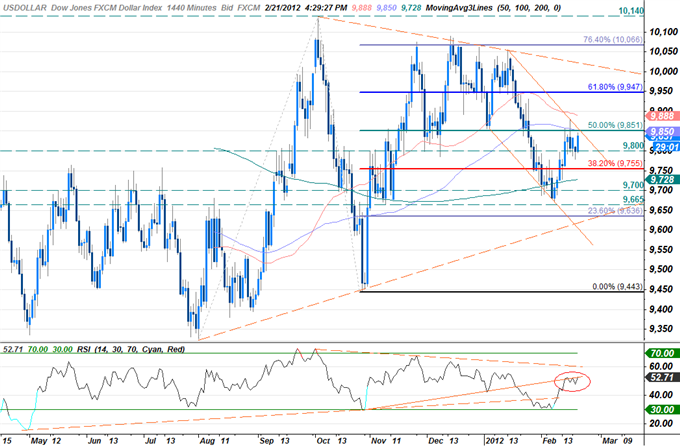 The greenback is firmer at the close of North American trade with the Dow Jones FXCM Dollar Index (Ticker: USDOLLAR) higher by 0.33% on the session. News that Greece had secured the next tranche of bailout funds failed to further stoke market sentiment with equity markets closing mixed on the session after paring early advances that saw the Dow test key psychological resistance at 13,000. The Dow and the S&P managed to post marginal gains of 0.12% and 0.07% respectively, with NASDAQ off by 0.11% on the day. Markets are now in a vulnerable state with today’s price action lacking conviction as investors continued to question stability in Europe and ongoing concerns regarding rising crude prices which hit a nine-month high above the $106-mark. The greenback steadily advanced under the radar throughout the session with the index now coming within striking distance of key resistance.

The dollar closed above the 9800 soft support target before pushing higher with the index looking to test the key convergence of channel resistance, the 100-day moving average, and the 50% Fibonacci extension taken from the August 1st and October 27thtroughs at 9850. This level remains paramount for further dollar advances with a topside break eyeing subsequent resistance targets at the 50-day moving average at 9880 and the 9900-level. Note that a break above former RSI support dating back to the October 27thlow the index may fuel the index with enough momentum to mount the 9850 level. 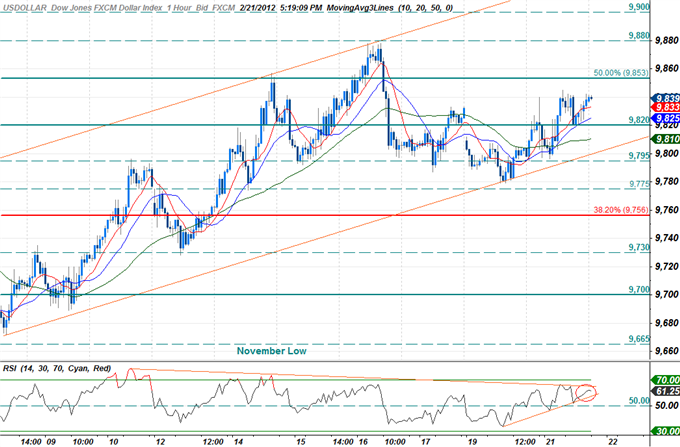 We’ve adjusted our ascending channel formation published last week to accommodate more recent price action with interim support holding at 9820. A break below channel support eyes subsequent support targets at 9795, 9775 and the 38.2% Fibonacci extension at 9755. Topside interim resistance holds at 9850 backed by 9880, 9900 and the 61.8% extension at 9950. A catalyst of some sort may be necessary to boost the dollar here with price action over the next 24-hours likely to remain in consolidation in the absence of any further headline risk.

The greenback advanced against all the component currencies highlighted by a 0.86% advance against the Australian dollar which moved a nearly 94% of its daily average true range. The aussie declined against all its major counterparts with the high yielder breaking its tight correlation with equity markets to close markedly lower on the session. The strongest performer of the lot was the euro which held its ground with a loss of just 0.06% as traders took to the sidelines awaiting further developments with regards to the terms by which Greece would receive the €130 billion in bailout funds. For complete euro and aussie scalp targets refer to today’s Winners/Losers report.

Tomorrow’s US economic docket is highlighted January existing home sales report with consensus estimates calling for sales to have increased by 1.1% m/m, up from a previous read of 5.0% m/m. The print would mark the lowest monthly read on home sales since September when sales dipped by 3% m/m. With many prominent figures calling for the bottom of the housing market, traders will be closely eyeing the data with a stronger-than-expected print likely to further fuel the risk trade at the expanse of the dollar.