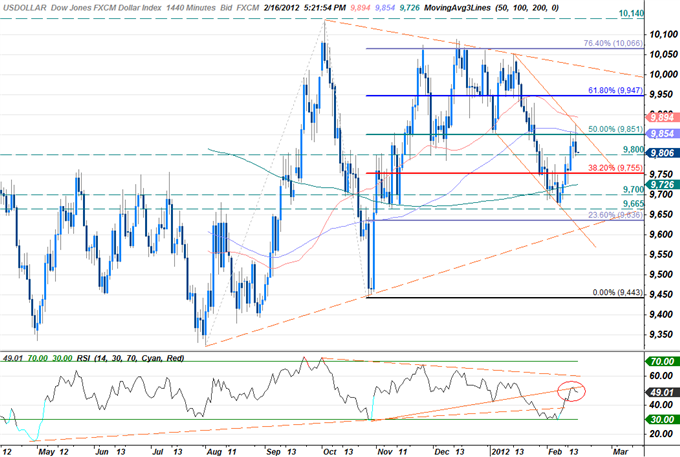 The greenback was markedly weaker at the close of North American trade with the Dow Jones FXCM Dollar Index (Ticker: USDOLLAR) off by 0.25% on the session. The dollar reversed early gains after a flurry of better-than-expected economic data on weekly jobless claims, housing starts, and building permits gave a boost to broader risk appetite with the dollar coming under pressure at the start of trade in New York. Optimism about the situation in Europe also helped support the risk trade despite growing tensions between Greece and Germany as newswires suggested that the debt laden country is likely to receive the next tranche of bailout funds ahead of the March deadline. Equities posted an impressive rally, closing just below session highs with the Dow, the S&P, and NASDAQ advancing 0.96%, 1.10%, and 1.15% respectively.

The dollar briefly broke above the 50% Fibonacci extension taken from the August 1st and October 27thtroughs at 9850 before quickly paring gains to close lower on the session. This level remains paramount for further dollar advances with the 100-day moving average and newly formed descending channel resistance resting just higher. A 3 wave advance off channel support suggests that the correctional pullback in the dollar may be complete with the daily relative strength index looking to rebound off former RSI support dating back to the October 27thlow. Accordingly, the dollar may remain under pressure heading into the close of the week as traders continue to eye improving US economic data. 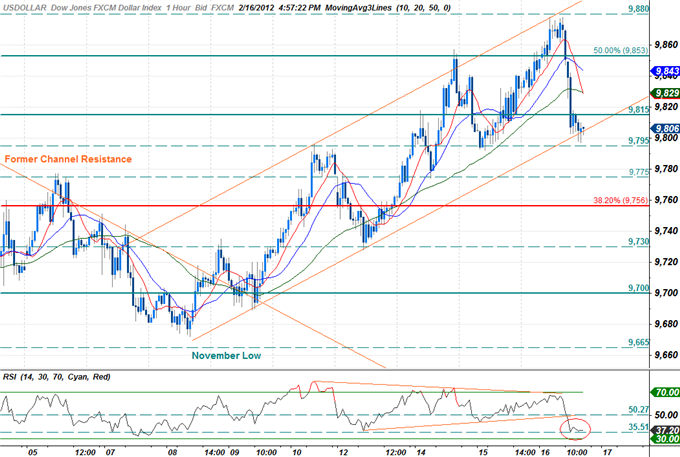 An hourly chart shows the severity of the dollar’s decline at the open of US trade with the index closing just above soft channel support dating back to February 8th. A break here eyes subsequent floors at 9775 the 38.2% extension at 9756, and 9730. Topside interim resistance now stands at 9815 backed by the 50% extension at 9850 and 9880. Look for an RSI break below support at 35 to signal further dollar declines with such a scenario eyeing subsequent downside targets.

The greenback declined against three of the four component currencies highlighted by a 0.70% decline against the British pound. The sterling advanced against all its major counterparts today just as US markets came online with the GBP/USD breaking key channel resistance early in the session. For complete scalp targets on the pound refer to this morning’s Winners/Losers report. The Japanese yen was the worst performer of the lot, sliding 0.56% against a weaker dollar as risk-on flows saw the low yielder come under substantial pressure. The yen fell against all its major counterparts, with the sterling taking the lead with an advance of 1.34% against.

Tomorrow’s US economic docket is highlighted January consumer price index and leading indicators. Inflation in the world’s largest economy is expected to ease with consensus estimates calling for a print of 2.8% y/y, down from a previous read of 3.0% y/y. Core prices are expected to hold at 2.2% y/y, underlying concerns regarding sticky prices in core products. While most of the “temporary” factors which fueled price growth during the crisis have since subsided, the pace of growth in core prices have not fallen since October of 2010 and may put pressure on the Fed to raise interest rates ahead of the “late 2014” pledge made back in January. The week wraps up with January leading indicators with estimates calling for a print of 0.50%, up from 0.40%. Look for the dollar to consolidate as traders scale back on exposure ahead of the weekend with more dollar losses likely next week.