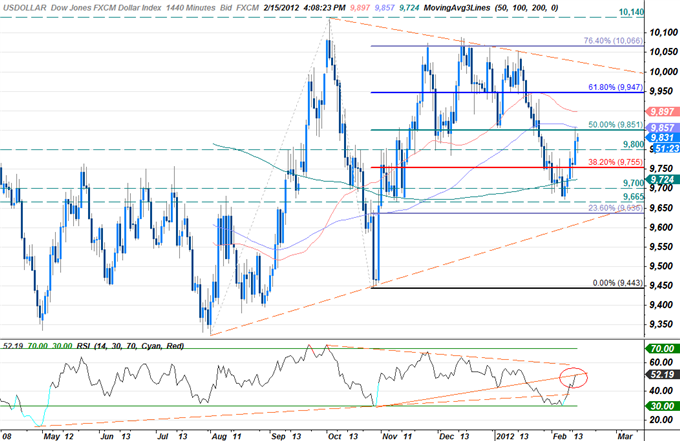 The greenback was virtually unchanged today with the Dow Jones FXCM Dollar Index (Ticker: USDOLLAR) shedding a mere 0.01% on the session. Equity markets pared early gains throughout the session as the overnight rally slowly eroded over streaming headlines out of Europe which suggested that policy makers were looking to delay the Greek bailout payment until the April elections. The attempt at delaying aid attests to the skepticism of policy makers with regards to Greece’s ability and commitment to implementing the harsh austerity measures required from the Trioka. Compounding the turndown in sentiment was the release of the FOMC minutes from the January 25th Fed policy meeting where board members discussed the likelihood of further quantitative easing. While the minutes provided little in the way of new information, the report showed dissention among Fed members with regards to whether or not more easing would be necessary with some calling for rates to rise as soon as 2013. Equities were markedly weaker at the close, albeit off session lows, with the Dow, the S&P, and NASDAQ off by 0.76%, 0.54%, and 0.55% respectively.

The dollar held above the 9800 resistance level topside daily targets eyed at the 50% Fibonacci extension taken from the August 1st and October 27thtroughs at 9850. This level remains paramount for further dollar advances with the 100-day moving average sitting just higher at 9856. Look for a break of the daily relative strength index above former RSI support dating back to the October 27th low to possibly trigger further gains with such a scenario likely to fuel the greenback with enough momentum to clear the topside targets previously mentioned. 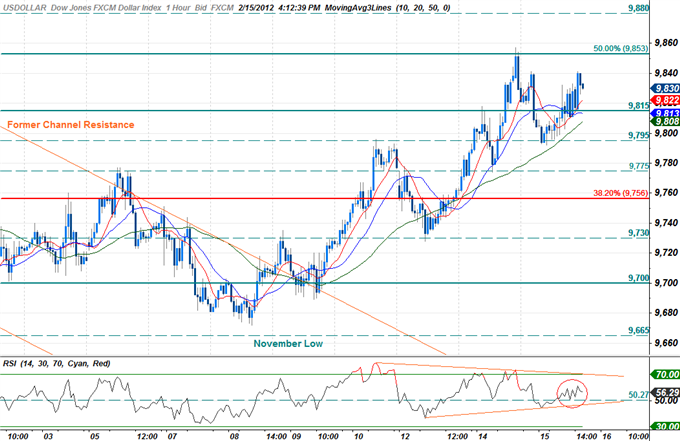 An hourly chart highlights congestion just above the 9815 interim support level with topside resistance holding at 9850 backed by 9880, 9900 and the 61.8% extension at 9950. A break below interim support eyes subsequent floors at 9795, 9775 and the 38.2% extension at 9755. Note that the relative strength index seems to be in consolidation with a break below RSI support likely to negate out short-term bullish bias on the index.

The greenback posted fractional declines against three of the four component currencies with the euro suffering the only loss with a decline of 0.50% on the session. The single currency remains at the mercy of the endless barrage of headlines coming out of Europe with indecision regarding the next tranche of Greek bailout funds likely to keep the single currency under pressure in the interim. For complete scalp targets on the euro refer to this morning’s Winners/Losers report.

Tomorrow’s US economic docket is highlighted by the January producer prices, housing starts, building permits, and the Philadelphia Fed. Producer costs are expected to have fallen last month with consensus estimates calling for a print of 4.1% y/y, down from a previous read of 4.8% y/y. Both housing starts and building permits are also expected to improve with starts seen rising by 2.0% m/m while permits are called higher by 1.3% m/m. With concerns over the depressed housing sector having come back into focus over the last couple of weeks, a stronger than expected print is likely to support risk appetite as many prominent figures have already called for a bottom in the sector. That said, any developments out of Europe will take precedence with the dollar likely to benefit from the ongoing stalemate among EU policy makers.