Too Soon to Fall In Love? USD Posts Largest Daily Advance in 5 Weeks 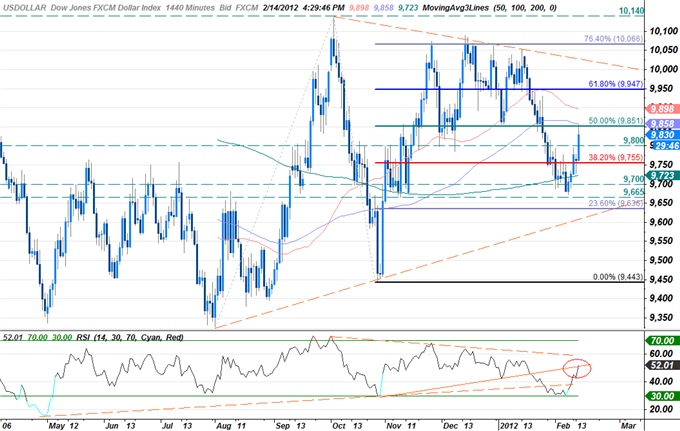 The greenback posted its largest daily advance since January 5th today with the Dow Jones FXCM Dollar Index (Ticker: USDOLLAR) advancing 0.72% on the session. Headline risk continues to weigh heavily on broader market sentiment with officials postponing tomorrow’s scheduled EU Finance Ministers meeting citing incomplete Greek paperwork as the cause. The move comes on the back of yet another round of sovereign debt downgrades, this time from Moody’s Investor Services. Equity markets tumbled throughout the session with stocks deep in the red before a rumor from Greek officials saw markets rebound sharply. Greek conservative leader Antonis Samaras vowed to back their commitment to the steep austerity measures required by the Troika in order to receive the next tranche of bailout funds to the tune of €130 billion ahead of next month’s deadline where the nation faces some €14 billion in bond redemptions and paybacks. Equities were mixed at the close with the Dow and NASDAQ eking out a gain of just 0.03% and 0.02%, while the S&P ended off 0.09%.

The dollar broke above the 9800 resistance level before tagging key Fibonacci resistance at the 50% extension taken from the August 1st and October 27thtroughs at 9850. This level remains paramount for further dollar advances with the 100-day moving average sitting just higher at 9858. Look for a break of the daily relative strength index above former RSI support dating back to the October 27th low to possibly trigger further gains with such a scenario likely to fuel the greenback with enough momentum to clear the topside targets previously mentioned. 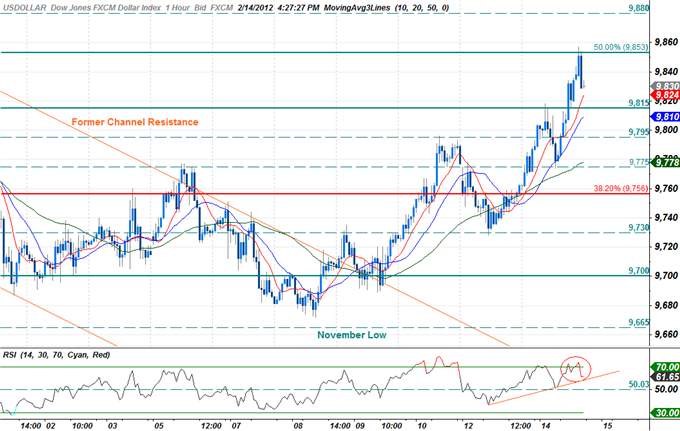 An hourly chart attests to the magnitude of the dollar’s advance with the index rebounding sharply off the 50% extension at 9850. Interim support now rests at 9815 backed closely by 9795, 9775 and the 38.2% extension at 9755. A breach above topside resistance eyes subsequent ceilings at 9880, 9900 and the 61.8% extension at 9950. Note that after today’s run-up the dollar may see some consolidation before moving higher with an RSI break below trendline support likely to see another test of the 9800 level.

The greenback advanced against all four component currencies highlighted by a 1.11% advance against the Japanese yen. The yen has remained under substantial pressure since GDP data showed an annualized contraction of 2.3% in Q4, grossly missing calls for a print of -1.3%. For complete scalp targets on the yen, refer to this morning’s Winners/Losers report. The Australian dollar was the top performer of the lot with a loss of just 0.48% on the session as classic haven flows saw investors jettison European holdings at a faster pace than that of the aussie ahead of key GDP data out of Germany in tomorrow. Despite today’s decline, the AUD/USD continues to trade within the confines of an ascending channel with only a confirmed break below 1.0645 offering conviction on further aussie declines.

Tomorrow’s US economic docket is highlighted by January industrial production data and the release of the minutes from last FOMC policy meeting. Consensus estimates call for industrial production to rise by 0.7% in January, up from a previous read of 0.4%. Investors will be closely eyeing minutes from the Fed policy meeting for clues into the central bank’s future policy with special emphasis put on discussions regarding further quantitative easing. Should the minutes reveal a growing rift within the board calling for additional QE, look for the dollar to come under pressure as traders seek to diversify out of the greenback as the central banks looks to restart the printing press.