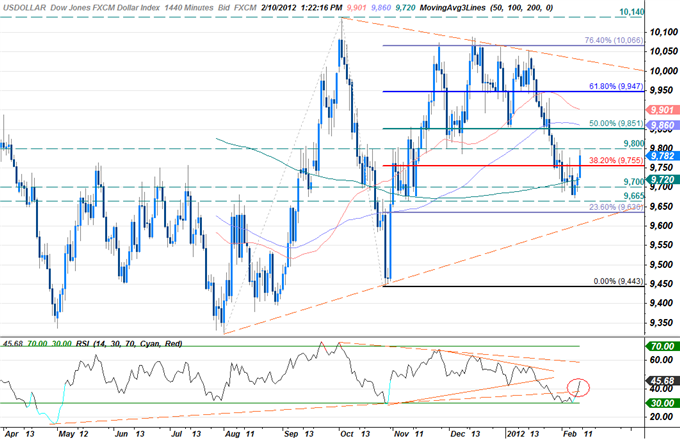 The greenback advanced for a third consecutive day in North America trade with the Dow Jones FXCM Dollar Index (Ticker: USDOLLAR) climbing 0.55% on the session. The move marks the first three day advance on the index since December 14th when the dollar hit a six-week high at 10,089. Faltering Greek debt-talks coupled with softer economic data out of the US and China weighed heavily on broader market sentiment with US stock indices off by 0.60%-0.90% across the board. The dollar has remained well supported as risk aversion flows gathered pace with investors jettisoning higher yielding assets in favor of the relative safety of US Treasuries, the dollar, and the Japanese yen.

The dollar broke back above the 38.2% Fibonacci extension taken from the August 1st and October 27thtroughs at 9755 before losing steam just ahead of the 9800 mark. The advance marks the largest single day advance for the greenback since January 5th and the dollar may now be poised for further advances next week as conditions in Europe continue to deteriorate. As noted in yesterday’s USD Trading report, the daily relative strength index broke back above former RSI trendline support dating back to the May 2nd low, providing further conviction on our medium-term bullish bias. 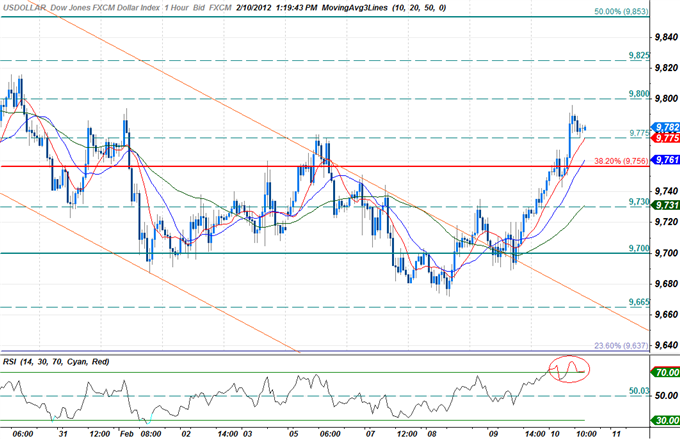 An hourly chart shows the dollar’s advance gathering pace after breaking above channel resistance dating back to January 15th with the index holding above soft support at 9775. Subsequent support targets rest lower at the 38.2% extension at 9756, 9730, and 9700. A breach above soft resistance at 9800 eyes topside targets at 9825, the 50% extension at 9850 and 9900. Note that RSI looks to close the session above overbought territory with the dollar likely to come under some pressure at the start of the week.

The greenback advanced against three of the four component currencies highlighted by a 1.01% advance against the Australian dollar. Risk-aversion flows, which often way heavily on the high yielder, were exacerbated by dovish remarks out of the RBA with the monetary policy statement released overnight noting further downside risks to the economy as the central bank lowered growth and inflation forecasts for 2012. The yen was the strongest performer of the lot with an advance of just 0.05% against a stronger dollar. Look for the yen to remain well supported so long as risk sentiment remains heavy with advances in both the yen and the greenback likely keep the exchange rate rather subdued. For complete scalp targets on the aussie and the yen refer to this morning’s Winners/Losers report.

With no data on the US economic docket until Tuesday, look for the dollar to continue to take cues off broader market sentiment with the dollar likely to remain well supported ahead of key parliament votes in Greece on Monday and Germany on Wednesday/Thursday. That said, it’s important to note that should Greece come up with a credible plan to reduce structural deficits to the satisfaction of the Troika, risk appetite could reverse sharply with such a scenario likely to weigh heavily on the greenback as traders jettison the reserve currency in favor of yields.