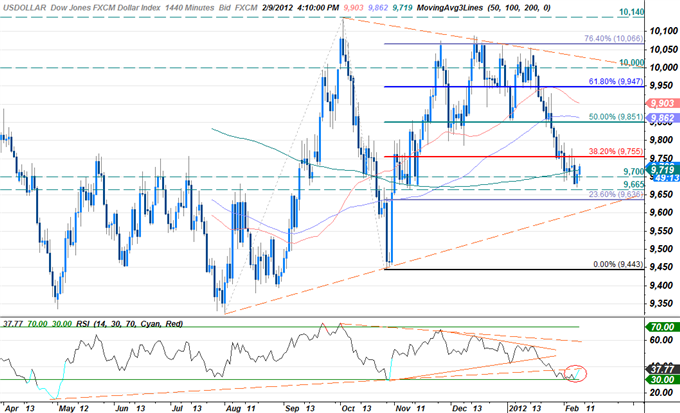 The greenback advanced for a second consecutive day in North American trade with the Dow Jones FXCM Dollar Index (Ticker: USDOLLAR) advancing 0.20% on the session. A lackluster performance in US equities saw stocks drift as euphoria regarding a possible Greek debt-swap deal quickly faded with the Dow, the S&P, and NASDAQ closing modestly higher by 0.05%, 0.15%, and 0.39% respectively. Markets have remained rather benign to economic data as the European crisis continues to dominate headlines with broader risk trends continuing to trade sideways throughout the session. The dollar has seen some bids amid the turmoil with the greenback making the first two-day advance since January 6th.

The dollar broke back above the 200-day moving average with the index closing just higher at 9729. The greenback remains at risk at these levels with only a breach above the 38.2% Fibonacci extension taken from the August 1st and October 27th toughs at 9755 alleviate further downside pressure. Note that the daily relative strength index now looks poised for a break back above former RSI support dating back to May 2nd with such a scenario eyeing subsequent topside targets above 9755. 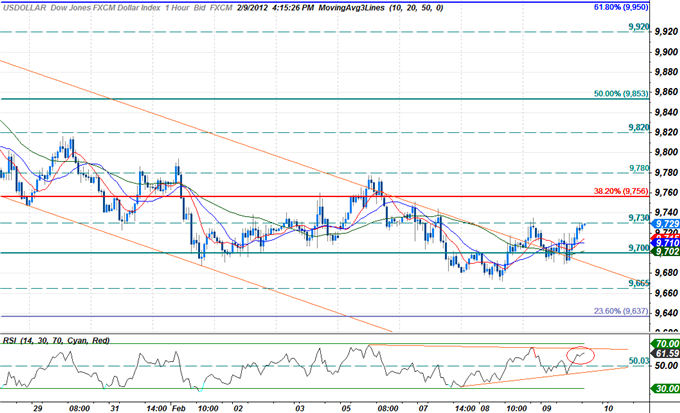 An hourly chart shows the index breaking above channel support dating back to January 15th with the dollar closing just below soft resistance at 9730. A breach above this level eyes intra-day targets at the 38.2% extension at 9755, 9780, and 9820. Stronger resistance is seen at the 50% Fibonacci extension at 9850. Interim support rests at 9700 backed by key support at the November lows at 9665, and the 23.6% extension at 9637. Look for a break above RSI resistance dating back to the February 5th highs to trigger an intra-day topside advance for the dollar.

The greenback advanced against three of the four component currencies highlighted by a 0.84% advance against the yen. Today’s move marks the largest one-day advance in the USD/JPY since January 24th and temporarily eases immediate concerns of further intervention efforts form the Japanese Finance Ministry. Look for the pair to remain well supported so long as broader market risk appetite remains afloat. The euro was the top performer of the lot with an advance of 0.17% against the dollar. The single currency has remained rather resilient in the face of ongoing speculation on Greece and increased headline risk. On a daily perspective, the euro has continued to trade within the confines of an ascending channel formation with the structure looking to be in the process of completing wave three of the advance off the January 16th low at 1.2625. Barring any further negative headlines out of Europe, look for the EUR/USD to remain well supported with only a break below 1.3040 risking substantial losses for the euro.

Tomorrow’s US economic docket is highlighted by the December trade balance and the University of Michigan confidence survey. Consensus estimate call for the US trade deficit to fall to $48.1B from a previous print of $47.8B, with the confidence survey expected to ease to 74.8 from 75.0. With the situation in Greece still looming over markets, the dollar will continue to take cues from broader market sentiment with only a shift into risk-aversion likely to accelerate the dollar’s recent ascent.