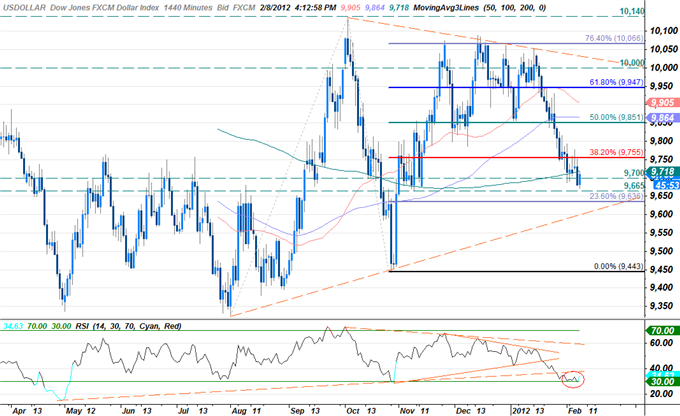 The greenback is firmer at the close of North American trade with the Dow Jones FXCM Dollar Index (Ticker: USDOLLAR) advancing 0.23% on the session. Risk appetite saw a dramatic reversal today as equity markets pared early gains and the dollar found its footing. The Troika released the terms required of Greece in order for the debt laden country to receive the next €130 billion bailout tranche ahead of next month’s deadline when some €14 billion in bond redemptions and paybacks are due. While optimism remains that Greek officials will indeed reach a consensus on the required measures, the draft released today suggest a harsh reality for the Greek people. In order for Greece to receive further aid the nation must pledge to cut an additional 15,000 state jobs in 2012, cut minimum wages by 20%, and accelerate labor and product market reforms among other stipulations. While the measure aim to increase the nations competitive advantage, given the current economic environment there are concerns that further austerity will weigh on growth prospects amid an expected “mild recession” in Europe. Still, markets found solace on the news with stocks managing to close in the black with the Dow, the S&P, and NASDAQ higher by 0.04%, 0.22%, and 0.41% respectively.

The dollar rebounded ahead of the November lows cited in yesterday’s report at 9665 before settling just below the 200-day moving average at 9718. The greenback now looks to hold here with the daily relative strength index rebounding off the 30-oversold level. Only a break above former RSI support dating back to May 2nd would alleviate some of the pressure for the greenback with such a scenario eyeing topside targets above 9700.Initial support now comes into play at the November lows at 9665. 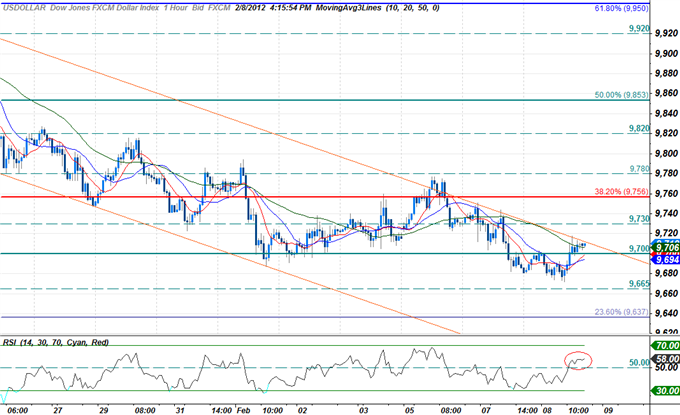 An hourly chart shows the index continuing to hold within the confines of a descending channel formation dating back to January 15thwith the dollar closing just below channel resistance. A topside break of the formation eyes subsequent resistance targets at 9730, the 38.2% Fibonacci extension taken from the August 1st and October 27th troughs at 9755, and 9780. Should the channel hold, look for the index to encounter support at 9665 backed by the 23.6% extension at 9637 and 9600.

The greenback advanced against all four component currencies today highlighted by a 0.48% advance against the British pound. The sterling was the worst performer on the session with the pound falling against all of its major counterparts as traders jettisoned the currency ahead of tomorrow’s crucial BoE interest rate decision. While the central bank is widely expected to hold interest rates at 0.50%, traders will be carefully eyeing the bank’s asset purchase target with consensus estimates calling for the facility to increase to £325 billion from £275 billion. The euro was the strongest performer of the lot with a loss of just 0.02% on the session. Hopes for some type of resolution have continued to prop up the single currency with the euro closing just below fresh 2012 highs at 1.3285. For complete scalp targets on the euro and the sterling refer to this morning’s Winners/Losers report.

On the data front, the US docket is relatively light with only initial and continuing jobless claims and December wholesale inventories on tap. Inventories are seen rising to 0.5%, up from a previous read of 0.1%, while weekly claims are expected to tick higher to 370K from 367K. Further developments out of Europe will undoubtedly take center stage tomorrow with EU finance ministers due to gather in Brussels for an emergency meeting as Greek officials scramble to complete talks on the terms of the Troika draft. Look for the dollar once again to take cues from broader market sentiment with a clearer outlook on the European crisis likely to further fuel the risk rally at the expense of the dollar. However should conditions deteriorate further or officials fail to find consensus on the proposed austerity measures, look for the dollar to move higher on classic haven flows.

Join Michael tomorrow for a Live Scalping Webinar at 1500GMT (10ET) to discuss the dollar and other current setups.