200 Day Moving Average Holds the Key for US Dollar Index 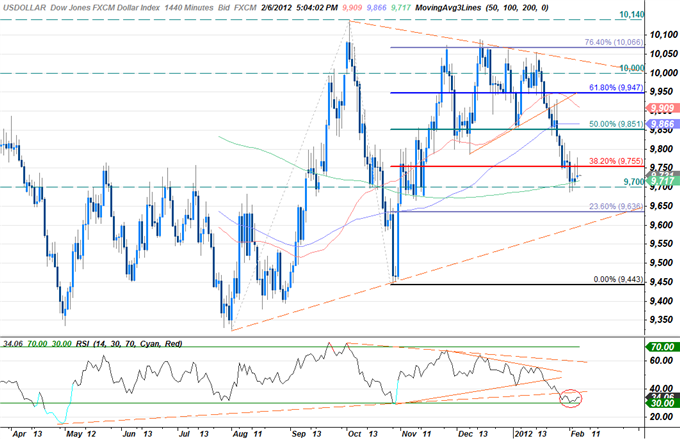 The greenback was firmer at the close of North American trade with the Dow Jones FXCM Dollar Index (Ticker: USDOLLAR) advancing 0.13% on the session. Equity markets went back on the defensive today as concerns regarding the European sovereign debt crisis returned with Greek negotiations on the troika requirements for further aid continuing to tread water. As EU officials insist on steeper austerity in the debt laden country, Greek officials have remained hesitant in the face of overwhelming civil unrest with a 24-hour general strike scheduled for tomorrow. The strike is expected to affect central and local government offices, schools, public transportation, banks, and force hospitals to operate on a limited skeleton staff as thousands take to the streets in opposition to the austerity measures required for Greece to receive the next €130 billion bailout tranche. Without these funds, the nation faces a possible disorderly default with €14.4 billion in bond redemptions due next month. Stocks were weaker on the day but closed well off session lows with the Dow, the S&P, and NASDAQ closing off by 0.13%, 0.04%, and 0.13% respectively.

The dollar continues to hold above key support at 9700 today with the index closing just above the 200-day moving average at 9717. A failed attempt at a breach above the 38.2% Fibonacci extension taken from the August 1st and October 27th troughs at 9755 does not bode well for the greenback with the daily relative strength index offering little in the way of support as it holds just above oversold territory. Only a break above former RSI support dating back to May 2nd would alleviate some of the pressure for the greenback with such a scenario eyeing topside targets above 9800. 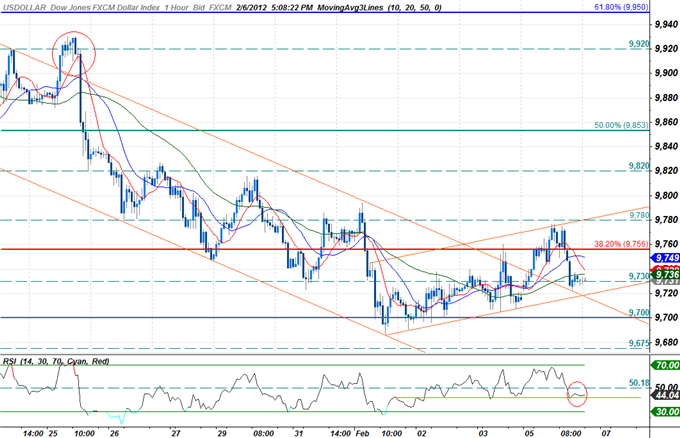 An hourly chart shows the index breaking above channel resistance dating back to January 15th before pulling back with the dollar finding solace the 9730 soft support level. The greenback now looks to be trading within a newly formed ascending channel formation with a break back above the 38.2% extension eyeing subsequent topside targets at 9780, 9820, and the 50% extension at 9853. A break back below former channel resistance, now support, risks substantial losses for the dollar with subsequent floors seen at 9700, 9675, and the 23.6% extension at 9636.

The greenback advanced against two of the four component currencies highlighted by a 0.41% advance against the Australian dollar. The aussie was weaker today as classic haven flows saw the high yielders come under pressure as traders jettisoned riskier assets in favor of the dollar, the yen, and US Treasuries. The aussie remains at risk ahead of tonight’s RBA interest rate decision where the central bank is widely expected to cut rates by 25 basis points. The euro also came under attack although the single currency pared a large portion of the overnight decline in early US trade, with the euro off by just 0.21% at the close of trade in New York. The yen was the top performer with a fractional advance of just 0.07% as risk aversion flows propped up the low yielder despite broad based gains in the dollar. Again we note that yen advances are likely to remain tempered as intervention concerns continue to limit any substantial intra-day yen gains.

On the data front, the US docket remains relatively light tomorrow with the December consumer credit report highlighting the calendar. Consensus estimates call for a print of $7 billion, down from a previous read of $20.37 billion a month earlier. Data aside, investors will be lending a keen ear to remarks from Fed Chairman Ben Bernanke as he testifies before the Senate budget committee tomorrow morning. Although Bernanke is widely expected to reiterate remarks made at the FOMC announcement last month, investors will be eager to see how he responds to increased scrutiny from senate members in light of Friday’s blow-out non-farm payroll report which topped even the most optimistic estimates with a print of 243K jobs. Should the chairman soften his dovish tone, look for the dollar to remain well supported as with a close above 9756 boding well for further dollar advances.