The Calm Before the Storm? US Dollar Quiet Today, but NFPs Loom 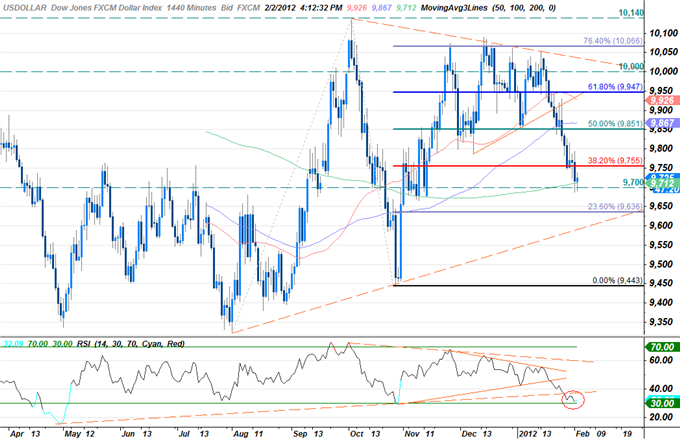 The greenback was fractionally higher at the close of North American trade with the Jones FXCM Dollar Index (Ticker: USDOLLAR) posting a marginal advance of just 0.03% on the session. Equity markets posted a lackluster performance in US trade ahead of tomorrow’s highly anticipated non-farm payroll employment report. As is often the case ahead of the highly publicized print, equities dipped in and out of positive territory throughout the session with the Dow off by a mere 0.09% on the session while the S&P and NASDAQ advanced a modest 0.11% and 0.40% respectively.

The dollar managed to hold above soft support at 9700 today with the index closing just above the 200-day moving average at 9712. The reserve currency remains at risk however ahead of tomorrow’s substantial event risk with the daily relative strength index attempting to rebound off its lowest levels since October 27th when the dollar saw a massive decline of more than 160pips on the back of the European summit where officials announced an increase in Europe’s bailout fund. Only a break above former RSI support dating back to May 2nd would alleviate some of the pressure for the greenback with such a scenario eyeing topside targets above the 38.2% Fibonacci extension taken from the August 1st and October 27th troughs at 9755. 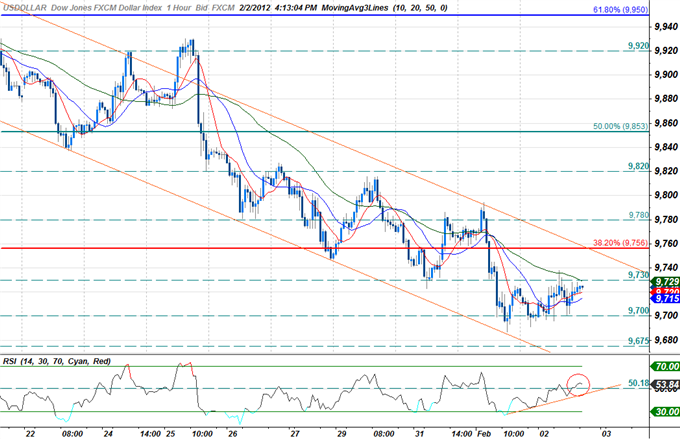 An hourly chart shows the index continuing to trade within the confines of a descending channel formation dating back to January 15th with the dollar holding above soft support at the 9700 mark. Subsequent support targets are eyed lower at 9675, the 23.6% extension at 9635, and 9600. A breach above channel resistance eyes immediate topside targets at the 38.2% extension at 9756, 9780 and 9820.

The greenback saw little in the way of volatility against the component currencies with the performance chart highlighting a 0.18% advance against the British pound. The sterling has remained rather resilient over the past few weeks with the GBP/USD posting strong advances on risk-on rallies but staying rather numb to risk sell-offs. With the Fed’s pledge to anchor interest rates through late 2014, the pound seems to be slowly taking on the roll of a haven asset with the performance of the EUR/GBP over the past week suggesting that capital flows from the euro-region into the sterling have remained well supported.For complete scalp targets on the pound, refer to this week’s Scalp Report. The euro was slightly weaker with a decline of 0.11% while the yen and the aussie held their ground with marginal advances of 0.04% and 0.02% respectively.

All eyes now fall on the US non-farm payroll report tomorrow morning with consensus estimates calling for the addition of 145k jobs in January. The print comes off a previous read of 200K in December with the unemployment rate expected to hold at 8.5%. The dollar stands to gain from an extreme print on tomorrow’s report with an extremely weak print likely to fuel short-term risk aversion flows into the greenback while an extremely strong print would reduce speculation of further dollar diluting quantitative easing from the Federal Reserve. An at consensus print or slightly higher is likely to further support the recent rally in risk with the dollar risking substantial losses with a move below the 9600. While NFP’s have typically generated volatility in FX pairs, tomorrow’s print will be used as a gauge for the probability of further monetary easing as the central banks’ policy continues to weigh on longer-term dollar prospects. Later in the session traders will be eyeing the ISM non-manufacturing composite with estimates calling for a print of 53.2, up from a previous read of 52.6. Look for the dollar to take cues off tomorrow’s data-flow with the event risk possibly acting as the catalyst needed to reverse the recent decline in the world’s reserve currency.