USD Breaks Critical Support- Index at Risk Ahead of Bernanke 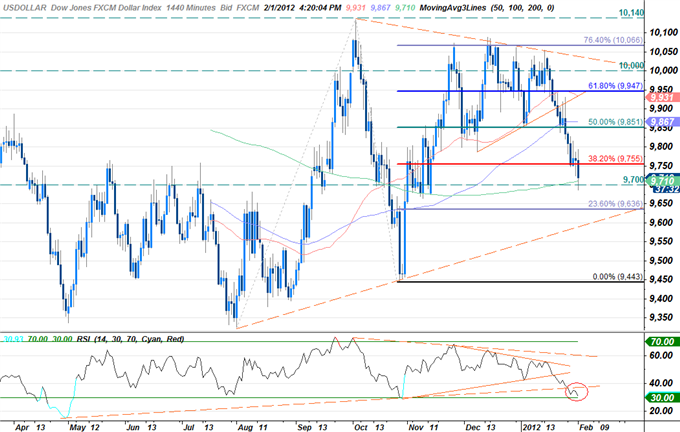 The greenback is markedly weaker at the close of North American trade with the Dow Jones FXCM Dollar Index (Ticker: USDOLLAR) off by a nearly 0.50% on the session. Data out of China, Germany, the UK, and the US all showed expansion in the manufacturing sector with high beta assets advancing as investors chased yields at the expense of the reserve currency. The rally in European equities carried over in the US session with the Dow, the S&P, and the NASDAQ closing off session highs for an advance of 0.66%, 0.89%, and 1.22% respectively. While no deal has yet been announced with regards to a haircut on Greek debt, speculation continues to circulate that a deal is at hand with markets remaining optimistic that a resolution will be reached on private sector involvement (PSI). And while Germany has continued to call for steeper cuts, negotiations may have reached an impasse as the ECB remains steadfast with regards to not taking a hit on Greek holdings. Nevertheless, markets have continued to push higher with all eyes now fixated on Fed Chairman Bernanke’s testimony before congress and Friday’s non-farm payroll report.

The dollar broke below key support at the 38.2% Fibonacci extension taken from the August 1st and October 27th troughs at 9755 before rebounding off soft support at 9700 to close above the 200-day moving average at 9710. Dollar prospects have remained on shaky ground over the past few weeks with the index declining 11 out of the past 13 sessions. The index is now at critical levels and faces substantial downside risks as higher yielding risk currencies continue to push higher. The daily relative strength index is now at its lowest level since October 27th when the dollar saw a massive decline of more than 160pips on the back of the European summit where officials announced an increase in Europe’s bailout fund. Interestingly enough, the decline was completely retraced two days later when the Bank of Japan intervened to curb the yen’s rapid appreciation. 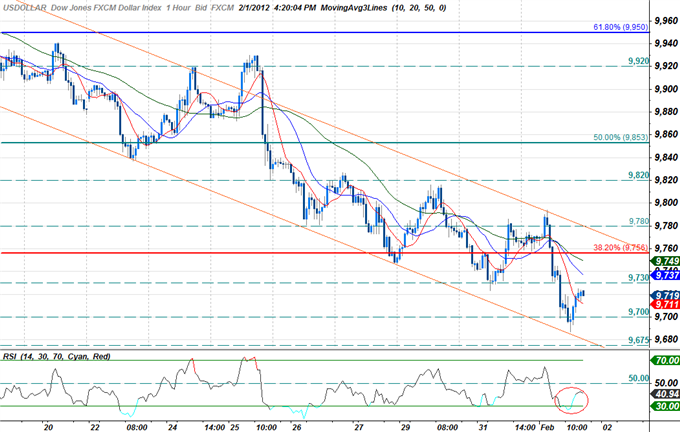 An hourly chart shows the index continuing to trade within the confines of a descending channel formation dating back to January 15th. The index closed off session lows after rebounding off channel support to settle at 9719. Soft resistance holds at 9730 backed by the 38.2% extension at 9756 and 9780. Should this channel formation hold over the next 24-48 hours, look for support lower at 9700, 9675, and the 23.6% extension at 9636.

The greenback fell against all four component currencies highlighted by a 0.75% decline against the Australian dollar. Interest rate differentials continue to benefit the aussie as investors go back on the hunt for yields with the AUD/USD advancing 3.88% since the start of 2012. The euro also posted a modest 0.57% advance as the ECB propped up peripheral bond markets amid ongoing negotiations regarding a haircut on Greek debt. The sterling continued its advance with a gain of 0.45% on the back of a stronger than expected manufacturing PMI which topped expectations with a print of 52.1, besting calls for a flat read of 50. For complete scalp targets on the pound, refer to this week’s Scalp Report. The yen was the weakest performer of the lot with a gain of just 0.08% as risk-on flows weighed on the low yielder. The yen was weaker against all its major counterparts save the dollar as losses in the reserve currency continue to outpace those of the yen.

On the data front, all eyes will be on Fed Chairman Ben Bernanke tomorrow as he testifies before the house budget committee. Although Bernanke is likely to reiterate remarks made at last week’s FOMC interest rate decision, investors will be lending a keen ear to the barrage of questions posed to the Chairman on the heels of the central bank’s decision to anchor rates through late 2014. Look for the dollar to find some support should Bernanke soften his dovish tone on monetary policy with the greenback likely to hold its recent range as we head into Friday’s much anticipate non-farm payroll print.