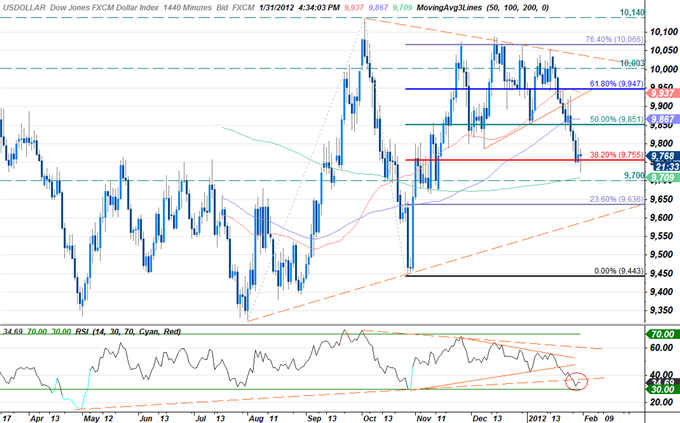 The greenback is slightly softer at the close of North American trade with the Dow Jones FXCM Dollar Index (Ticker: USDOLLAR) off by a fractional 0.9% on the session. Risk appetite quickly subsided at the open after weaker than expected US economic data saw risk assets come off sharply as the dollar pulled back above key support at 9755. Weakness in the housing market continues to loom over the economy with today’s Case-Shiller home price report showing that home prices had fallen 3.67% y/y in November, topping expectations for a decline of 3.30% y/y. Consumer confidence data followed with the January print grossly missing consensus estimates with a print of 61.1, down from a previous read of 64.8. Markets were anticipating an eleven month high print of 68.0 for the month of January. US equity markets promptly reversed gains with the major indices closing mixed on the session after spending the bulk of the day paring losses with the Dow and the S&P off by 0.16% and 0.05% while the NASDAQ eked out a marginal gain of 0.07%.

The dollar briefly broke below key support at the 38.2% Fibonacci extension taken from the August 1st and October 27th troughs at 9756. This level remains paramount for the reserve currency with a break below here risking substantial losses as we head into February. While we noted yesterday that the daily relative strength index looked to be reversing course after breaking below RSI trendline support dating back to May 2nd, the oscillator has since flat lined, providing us little in the way of directional bias. That being said, as seasonality trends dictate we look for renewed dollar strength in early February noting that a break below key support eyes the 200-day moving average just above 9700 with topside targets held at the 50% extension at 9850. 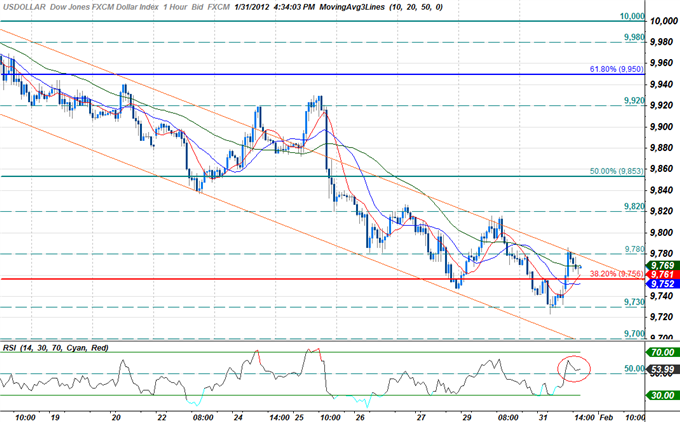 An hourly chart shows the index continuing to trade within the confines of a descending channel formation dating back to January 15th. A failed test of channel resistance in intra-day trade saw the index settle above the key 38.2% extension at 9756. A topside break above 9780 eyes subsequent resistance targets at 9820, the 50% extension at 9850, and 9920. Should this channel formation hold over the next 24-48 hours, look for support lower at 9730, 9700 and 9675.

The greenback declined against three of the four component currencies highlighted by a 0.29% decline against the British pound, which was the topic for today’s Scalp Report. The pound has now rallied eleven of the past twelve sessions with the sterling rebounding off key Fibonacci resistance just shy of the 1.58-handle. This level remains a crucial cap to further topside advances with a breach here exposing significant risk to the dollar. The euro was the worst performer of the lot with a decline of nearly 0.50% against the dollar as ongoing concerns regarding stalled Greek PSI talks weighed on demand for the single currency. The pair broke below channel support dating back to the January 15th lows in intra-day trade with the euro now risking further downside moves eying subsequent support targets at 1.3040 and the 1.30-figure.

Tomorrow’s US economic docket is highlighted by the January ISM manufacturing report, the ADP employment report, and December construction spending. Often used as a pre-cursor to the more encompassing non-farm payroll report which is released on Friday, the ADP employment change is expected to show the addition of 185K private sector jobs in January. While the data has often missed substantial spikes in NFP prints, traders will be undoubtedly looking for a strong read ahead of Friday’s crucial print. The ISM manufacturing report is released soon after with estimates calling for a print of 54.5, up from a previous read of 53.9 as the manufacturing sector continues to show signs of improvement. The pace of growth in construction spending is widely expected to soften further with the street eyeing a print of 0.5% m/m, down from previous read of 1.2% m/m. The data would further reinforce recent data out of the housing sector, suggesting the market remains on shaky ground as house prices and pending/existing home sales fell in December. The data has the capacity to further weigh on broader market sentiment after a string of better than expected data over the past few weeks continued to prop up the risk trade. Look for the dollar to move higher as investors go back on the defensive with the dollar acting as the chief beneficiary of risk aversion flows.