US Dollar Index Rebounds Off Key Support- Is It Time To Buy? 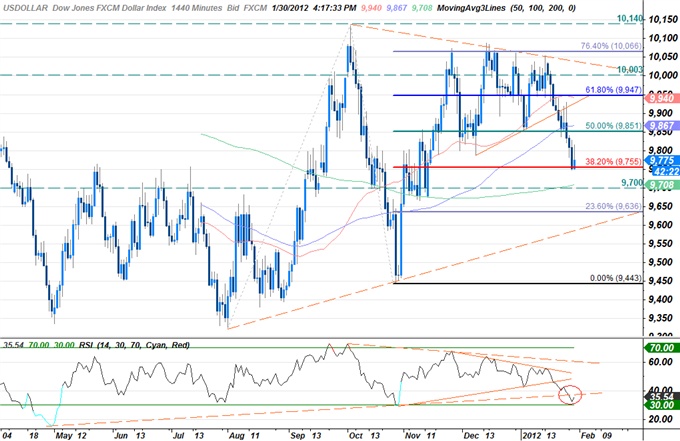 The greenback is firmer at the close of North American trade with the Dow Jones FXCM Dollar Index (Ticker: USDOLLAR) higher by 0.28% on the session. Equity markets were sharply down at the open as a wave of risk aversion carried over from Europe with the major indices coming under substantial pressure in early trade. Stocks closed well off their lows however as risk drifted higher throughout the session with the Dow, the S&P, and the NASDAQ off 0.05%, 0.25%, and 0.16% respectively at the close of trade. Economic data out of the US was mixed today with December personal income posting its largest advance in nine months with a read of 0.5%, topping expectations for a print of 0.4%. Personal spending however was flat as households upped savings amid uncertainty about the domestic economy. When adjusted for inflation, spending contracted by 0.1% in December halting a three month advance discretionary spending. News filtering out of the EU leaders meeting in Brussels temporarily eased some concerns after newswires reported that leaders had reached an agreement on a new fiscal accord between member nations. However there were no talks with regards to Portugal which saw yields on 10-yr paper top a record 17% today.

The dollar rebounded off key support at the 38.2% Fibonacci extension taken from the August 1st and October 27th troughs at 9757 today. This level remains paramount for the reserve currency with a break here risking substantial losses as we head into February. Note that although the daily relative strength index did break below trendline support dating back to May 2nd, the move quickly reversed course ahead of the 30-oversold mark and bodes well for the dollar. Daily support below this key level is eyed at the 200-day moving average just above 9700 with topside targets held at the 50% extension at 9850. 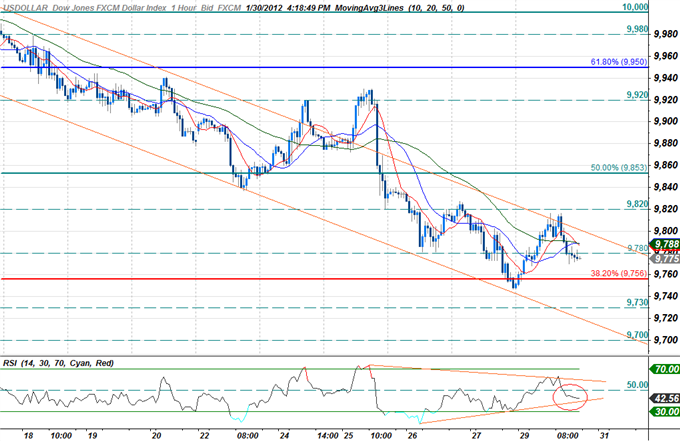 An hourly chart shows the index continuing to trade within the confines of a descending channel formation dating back to the January 15th highs. Interim support continues to hold at the 38.2% extension at 9756 backed by 9730 and 9700. A breach above channel resistance eyes subsequent ceilings at 9820, the 50% extension at 9850 and 9920. Look for an RSI topside break above trendline resistance to target subsequent topside targets with an advance above 9850 providing further justification to press the dollar higher.

The greenback advanced against three of the four component currencies highlighted by a 0.70% advance against the euro. The single currency remains at risk at these levels after rallying more than 1.35% since the start of 2012, with a break back below the 200-day moving average at 1.3070 risking further euro weaknesses. As yields on periphery debt continue to climb look for the EU debt crisis to come back into focus with last month’s rally offering optimal entry for the bears. Look for the breakdown in the euro to gather pace later in the week with only a move above 1.33 negating our downside bias. The yen was the top performer against the dollar with an advance of 0.48% on the session. Like the dollar, the Japanese yen continues to benefit from risk-aversion flows as traders jettison higher yielding risk assets in favor of the relative safety of the greenback, the yen, and US Treasuries. Still, advances in the yen outpaced those of the dollar today, with further weakness in the USD/JPY pair certain to test the resolve of Japanese officials who continue to cite concerns over the currencies rapid appreciation. Look for these advances in the yen to remain tempered as investors go back on intervention watch.

Tomorrow’s US economic docket is highlighted by the January consumer confidence report with consensus estimates calling for confidence to improve with a print of 68.0, up from a previous read of 64.5. The print would mark an eleven-month high on the report and is likely to fuel strength in risk assets as domestic data continues to suggest the recovery is on proper footing. As we’ve noted in previous reports, we look for the dollar’s inverse relationship to asset prices to begin to decouple later this year as growing concerns regarding global growth and better domestic prospects prompt capital flows into the greenback. The dollar remains at risk into the close of the month with dollar weakness expected to taper off later in the week as seasonality trends dictate.