US Dollar Bulls Await 9750 To Begin the Next Stampede 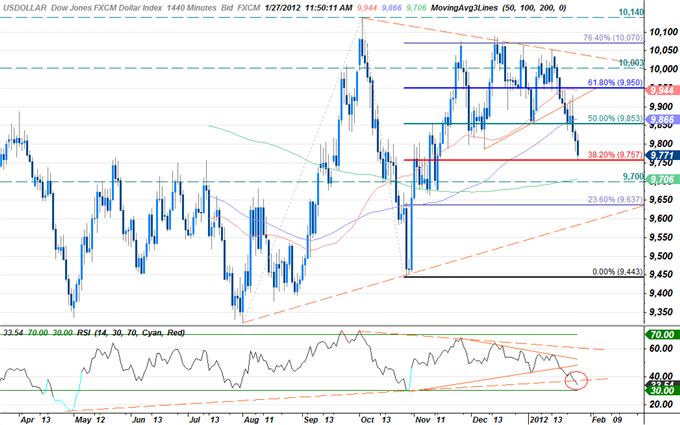 The greenback is softer in North American trade with the Dow Jones FXCM Dollar Index (Ticker: USDOLLAR) off by 0.45% at noon in New York. US data was mixed this morning with the 4Q annualized GDP print missing estimates with a print of 2.8% q/q. Expectations were calling for a read of 3.0% q/q after a meager 1.8% q/q print in September. Personal consumption data was also weaker than expected with a print of 2.0%, missing calls for a read of 2.4% but up from a previous print of 1.7%. The University of Michigan confidence surveys topped consensus with a print of 75.0 besting calls for a hold at 74.0. Equity markets are mixed half way through the session with the Dow and the S&P off by 0.63% and 0.33% while the NASDAQ advanced by 0.17%.

The dollar continues to eye key Fibonacci support at the 38.2% Fibonacci extension taken from the August 1st and October 27th troughs at 9757. This remains paramount for the greenback with a break below eyeing the convergence of the 200-day moving average and the 9700 support level. Note that RSI now looks to have broken below trendline support dating back to May 2ndwith the dollar remaining at risk here should the 9757 level be compromised. 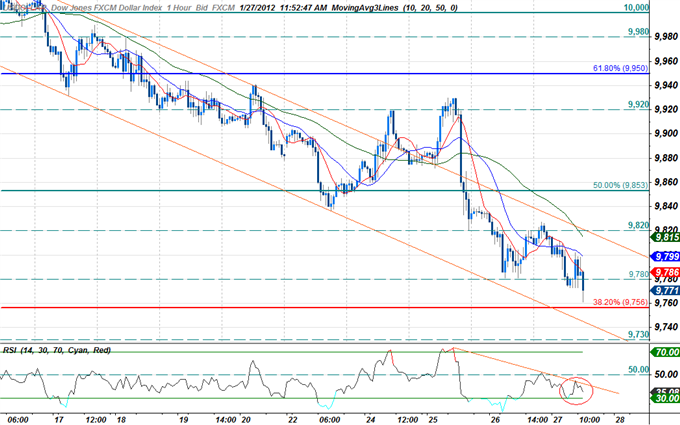 An hourly chart shows the index continuing to trade within the confines of a descending channel formation dating back to the January 15th highs. Interim support now rests at the 38.2% extension at 9756 backed by 9730 and 9700. A breach above channel resistance eyes subsequent ceilings at 9820, the 50% extension at 9850 and 9920. Look for an RSI topside break above trendline resistance to target subsequent topside targets with an advance above 9850 boding well for further dollar strength.

The greenback fell against all four component currencies highlighted by a 0.97% decline against the Japanese yen. The yen has now retraced the entire decline seen on Tuesday and Wednesday with the USD/JPY now off by 0.42% on the week. Advances in the yen defied Japanese official’s pledge to combat further appreciation in the currency as it continues to weigh on the export driven economy. Again we note that as we continue to approach the 76-handle advances are likely to remain tempered as investors remain cautious of further Japanese intervention. The euro remains well supported as speculation regarding a possible agreement with private investors holding Greek debt continues to circulate, with rumors of a possible accord being reached this weekend. The aussie was the weakest performer with a gain of just 0.07% as a sell-off in risk assets in US trade weighs on the high yielder. For complete AUD/USD scalp targets refer to this week’s Scalp Report.

The US economic docket picks up on Monday with December personal spending, income and consumption highlighting the calendar. Growth in spending and core consumption is widely expected to hold at 0.1% while income is expected to rise by 0.40% from a previous print of 0.10%. The data is likely to reinforce improving conditions in the domestic economy albeit less robust than one would like. The dollar remains at risk into the close of the month with dollar weakness expected to taper off mid-to-late next week as seasonality trends dictate.