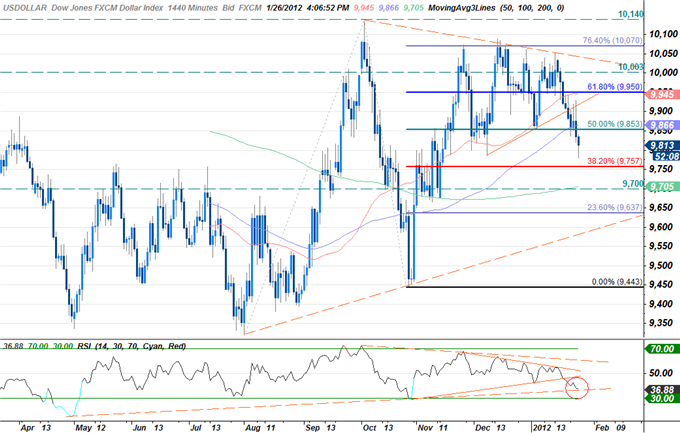 The greenback is softer at the close of North American trade with the Dow Jones FXCM Dollar Index (Ticker: USDOLLAR) off by a mere 0.16% on the session. A strong open in equity markets slowly eroded throughout the course of the day as optimism regarding the Fed’s decision to anchor rates until late 2012 fizzled with the Dow, the S&P, and the NASDAQ ending the session off 0.18%, 0.57%, and 0.46% respectively. US economic data was mixed today with December durable goods topping expectations while initial jobless crept higher with a print of 377K, up from 356K a week earlier. Weaker data came later in the day with December new homes sales unexpectedly falling 2.2% m/m, missing calls for positive print of 1.9% m/m. The data marks the first decline in four months and fueled ongoing concerns about the depressed housing sector with the print closing out the weakest year on record for home builders.

The dollar reversed course mid-day ahead of the 38.2% Fibonacci extension taken from the August 1st and October 27th troughs at 9757 before settling at 9813 at the close of trade in New York. As noted yesterday, the daily relative strength index continues to hold above RSI support dating back to the May 2nd low and a key reversal here would bode well for the greenback after declining 8 out of the past 9 sessions. Daily resistance now stands at the 50% extension at 9850 with a breach above the 100-day moving average at 9866 putting us back on the long side for the reserve currency. 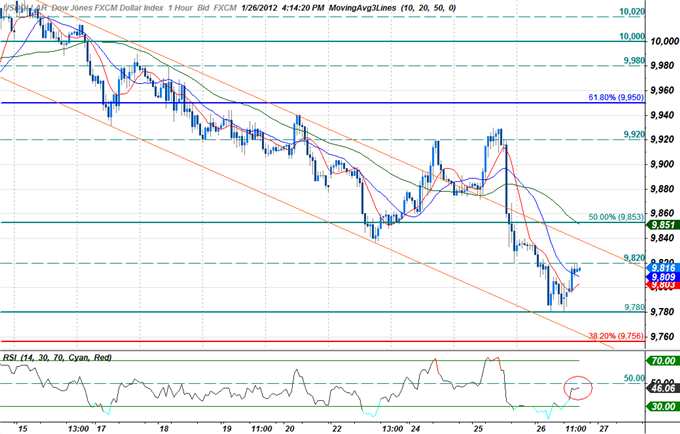 An hourly chart shows the index continuing to trade within the confines of a descending channel formation dating back to the January 15th highs. Interim support now rests at 9780 backed by the 38.2% extension at 9756 and 9730. Topside resistance holds at 9820 with a topside break above channel resistance eyeing subsequent targets at the 50% extension at 9850 and 9920. The dollar’s rebound may gather pace as traders close out dollar shorts ahead of the weekend with an RSI break above 50 eyeing topside targets in intra-day trade.

The greenback declined against three of the four component currencies highlighted by a 0.44 decline against the Japanese yen. The USD/JPY has seen a surge in volatility over the past few sessions with the pair’s daily ATR approaching 40 for the first time since December 19th. Despite the low yielder’s advance today, yen gains are likely to remain tempered as intervention concerns loom with the key support for the pair eyed at the 38.2% Fibonacci extension taken from the November 18th and January 4th toughs at 77.25. The aussie and the sterling also posted modest advances of 0.21% and 0.25% respectively. For complete levels on the Australian dollar refer to this week’s Scalp Report. The euro was the worst performer of the lot closing virtually unchanged on the session as Greek PSI talks reach an impasse with the single currency paring early advances that saw the EUR/USD top 1.3180 in US trade. The euro now rests just above the 1.31-figure with a break below eyeing subsequent targets at 1.3050.

On the data front, the US docket tomorrow is highlighted by the 4Q GDP print, personal consumption, and the University of Michigan confidence survey. GDP growth is widely expected to accelerate with consensus estimates calling for an annualized print of 3.0%, up from a previous read of 1.8%. Personal consumption is also called higher with expectations eyeing a print of 2.5%, up from 1.7%. The Michigan confidence survey wraps up with the week with estimates calling for the January print to come in at 74.2 from 74.0 a month earlier. Look for dollar losses to taper off heading into the weekend with renewed strength possibly coming into play in early February as seasonality trends dictate.