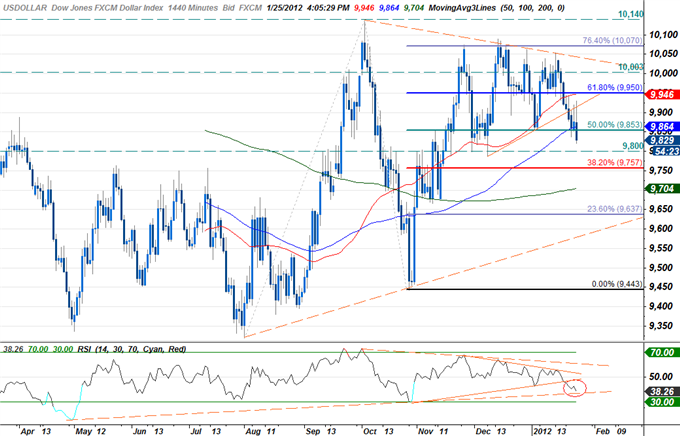 The greenback is markedly weaker at the close of North American trade with the Dow Jones FXCM Dollar Index (Ticker: USDOLLAR) off by 0.55% on the session. The dollar reversed course mid-day on the heels of the FOMC rate decision where the central bank vowed to keep interest rates at record lows through 2014 as unemployment remains stubbornly high and a “depressed” housing sector continues to threaten the recovery. The move represents a significant shift in the central bank’s outlook with the policy statement citing that, “Strains in global financial markets continue to pose significant downside risk to the economic outlook.” The Fed officially set an inflation target of 2% while noting that, “inflation will run at levels at or below those consistent with the Committee’s dual mandate,” over the coming quarters. Equity markets pared early losses with risk currencies advancing at the expense of the greenback. By the close of trade in New York all three major indices were in the black with the Dow, the S&P and the NASDAQ advancing 0.66%, 0.87%, and 1.14% respectively.

The dollar broke below key support at the convergence of the 100DMA and the 50% Fibonacci extension taken from the August 1st and October 27th troughs at 9850 on the back of the FOMC announcement. As noted yesterday, the dollar now risks substantial losses with immediate support targets eyed at 9800. The daily relative strength index continues to head lower after breaking below RSI support dating back to the October 28th lows, with the indicator now eyeing trendline support dating back to the May 2nd low around the 36-mark. 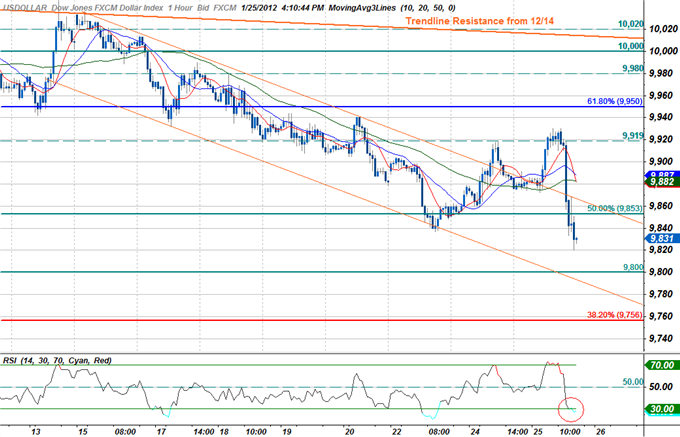 The index briefly broke above trendline resistance of the descending channel formation dating back to the January 15th highs before quickly paring gains to close back within the confines of the formation for the second consecutive day. Interim support for the dollar now rests at 9800 backed by the 38.2% Fibonacci extension at 9756, and 9720. Topside interim resistance holds at the 50% extension at 9850 with subsequent ceilings eyed at 9920, the 61.8% extension at 9950, and 9980. Despite today’s developments we remain cautious on the dollar here as European concerns start to come back into focus with the dollar likely to pair some of the steep losses seen over the past few hours. Still, it’s likely we may continue to trend lower into the close of the month with a break below 9800 eyeing subsequent support targets.

The greenback declined against three of the four component currencies highlighted by a 1.27% decline against the Australian dollar. The high yielder started its advance in overnight trade after core inflation data came in higher than expected- possibly limiting the RBA’s scope to cut interest rates. The second leg up came on the back of the FOMC announcement as high beta assets advanced across the board. For complete levels on the Australian dollar refer to this week’s Scalp Report. The euro and the pound also posted modest advances of 0.61% and 0.29% respectively. The yen was the weakest performer of the lot with a decline of 0.05% against a weaker dollar. Again we note that despite dollar weakness, yen advances are likely to remain tempered as intervention concerns continue to mount.

On the data front, the US docket tomorrow is highlighted by December durable goods, new home sales, initial jobless claims and leading indicators. Consensus estimates call for the headline durable goods orders to print at 2.0%, down from a previous read of 3.8% with new home sales expected to improve slightly by 1.9% m/m, up from 1.6% m/m. Initial jobless claims are expected to rising by 370K, up from a previous print of 352K. Look for broader market sentiment to dictate dollar price action as Asia Pacific markets come online with the greenback remaining at risk at these levels.