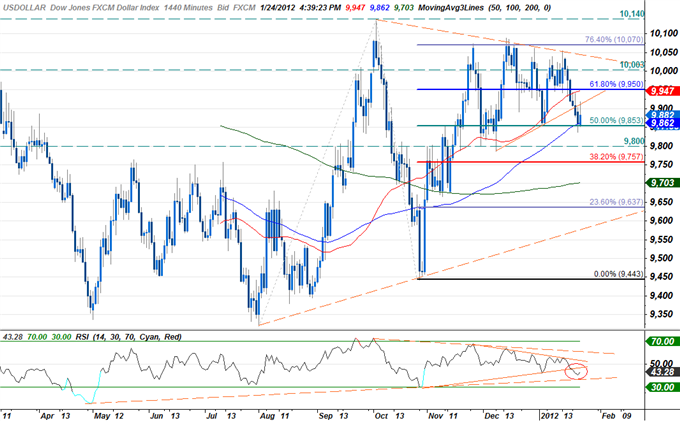 The greenback snapped six consecutive days of losses today with the Dow Jones FXCM Dollar Index (Ticker: USDOLLAR) advancing 0.34% on the session. Equity markets spent the majority of the day paring early losses amid a lackluster trading session with the majors narrowly mixed at the close of North American trade. The Dow and the S&P were off by 0.26% and 0.10% respectively while the NASDAQ managed to eke out a marginal advance of just 0.09%. A stalemate in Greek PSI negotiations weighed on sentiment early in European trade with the decline carrying over into the US session. Traders now look ahead to tomorrow’s FOMC interest rate announcement where voting Fed members will provide individual interest rate forecasts in an attempt to increase transparency to markets.

The dollar rebounded off key Fibonacci support noted yesterday at the 50% Fibonacci extension taken from the August 1st and October 27th troughs at 9850 before encountering resistance at former trendline support dating back to the December 8th lows. This level remains paramount for the greenback with the 100-day moving average resting just above at 9862. The daily relative strength index seems to be reversing course with key RSI support dating back to the October 27th lows sitting lower around the 36-mark. A break below this level risks substantial losses for the dollar with subsequent floors eyed below the 9800-level. 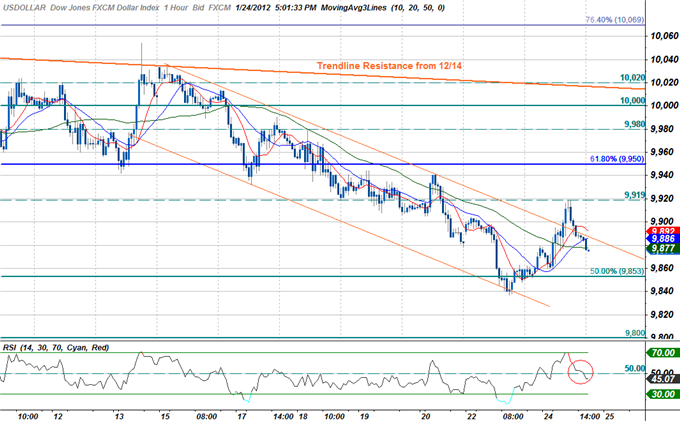 The index briefly broke above trendline resistance of the descending channel formation dating back to the January 15th highs before quickly paring gains to close back within the confines of the formation. Interim support for the dollar rests at 9850 backed by 9800 and the 38.2% Fibonacci extension at 9756. Topside interim resistance holds at 9920 with subsequent ceilings eyed at the 61.8% extension at 9950, 9980, and the psychological 10,000 level. Again we note that the index is likely to hold this range ahead of the FOMC interest rate decision tomorrow as investors await the Fed’s assessment of the economy.

The greenback advanced against two of the four component currencies highlighted by a 0.88% advance against the Japanese yen. Although the Bank of Japan held interest rates at 0.10% as expected, the central bank cut domestic growth projections for 2012 to 2.0% from 2.3% citing concerns over further appreciation in the yen and a slowdown in overseas economies. Officials also made no reference to further easing in monetary policy despite ongoing growth concerns with investors jettisoning the yen which fell against all its major counterparts in North American trade. The Australian dollar also came under attack with a decline of 0.39% as risk appetite subsided. For complete aussie scalp targets refer to today’s Scalp Report where we take a closer look at the broader picture for the high yielder. The British pound was the top performer against the dollar today with an advance of 0.33% on the session. As noted in today’s Winners/Losers report, the pound remained well supported in US trade after stronger than expected public sector net borrowing data fueled optimism that the government’s austerity measures are taking affect.

Tomorrow’s US economic docket sees pending home sales, the house price index and the much anticipated FOMC interest rate decision. The housing market is expected to see further downside pressure with consensus estimates calling for pending home sales to have fallen by 1% m/m in December after a 7.3% increase a month earlier. Despite the data, all eyes will be fixated on the Fed tomorrow and although the central bank is certain to hold rates at 0.25% investors will be eyeing the individual interest rate forecast from the voting members for the first time. The implications for the dollar could be significant if the projections show an overwhelming majority of the board calling for rates to remain low through 2013. In addition to interest rate expectations, recent speculation regarding further quantitative easing have continued to circulate and traders will be closely eyeing the Fed’s accompanying statement for references to additional QE measures. The dollar’s fate over the next 24-hours rests in the hands of Fed officials with tomorrow’s print likely to fuel volatility in the world’s reserve currency.