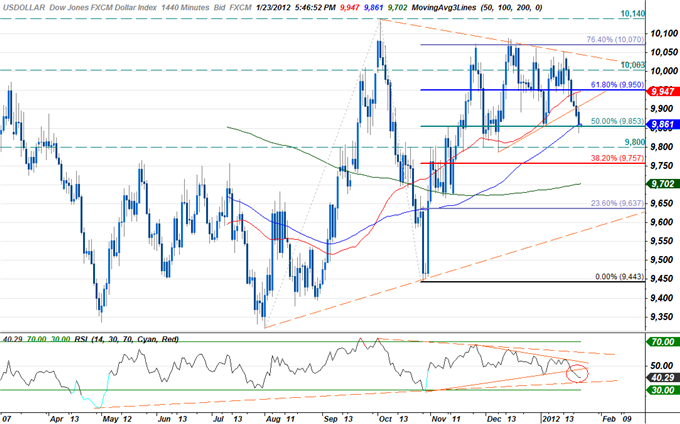 The greenback is softer at the close of North American trade with the Dow Jones FXCM Dollar Index (Ticker: USDOLLAR) off by 0.32% on the session. Markets have continued to rally amid an EU finance ministers meeting in Brussels where officials discussed new budget rules and private sector involvement for Greek debt with initial reports calling for an offer by February 13th. While today’s developments do little to address the underlying solvency issues, markets have remained well supported on hopes that European officials have started to cohesively explore various options to deal with the deepening crisis. US equities were mixed at the close of a lackluster session with the Dow and the NASDAQ off by a mere 0.09%, while the S&P posted a fractional advance of just 0.05%.

The dollar broke below trendline support dating back to the December 8th lows on Friday as the daily relative strength index broke below RSI trendline support. The decline continued today with the reserve currency struggling to hold above key support at the convergence of the 100-day moving average and the 50% Fibonacci extension taken from the August 1st and October 27th troughs at 9850. A break below this level risks substantial losses for the dollar with subsequent floors eyed below the 9800 mark. 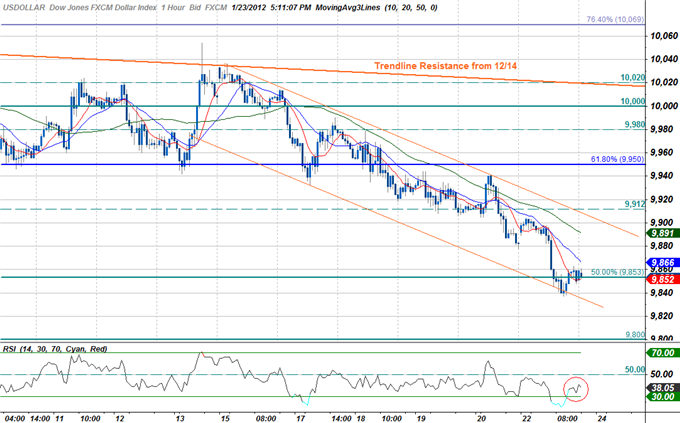 An hourly chart shows the index continuing to trade within the confines of a descending channel formation dating back to January 15th. A break below the 50% Fibonacci extension at 9850 eyes subsequent floors at 9800 and the 38.2% extension at 9756. The dollar is likely to maintain this current range ahead of the FOMC interest rate decision on Wednesday noting that a breach above channel resistance eyes topside targets at 9912, the 61.8% extension at 9950, and 9980.

The greenback fell against three of the four component currencies highlighted by a 0.78% decline against the euro. The single currency has remained well supported since breaching key resistance at 1.2880 last week amid optimism that officials will be able to devise concrete measures to calm market fears of a possible default. The short-covering rally may be short-lived however as newswire reported that EU finance ministers had rejected a Greek PSI offer an hour after the close in New York. The British pound is the weakest performer of the lot with a decline of 0.02% on the session despite broad-based dollar weakness. As noted in today’s Winners/Losers report, the sterling has continued to lag the majors as ongoing concerns regarding domestic growth prospects have continued to undermine the currency.

Tomorrow’s US economic docket remains rather light with only the January Richmond Fed manufacturing index on tap. In the meantime dollar price action will continue to be dictated by broader market sentiment with the greenback likely to remain under pressure ahead of the FOMC rate decision on Wednesday.