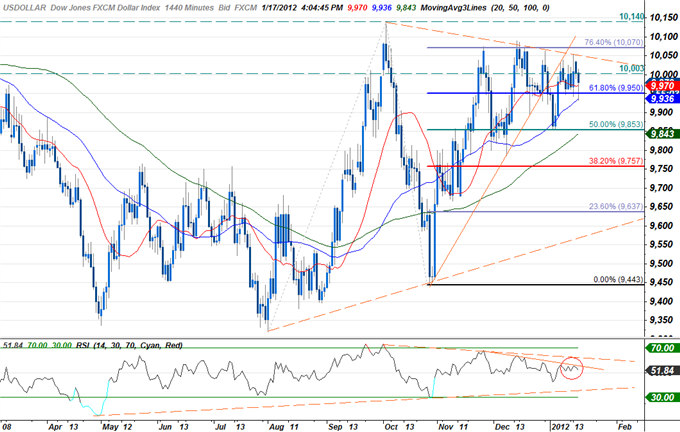 The greenback is softer at the close of North American trade with the Dow Jones FXCM Dollar Index (Ticker: USDOLLAR) off by 0.28% on the session. Stronger than expected data out of China overnight and a successful bond auction in Spain fueled a rally in risk that tapered off in New York as US equities pared a large portion of the day’s advance with the Dow, the S&P, and the NASDAQ advancing 0.48%, 0.36% and 0.64% on the session. Although growth figures out of China were stronger than expected, the data marked the slowest pace of growth in 10 quarters and may increase pressure on Premier Wen Jiaboa to further ease monetary policy. As the global theme of central bank easing carries over into 2012, US prospects have continued to improve with further easing from the Fed unlikely if data continues to top estimates. Accordingly the dollar looks to benefit as investors look to diversify away from risk with recent data reinforcing the reserve currency’s “safe haven,” status.

The dollar saw a test of the key 61.8% Fibonacci extension taken from the August 1st and October 27th troughs at 9950 cited in previous reports. A brief break saw the index rebound off support at the 50-day moving average at 9936 before closing well above the 20-day moving average at 9970. A hold above 9950 remains crucial for the index with a close below this level negating our short-term bullish bias on the greenback. Note that daily relative strength has continued to hold below RSI trendline resistance with a topside break likely to fuel the index with enough momentum for price action to breach above trendline resistance dating back to the October 4th high. 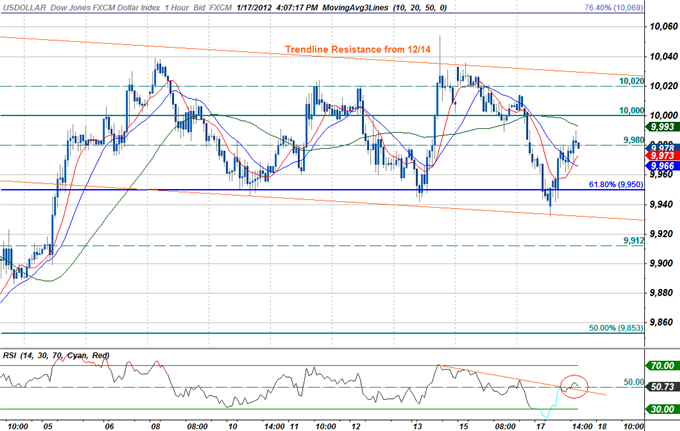 An hourly chart shows the index rebounding off trendline support from earlier in the month before finding solace around the 9800 soft resistance level. Topside resistance now stands at the psychological 10,000 mark with subsequent ceilings seen at 10,020, trendline resistance dating back to December 14th, and the 76.4% Fibonacci extension at 10,070. A breach of this level remains paramount after failing four breach attempts late last year. Support rests with the 61.8% extension at 9950 backed by trendline support, 9912, and the 50% extension at 9850.

The greenback fell against three of the four component currencies highlighted by a 0.53% decline against the Australian dollar. The aussie was the chief beneficiary of risk-on flows today as concerns over Chinese growth prospects temporarily eased and traders chased yields in high beta assets. The AUD/USD trade setup featured in today’s Winners/Losers report remains our trade of choice as the pair continues to track broader market sentiment with precision. As the risk rally tapers off, look for the aussie to continue to pare its recent advance with a break back below 1.0355 aggressively targeting subsequent support targets. The yen was the worst performer of the lot with a loss of 0.05% despite broad-based weakness in the dollar. As we have continued to note, yen advances remain tempered on intervention concerns with the USD/JPY continuing to straddle the 76.80 level. Look for the pair to move higher should risk sentiment turn bearish with dollar advances likely to outpace those of the yen as traders move into lower yielding “safety” assets.

Tomorrow’s US economic docket is highlighted by the December producer price index and industrial production data. Costs for producers are expected to rise by 5.1% y/y, down from a previous print of 5.7% y/y, while industrial production is seen rising by 0.5% after a previous decline of 0.2% in November. As US data continues to improve, the possibility of further quantitative easing from the Fed diminishes with the dollar likely to remain well supported as ongoing concerns regarding the debt crisis in Europe and growth concerns in the Asia Pacific region steer traders into the perceived safety of the reserve currency.