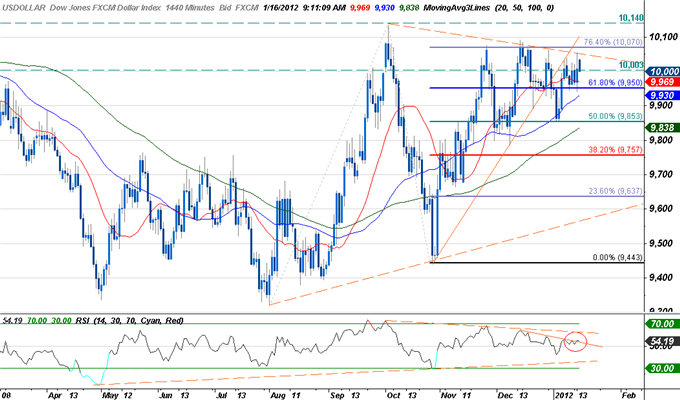 The greenback is softer in late London trade with the Dow Jones FXCM Dollar Index off by just 0.10% on the session. European Equities were mixed ahead of the close after French borrowing costs fell at the nation’s first debt auction since being stripped of its coveted AAA rating by Standard & Poor’s. The rating agency also downgraded eight other EU members on Friday as the region’s debt crisis continues to deepen with the euro coming under considerable pressure late last week. France sold €1.895 billion ($2.4 billion) of one-year paper at a yield of 0.406%, down from the 0.454% seen at the January 9th sale, with investors seemingly shrugging off the downgrade asfunding tensions temporarily eased. The DAX was the top performer an hour ahead of the close with an advance of 0.98%, while the CAC 40 and the FTSE 100 to post marginal gains with the two indices higher by 0.65% and 0.27% respectively. Accordingly the reserve currency drifted lower as a reprieve from the recent bout of risk aversion saw the index pullback from trendline support dating back to the October 4th high.

The dollar continues to hold above the psychological 10,000 level amid quiet holiday trade with US markets closed in observance of Martin Luther King Day. A break below this level eyes key support at the 61.8% Fibonacci extension taken from the August 1st and October 27th troughs at 9950. We remains bullish on the greenback so long as this level is preserved with a daily relative strength index breach above RSI trendline resistance likely fuel the index with enough momentum for a tag of the 76.4% Fibonacci extension at 10,070. 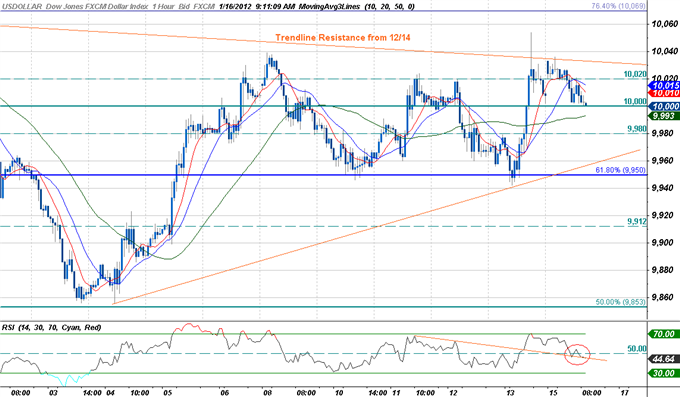 An hourly chart shows the index rebounding off trendline resistance dating back to the December 14th before encountering support at the 10,000 mark. A break below this level sees interim support at 9980, 9950 and 9912, with stronger support seen at the 50% extension at 9850. A breach above trendline resistance eyes crucial targets at the 76.4% extension at 10,070. This levelremains paramount for the dollar after failing four breach attempts late last year, with subsequent ceilings eyed at 10,140 and 10,200.

The greenback was mixed against the component currencies with the euro, the sterling, and the aussie holding rather tight ranges amid thin trading. The yen was the top performer of the lot with an advance of more than 0.32% after moving a full 113.68% of its daily average true range. Despite today’s advance the USD/JPY pair has continued to hold between the 2012 low at 76.60 and the 38.2% Fibonacci extension taken from the November 18th and January 4th troughs at 77.25. Again we note that yen advances are likely to remain tempered as intervention concerns continue cap rallies in the super low-yielder.

Tomorrow’s US economic docket is rather uneventful with only the January Empire manufacturing survey on tap. Consensus estimates call for a print of 10.5, up from a previous read of 9.53 in December. Should the print come in at expectations, the survey would represent the highest read on the report since May and would further support the recent strength in US Data as the recovery regains its footing. The dollar remains poised as it continues to consolidate between critical levels with a move back towards risk aversion preferred to fuel further dollar strength.