US Dollar Closes Lower But Holds Above Key Fibonacci Support 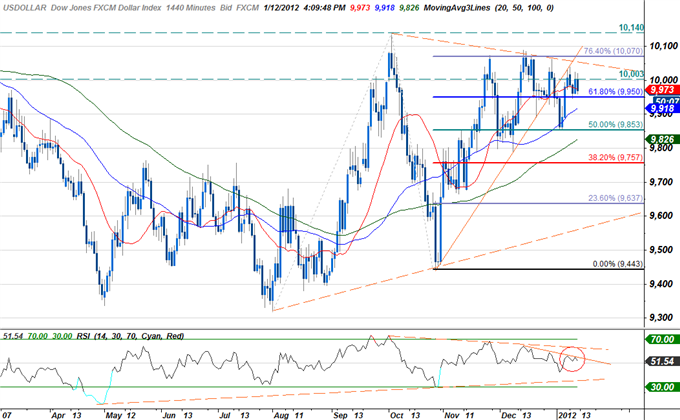 The greenback was softer at the close of North American trade with the Dow Jones FXCM Dollar Index off by 0.38% on the session. Equity markets once again rallied at the close of European trade as the major indices pared early losses to close higher on the day with the Dow, the S&P, and the NASDAQ advancing 0.17%, 0.23%, and 0.51% respectively. The rally in risk came despite weaker than expected US data with advanced retail sales and jobless claims missing consensus estimates as sales grew by just 0.1% in December and weekly claims climbed to 399K from a previous print of 375K. As expected the BoE and the ECB both left rates unchanged at 0.50% and 1.00% respectively, with ECB President Mario Draghi continuing to talk down speculation of further monetary support while placing the burden on governments to put their fiscal houses in order. Markets continued to rally however on successful bond auctions in Spain and Italy with yields on sovereign debt falling as funding tensions temporarily eased. Subsequently the dollar has coming under pressure as traders jettisoned lower yielding assets in favor of risk.

The dollar was unable to hold above the 10,000 level with the index closing just above key support at the 61.8% Fibonacci extension taken from the August 1st and October 27th troughs at 9950. The daily relative strength index looks to rebound off of RSI trendline resistance suggesting the dollar may continue to soften over the next 24-hours. We continue to eye a break above this trendline with such a scenario likely to fuel the dollar with enough momentum to breach the 10,000 mark. 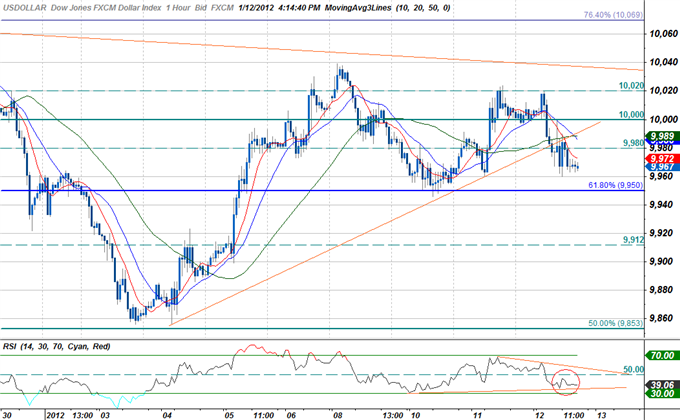 An hourly chart shows the index breaking below short-term trendline support dating back to the January 4th low before finding solace just above the 61.8% extension at 9950. A break here eyes subsequent floors at 9912 and the 50% extension at 9850. Topside resistance holds at the 10,000 mark backed by 10,020, trendline resistance dating back to the December 14th, and the 76.4% extension sat 10,070. This level remains paramount for the dollar after failing four breach attempts late last year.Our bullish bias on the dollar remains intact so long as the index holds above the 9950.

The greenback fell against all four component currencies highlighted by a 0.95% decline against the euro. The single currency advanced today after the ECB left interest rates unchanged with no remarks made about possibly pursuing a zero-interest rate policy similar to that of the Fed. Euro volatility surged with the EUR/USD pair moving a full 126.35% of its daily average true range. The yen was the worst performer of the lot with an advance of just 0.10% on the session. As we have continued to note, yen gains are likely to remain tempered as intervention concerns limit yen advances despite broad-based weakness in the greenback.

Tomorrow’s economic docket is highlighted by the University of Michigan confidence survey with consensus estimates calling for a print of 71.5 for the month of January, up from a previous read of 69.9. The print would be the highest read on the survey since June and could fuel dollar advances as stronger economic data reduces the probability that the Fed will look to implement another round of quantitative easing. Also on tap tomorrow are import prices and trade balance figures, with estimates calling for the US trade deficit to widen to $45.0B from $43.5B. The immediate dollar outlook remains unclear with thin trade ahead of the weekend likely to see the dollar continue to consolidate within its recent range. The index risks further losses next week with a break below the 9950 support level.