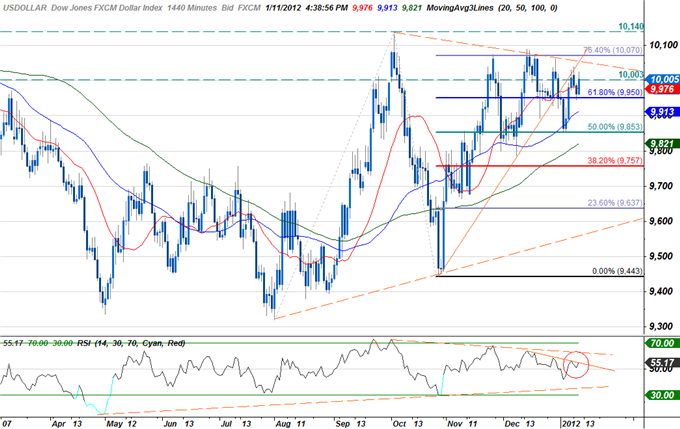 The greenback snapped a two-day losing streak in North American trade with the Dow Jones FXCM Dollar Index advancing 0.39% on the session. Equity markets were sharply off at the open, spending the majority of the day paring early losses with the major indices mixed at the close of trade in New York. The NASDAQ managed to eke out a gain of just 0.31% with the S&P closing virtually flat on the session. The Dow was not able to stay afloat, closing off by a mere 0.10%. The release of the Fed’s Beige Book today offered an upbeat assessment of the twelve Federal Reserve Districts with the report citing that growth was, “modest to moderate” across most of the nation with price pressures remaining “quite limited” as manufacturing maintained its expansion. The statement went on to note that while farming and mining showed “general robust conditions,” wage increases were “modest overall” while permanent hiring remained “limited.” The remarks were more or less in line with recent relevant data and continue to suggest the domestic recovery remains on proper footing. As data continues to improve, look for the dollar to start reacting favorably on positive US headlines as the greenback slowly decouples from its inverse relationship with equities, a phenomena that is likely to become more prominent later this year.

The dollar rebounded off key Fibonacci support at the 61.8% extension taken from the August 1st and October 27th troughs at 9950 as cited in yesterday’s report. The daily relative strength index has reversed course and is now testing RSI resistance taken from the December 14th high. A breach of this level eyes subsequent targets at the secondary RSI resistance level (dashed line) with the index eyeing the 76.4% extension at 10,070. 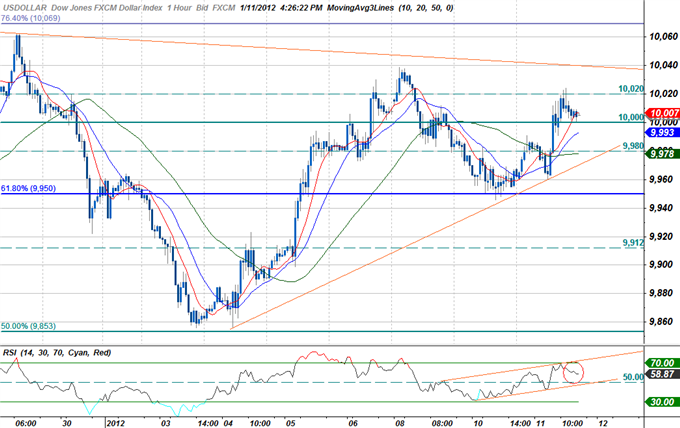 An hourly chart shows the index closing back above the psychological 10,000 level after rebounding off soft resistance at 10,020. A breach here eyes trendline resistance dating back to the December 14th high currently at 10,040, and the 76.4% extension at 10,070. This level remains paramount for the dollar after failing four breach attempts late last year. A break below interim support eyes subsequent floors at 9980, the 61.8% extension at 9950, and 9912. Our bullish bias on the dollar remains intact so long as the index holds above the 9950.

The greenback advanced against all four component currencies highlighted by a 1.05% advance against the British pound. Weaker than expected trade balance data out of the UK slammed the sterling today with the pound falling against all its major counterparts ahead of the BoE interest rate decision tomorrow. Although the central bank is widely expected to hold rates at 0.50%, investors will be looking to see if the MPC cites any increase in the £275B asset purchase program as conditions in Europe deteriorate and domestic growth remains stubbornly sluggish. The top performer of the lot was the Australian dollar which fell just 0.06% on the session. As we have seen over the past couple of days, the close of European trade has triggered a rally in risk with equities advancing into the close. Accordingly the aussie pared much of the decline seen earlier in the session with the AUD/USD pair closing just above the 1.03-figure. For detailed scalp levels on the aussie refer to yesterday’s scalp report.

Tomorrow economic docket is highlighted by the advanced retail sales report with consensus estimates calling for the pace of sales growth to hold at 0.20% for the month of December. November Business inventories are out soon after with expectations calling for a print of 0.40%, down from a previous read of 0.80%. Despite the nature of the data, the ECB and BoE rate decisions present the highest level of event risk for the day as all eyes turn back on Europe. Traders will be lending keen ear to remarks made by central bank president Mario Draghi with speculation that the ECB will look to adopt the Feds zero interest rate policy continuing to take root after the ECB revealed a balance sheet of over €2 trillion. Look for the dollar to benefit should president Draghi cite an increasingly dovish tone, with the euro risking substantial losses if officials unanimously agree to move more aggressively on rates in an attempt to ease conditions and skirt a so called “mild recession” in the region.