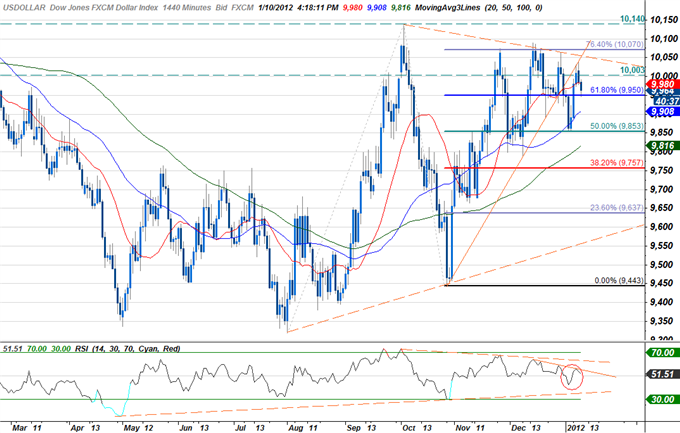 The greenback declined for a second consecutive day in North American trade with the Dow Jones FXCM Dollar Index (Ticker: USDollar) sliding 0.17% on the session. Equity markets extended their gains today after rating agency Fitch cited no plans to downgrade France’s credit rating this year and better than expected economic data eased concerns regarding the Euro zone’s second largest economy. The advance in stocks carried over from a strong performance in Europe, with the Dow, the S&P, and the NASDAQ climbing 0.56%, 0.89%, and 0.97% respectively. The dollar managed to hold its ground however, with the index poised for a reversal.

The dollar continues to hold above the key 61.8% Fibonacci extension taken from the August 1st and October 27th troughs at 9950 noted in yesterday’s report. A hold here remains paramount for the reserve currency with a daily close below seeing no strong support until the 50-day moving average, currently at 9908. We look for the dollar to begin reversing its course later in the week as the daily relative strength index flattens its slope, with a topside break of RSI resistance likely to see the dollar move back above the 10,000 level. 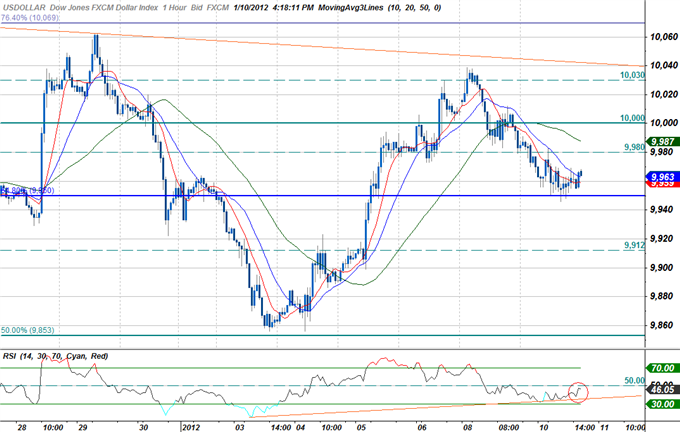 An hourly chart shows the index finding support along the 61.8% extension at 9950 before pulling away just ahead of the close. An intra-day break below this level risks significant losses for the reserve currency with subsequent support targets seen at 9912 and the 50% Fibonacci extension at 9850. Topside resistance is now eyed at the 9980 level backed by 10,000 and 10,030. Crucial resistance holds at the 76.4% extension at 10,070 and remains paramount for the dollar after failing four breach attempts late last year.

The greenback fell against three of the four component currencies highlighted by a 0.67% decline against the Australian dollar. The high yielders continued to outperform today on improved market sentiment with the dollar declining against all its major counterparts save the yen which closed flat on the session. However the recent pullback in the dollar is likely to be short lived as traders now look to Thursday’s ECB rate decision for an update on conditions in Europe. All told, the component currencies continued to hold tight ranges, with the recent advance in the aussie offering improved positioning for further dollar advances. For a detailed update of our current aussie setup, refer to today’s scalp report.

Tomorrow’s economic docket is highlighted by the Fed Beige Book where investors will be closely eyeing reports from the twelve Federal Reserve Districts. Expectations are for the report to cite moderately improving conditions as US economic data continues to top expectations. As such, the report could further support the equity rally as US stocks begin a slow decoupling from events unfolding in Europe with the dollar likely to begin reacting favorably to strong US data later this year. In the meantime look for the greenback to pare some of the losses seen over the last two sessions as investors seek to haven ahead of the ECB rate decision on Thursday.