Current US Dollar Correction Offers Chance to Get Long 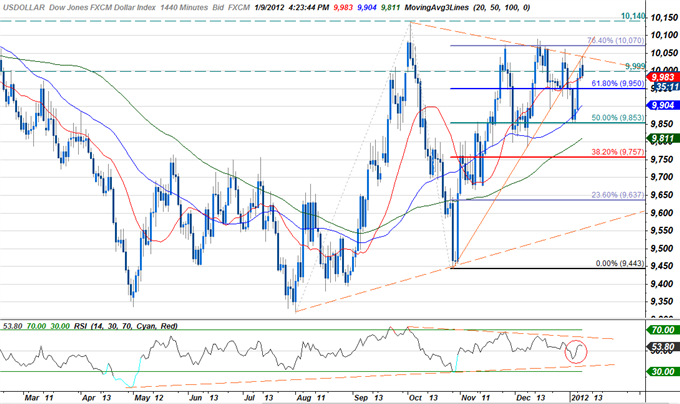 The greenback was softer at the close of North American trade with the Dow Jones FXCM Dollar Index (Ticker: USDollar) sliding 0.25% on the session. Equity markets spent the bulk of the session paring early losses with the rally gathering pace soon after the close of European trade. The major indices eked out a marginal gain ahead of the fourth quarter earnings season which kicks off today, with the Dow, the S&P, and the NASDAQ advancing 0.27%, 0.23%, and 0.09% respectively. The dollar remains on shaky ground early in the week as higher yielding assets continued to advance in afternoon trade.

The dollar closed back below the 10,000 level after encountering resistance at former trendline support, currently at 10,040. Crucial resistance continues to hold at the 76.4% Fibonacci extension taken from the August 1st and October 27th troughs at 10,070. The index closed just above interim support at the 20-day moving average with a break here eyeing floors at the 61.8% extension at 9950. As we noted in Friday’s report, it’s likely the dollar will continue to soften early this week after last week’s substantial three day rally with a reversal in the slope of the daily RSI suggesting the dollar could see further losses over the next 24-hours. 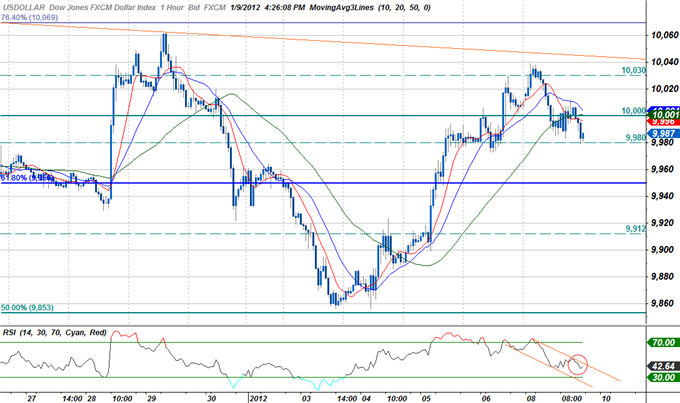 An hourly chart shows the index rebounding off the 10,030 level before encountering soft support at 9980 in afternoon trade. Subsequent floors for the index are eyed at the 61.8% extension at 9950, 9912, and the 50% extension at 9850. Topside resistance now holds at 10,000 with a breach eyeing topside targets at 10,040, and the key 76.4% extension at 10,070. This level remains paramount for the dollar after failing four breach attempts late last year

The greenback fell against all four component currencies highlighted by a 0.45% decline against the euro. The single currency has received a respite from the heavy selling pressure seen last week as German Chancellor Angela Merkel and French President Nicolas Sarkozy outlined further steps to hasten the response to the deepening crisis. Traders continue to eye bond yields in the periphery nations with yields on Spanish and Portuguese 10-year paper softening today while the Italian 10-year climbed three basis points to 7.16%. The Australian dollar was the worst performer of the lot with an advance of just 0.16% on the session. A flat print on November retail sales data overnight continued to weigh on the aussie as interest rate expectations for further cuts from the RBA continue to take root. Although the high yielder may find some support on a rebound in broader market sentiment, our medium-term bias remains weighted to the downside. For detailed scalp targets on the AUD/USD pair, refer to Thursday’s Scalp report.

Economic data out of the US is extremely light tomorrow with only the IBD/TIPP economic optimism survey and November wholesale inventories on tap. Consensus expectations call for inventories to print at 0.50%, down from a previous read of 1.60%. In the meantime, the dollar will continue to take cues from shifts in risk appetite with headline risk out of Europe peaking on Thursday with the European Central Bank interest rate decision. With the ECB’s balance sheet topping €2 trillion, it is conceivable that the central bank could look to follow the Fed and implement a zero-interest rate policy in order to ease conditions among the region’s most indebted nations. Should the governing council decide to cut rates more aggressively, the euro is likely to maintain its downward trajectory with medium-term targets held at 1.2550 and the 1.25-figure.