Risk On = Dollar Down, Right? So What Happened with NFPs? 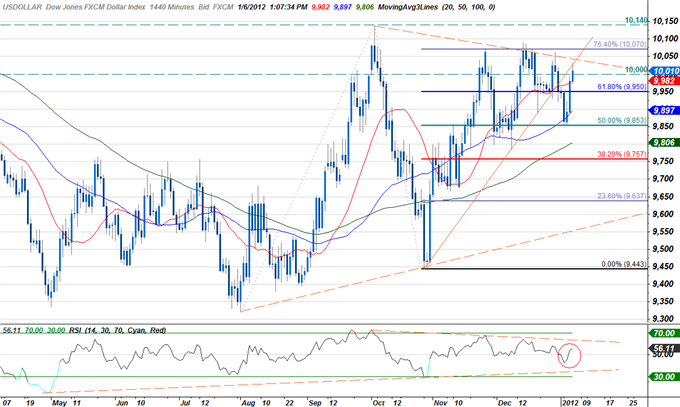 The greenback is firmer ahead of the close of North American trade with the Dow Jones FXCM Dollar Index (Ticker: USDollar) advancing 0.29% on the session. While today’s strong NFP print saw equities pare some of the early losses, the advance was short lived with stocks retreating once again in afternoon trade. Non-farm payrolls climbed by 200K, besting calls for a print of just 155K with the unemployment rate unexpectedly doping to 8.5% from 8.6%. While US data continues to improve, concerns regarding the deteriorating conditions in Europe have continued to weigh on broader market sentiment with European equities closing lower on the day. Various times throughout the week I’ve noted that we expect to see the inverse dollar/equity correlation breakdown this year with the dollar acting favorably to positive US data flow. Today we saw a hint of this decoupling as the dollar surged across the board on the stronger-than-expected employment data while equities moved higher. While the correlation still holds as of now, look for this to become more prominent later in the year as stronger US data decreases the likelihood of further quantitative easing and increases the likelihood the Fed will begin normalizing monetary policy.

The dollar breached the 10,000 level noted in yesterday’s report before encountering resistance at former trendline support, currently at 10,030. The index now eyes key resistance at the 76.4% Fibonacci extension taken from the August 1st and October 27th troughs at 10,070. While we expect a test of this level sometime this month, the greenback is likely to pare some of this week’s gains after three consecutive days of advances. The RSI reversal noted earlier this week has continued to support our bias with the oscillator crossing back above the 50-level as the slope steepens further. 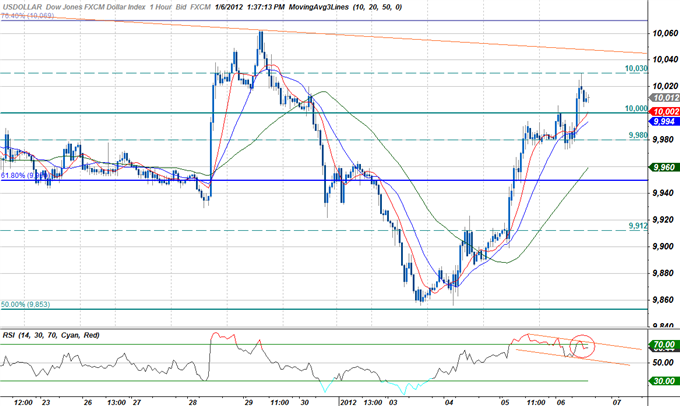 A slight adjustment to our soft resistance targets show the index rebounding off the 10,030 mark just ahead of the European close. Interim support now rests at the 10,000 level, backed by soft support at 9980, the 61.8% Fibonacci extension at 9950, and 9912. A breach of topside resistance eyes subsequent ceilings at trendline resistance dating back to the December 14th high and the 76.4 extension at 10,070. This level remains paramount for the dollar after failing four breach attempts late last year

The greenback advanced against three of the four component currencies highlighted by a 0.52% advance against the euro which reached its lowest levels since September 2010. As officials struggle to ease market jitters over the deepening debt crisis, investors have continued to turn on the single currency with the euro off by more than 1.8% in the first week of 2012. Longer-term prospects for the euro remain weighted to the downside noting that a pullback of some magnitude is likely before continuing lower. The top performer of the lot was the yen which continues to hold its ground as the low yielder continues to benefit from risk-off flows. The USD/JPY remains well supported at these levels with any advances in the yen likely to be tempered by ongoing intervention concerns.

Year to date the greenback has outperformed all the component currencies save the aussie which has gained 0.20% this week. Notwithstanding developments out of Europe, look for the dollar to pullback early next week before mounting an offensive that should see the index top the 10,070 key resistance level later this month.