US Dollar Advances Amid Lackluster Performance in Equities 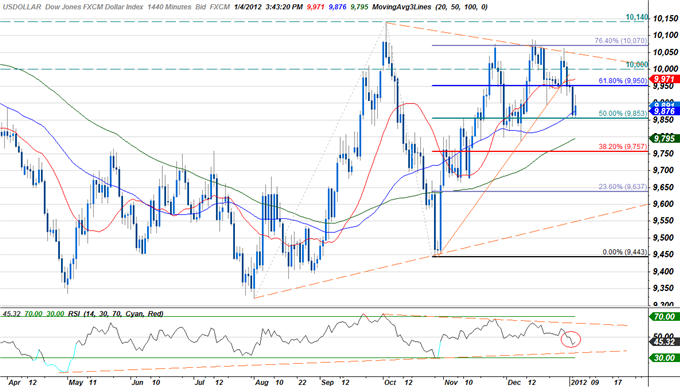 The greenback is firmer ahead at the close of North American trade with the Dow Jones FXCM Dollar Index (Ticker: USDollar) advancing 0.31% on the session. Equity markets pared early losses but teetered in and out of positive e territory throughout the day with the Dow, the S&P, and the NASDAQ squeezing out marginal gains of 0.17%, 0.02%, and 0.01% respectively. With key employment data on tap for Friday, traders will be closely eyeing tomorrow’s ADP employment report as US economic data continues to improve. The greenback remains at risk however as traders continue to seek out higher yielding assets with treasuries coming under pressure for a second consecutive day while stocks advanced.

The dollar was able to hold above the key support level noted in yesterday’s USD Trading Report at the 50% Fibonacci extension taken from the August 1st and October 27th troughs at 9850. This level remains paramount for the greenback with a break below risking substantial losses. Daily relative strength looks to reverse, with a break back above the 50-level offering support for further gains in the reserve currency. 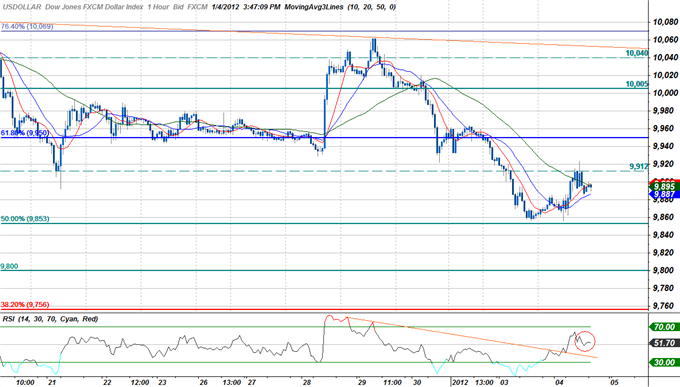 An hourly chart shows the index rebounding just ahead of the 50% extension before failing to hold above 9900. We have slightly adjusted our soft resistance target to reflect more recent price action with interim resistance now standing at 9912 followed by the 61.8% extension at 9950 and the 10,000-level. Support holds at 9850 with subsequent floors seen lower at 9800 and the 38.2% extension at 9756.

The greenback advanced against three of the four component currencies highlighted by a 0.86% advance against the euro which moved more than 147% of its daily average true range. The single currency remains at risk as conditions in Europe continue to deteriorate with the euro more than 130pips off the overnight highs at 1.3070. The yen was the top performer of the lot with a fractional advance of just 0.06% as the USD/JPY continues to hold within an extremely tight range between 76.60 and 76.80. Intervention concerns are likely to keep yen advances tempered with an extreme shift into risk aversion likely to see dollar gains outpace those of the yen.

Tomorrow’s economic calendar is highlighted by the December ADP employment report with consensus estimates calling for the addition of 175K private sector jobs, slightly weaker than the 206K print seen in November. The ISM non-manufacturing composite is also on tap with estimates calling for a print of 53.0, up from a previous read of 52.0. As domestic data continues to improve, traders will be putting more emphasis on the Fed’s language after yesterday’s minutes revealed that the committee now looks to release individual forecasts on interest rates in an effort to provide further transparency to markets. Look for the dollar to remain docile as we head into Friday’s key non-farm payroll report, with the index likely to hold its current range.