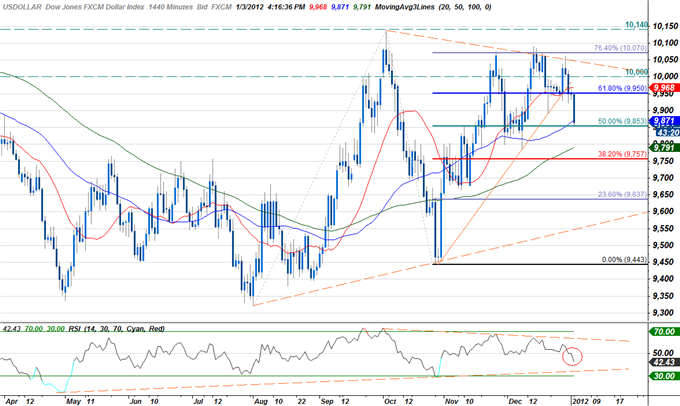 The greenback was markedly lower at the close of North American trade with the Dow Jones FXCM Dollar Index (Ticker: USDollar) off by more than 0.90% on the session. Equity markets kicked off 2012 with a substantial rally in risk assets as stocks and higher yielding currencies advanced across the board, putting pressure on the reserve currency. Stronger than expected economic data out of the US further fueled the rally after the December ISM manufacturing report posted its 29th consecutive month of growth in the sector. The major indices closed sharply higher, albeit off session highs, with the Dow, the S&P, and the NASDAQ advancing 1.47%, 1.55%, and 1.67% respectively.

The dollar broke below the 61.8% Fibonacci extension taken from the August 1st and October 27th troughs at 9950 before finding solace just above the 50% extension at 9850. As noted in previous reports posted last year, this level remains paramount for the greenback with a break below likely to shift our medium-term bias. Note that the daily relative strength index broke below the 50-level today with a move below RSI support at 35 likely to see substantial losses for the reserve currency in the interim. 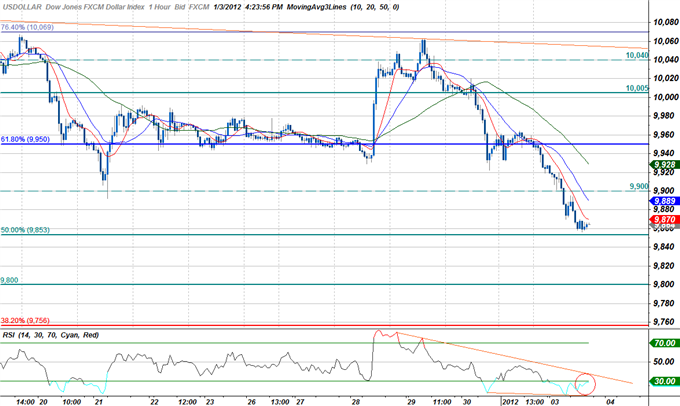 An hourly chart shows the magnitude of today’s dollar sell-off with price action closing just above the 50% extension at 9850. Subsequent support targets are seen at 9800 and the 38.2% extension at 9756. Interim resistance now stands at 9900 backed by 9950 and 10,000. Crucial resistance holds at the 76.4% extension at 10,070 where the index has already failed three attempts at a breach. This level remains key for further longer-term dollar advances.

The greenback fell against all four component currencies highlighted by a 1.34% decline against the Australian dollar. As risk sentiment continues to improve look for higher yielding currencies to outperform the dollar as traders jettison lower yielding “haven” assets. The aussie continues to be the chief beneficiary of risk-on flows as traders go back on the hunt for yields. The worst performer of the lot was the Japanese yen which advanced just 0.32% despite broad based dollar losses. As cited multiple times last year, concerns over further currency interventions from the Bank of Japan or the Japanese Finance Ministry are likely to temper yen advances as investors remain reluctant to move too heavily into the low yielder.

Tomorrow’s economic calendar is highlighted by November factory orders with consensus estimates calling for orders to rise by 1.9%, up from a previous decline of 0.4%. As US data continues to improve and concerns regarding a European slow down taking root, look for the inverse relationship between the dollar and US equities to begin to decouple later this year. That said, the greenback should remain well supported so long as prices action holds above the 9850 mark.