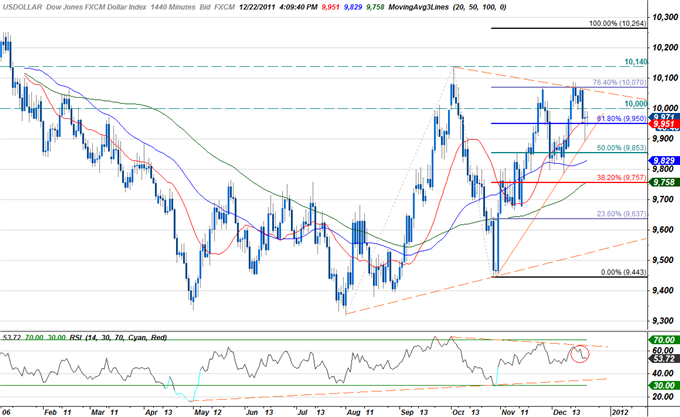 The greenback is fractionally weaker at the close of North American trade with the Dow Jones FXCM Dollar Index (Ticker: USDollar) off by a mere 0.06% on the session. Despite a strong rally in Europe, US equities posted modest advances amid low holiday volume with the Dow, the S&P, and the NASDAQ climbing 0.51%, 0.83%, and 0.83% respectively. A weaker than expected 3Q GDP print in pre-market trade was balance by stronger than expected print on weekly jobless claims, the University of Michigan confidence survey, and November leading indicators. The ensuring range bound price action was lackluster and markets are likely to see further consolidation over the coming days as 2011 trade comes to an end.

The dollar was held in a tight range today with the index moving just 56.14% of its daily ATR. The greenback has now posted back to back long-legged doji’s as markets continue to lack conviction and volume diminishes ahead of the holiday weekend. The dollar continues to hold above the key 61.8% Fibonacci extension taken from the August 1st and October 27th troughs at 9950. The daily relative strength index looks to be flattening out with a topside break above RSI resistance needed to see the dollar gain enough momentum to breach the 76.4% extension at 10,070. 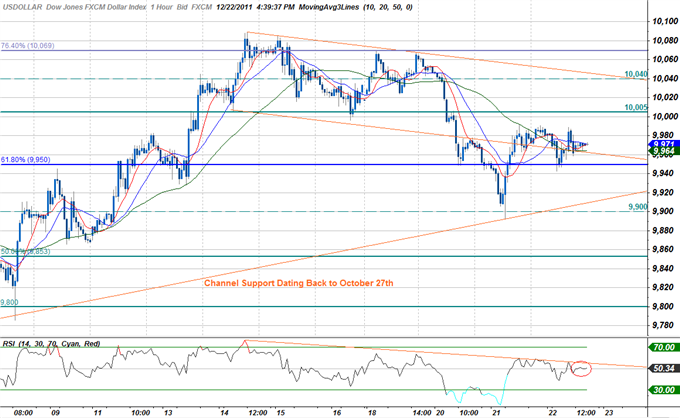 An hourly chart shows the index closing back within the confines of the short-term channel formation dating back to the December 14th high. Interim resistance stands at the 10,000 mark with a breach here eyeing topside targets at 10,040 and the 76.4% Fibonacci extension at 10,070.So long as the index holds above the 50% extension at 9853 our medium-term bias remains weighted to the topside as traders seek refuge in the perceived safety of the reserve currency amid ongoing concerns over the European debt crisis and stronger US data.

The greenback advanced against two of the four component currencies highlighted by a 0.15% advance against the yen which held the smallest range among the majors. The Australian dollar was the top performer with an advance of 0.27% against the greenback as markets continued to rally late into the session with the high yielders outpacing the reserve currency. Still, these moves continue to lack conviction with as liquidity thins ahead of the weekend.

Tomorrow’s economic calendar is highlighted by the November durable goods orders, personal income & spending, and new homes sales. Consensus estimates call for durable goods to have improved by 2.2% last month, up from a previous decline of 0.7%, with personal spending seen rising by 0.3% from 0.1% a month earlier. The pace of personal income growth is widely expected to have eased slightly to 0.3% from a previous read of 0.4% in October. Investors will be closely eyeing new home sales data after reports earlier in the week showed housing starts and existing home sales grew by 9.3% m/m and 4.0% m/m, both far surpassing expectations. A stronger print on tomorrow’s new home sales could further fuel the recent rally as the recovery in the housing sector continues to take root. Look for the dollar to start to react favorably to positive US data in the weeks ahead as investors seek to protect their assets as we head into the New Year.