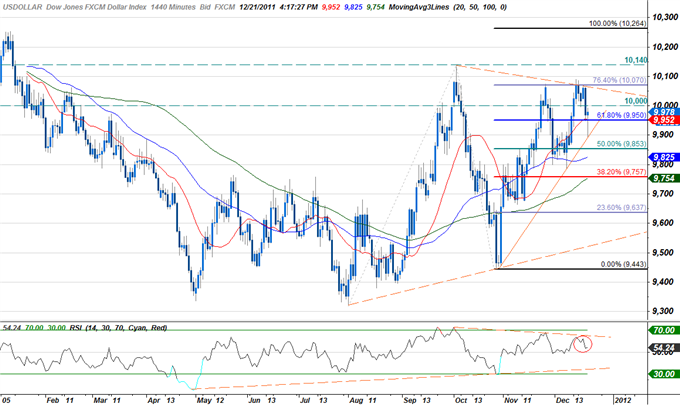 The greenback was marginally higher at the close of North American trade with the Dow Jones FXCM Dollar Index (Ticker: USDollar) squeezing out a fractional advance of just 0.06% on the session. Euphoria from the ECB’s Long-Term Refinancing Operations or LTRO was short lived in early US trade as markets pared early gains on extremely low volume to trade in negative territory for the majority of the session before a late day rally saw Dow the S&P close higher by 0.3% and 0.19% respectively. The NASDAQ was unable to recoup losses with the index off by nearly 1% at the close. The ECB’s move to offer three-year loans to banks at an interest rate of just 1% temporarily eased liquidity concerns after the LTRO saw much stronger demand than expected with 523 banks borrowing a staggering &euro;489 billion, dwarfing consensus estimates for €310 billion in loans from the central bank. However speculation regarding whether or not banks would use the funding in a synthetic carry trade to buy sovereign debt at higher yields continues to weigh on market sentiment. The mere fact that more than 500 banks requested funding suggests that the situation in Euro region may be worse than expected and that banks may see further significant risks as we head into 2012. Treasury yields on periphery sovereign debt also continued to climb despite the central bank’s lending facility with yields on Italian and Spanish 10-year paper toping 6.7% and 5.2% respectively.

The dollar managed to pare early losses after rebounding off trendline support dating back to the October lows to close above the key 61.8% Fibonacci extension taken from the August 1st and October 27th troughs at 9950. Key daily support continues to hold at the 50% extension at 9853 backed closely by the 50-day moving average at 9825. The daily relative strength index looks to be reversing to the topside with a break above RSI resistance likely to see the dollar gain enough momentum to breach the 76.4% extension at 10,070. 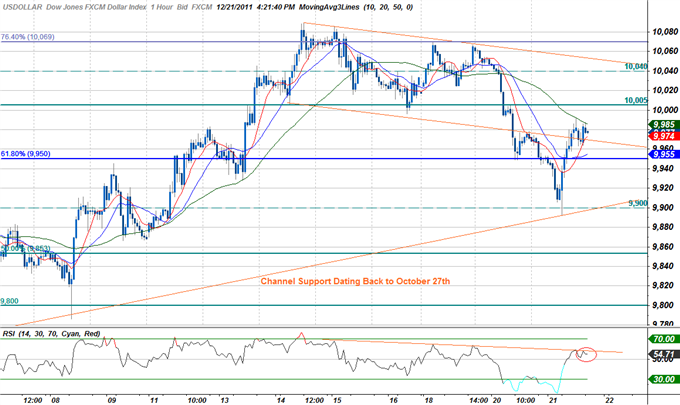 An hourly chart shows the index breaking below short-term channel support in overnight trade before closing back within the confines of the channel formation dating back to the December 14th high. Interim resistance stands at the 10,000 mark with a breach here eyeing topside targets at 10,040 and the 76.4% Fibonacci extension at 10,070.So long as the index holds above the 50% extension at 9853 our medium-term bias remains weighted to the topside as traders seek refuge in the perceived safety of the reserve currency amid ongoing concerns over the European debt crisis and stronger US data.

The greenback advanced against two of the four component currencies highlighted by a 0.27% against the euro which moved a full 117.54% of its daily ATR. Debt concerns continue to plague the region despite the ECB’s new record breaking liquidity measures as investors remain reluctant to move into the single currency. The yen was also heavy against the greenback today as dollar advances put pressure on the low yielder which fell 0.26% on the session. The aussie and the sterling were the top performers of the lot with modest advances of 0.13% and 0.09% respectively.

Tomorrow’s economic calendar is highlighted by the 3Q annualized GDP, personal consumption, and the University of Michigan confidence survey. Both the 3Q GDP revision and the GDP price index is expected to hold at 2.0% and 2.5% respectively with the personal and core consumption also seen holding at 2.3% and 2.0% respectively. Consensus estimates call for the University of Michigan confidence survey to top last month’s read with a print of 68, up from 67.7, with leading indicators expected to weaken for 0.3% from 0.9%. If the data continues to improve, look for the dollar to remain well supported as domestic prospects improve and European concerns persist. However as liquidity dries up ahead of the holiday break, the possibility for a risk rally of some magnitude continues to threaten the reserve currency as we head into the close of the week.