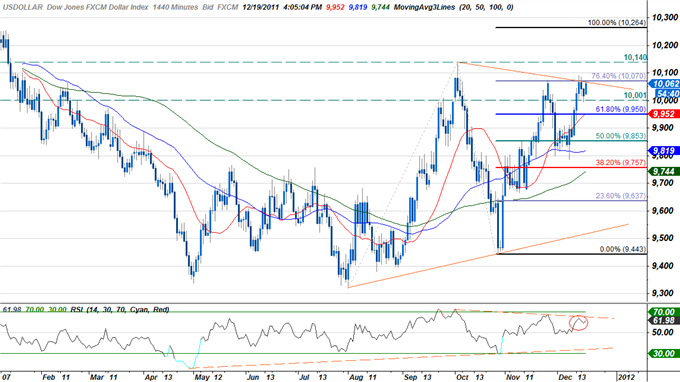 The greenback was markedly higher are at the close of North American trade with the Dow Jones FXCM Dollar Index (Ticker: USDollar) higher by 0.39% on the session. The all-too-familiar pattern of a strong open followed by a dramatic sell-off has carried over this week with all three major stock indices closing sharply lower as Financials fell across the board on concerns that Basel III capital requirements may weigh heavily ailed banking sector. Adding fuel to the fire were remarks made by ECB President Mario Draghi who reaffirmed that the central bank will not act as the lender of last resort to indebted sovereigns, but would step in to shore up the banking sector if needed. Draghi went on to note that although the ECB would not step in to purchase bonds, banks would be free to use ECB loads to buy sovereign debt. The statement made headlines as the president seemingly shrugged off the notion of further bond purchases, putting more pressure on governments to put their fiscal houses in order. The remarks come as EU leaders decided to lend &euro;150 billion to the IMF to stabilize the region, missing the €200 billion agreed upon at the December 9th EU summit in Brussels. The result was a broad based sell-off in risk assets with the dollar and US Treasuries advancing as equities fell with the Dow, the S&P, and the NASDAQ declining by 0.84%, 1.17%, and 1.26% respectively.

The dollar continues to hold above the 10,000 level with the index testing the convergence of key trendline resistance and the 76.4% Fibonacci extension taken from the August 1st and October 27th troughs at 10,070 late in the session. This level remains paramount for the greenback with a topside break eyeing the October 4th high at 10,140. The daily relative strength index looks to be reversing to the topside a break above RSI resistance likely to see the dollar gain enough momentum to breach the 10,070 mark. 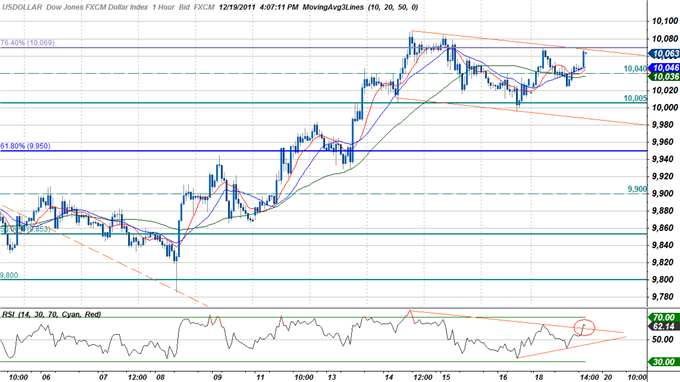 An hourly chart shows the index continuing to trade within the confines of a descending channel formation dating back to the December 14th highs. Again here we highlight the convergence of short-term channel resistance and the 76.4% extension at 10,070. A break below 10,000 risks substantial losses for the greenback with downside targets eyed at the 61.8% extension at 9950, 9900, and the 50% extension at 9855. So long as the index holds above this level, our medium-term bias remains weighted to the topside as traders seek refuge in the perceived safety of the reserve currency amid ongoing concerns over the European debt crisis.

The greenback advanced against all four component currencies highlighted by a 0.93% advance against the Australian dollar. As noted in today’s winners/losers report, investors continue to jettison higher yielding assets as risk sentiment diminishes, with the aussie taking the brunt of today’s move into risk aversion. We continue to favor downside plays in the aussie as the crisis in Europe deepens and traders look to diversify away from commodity and growth backed assets. The euro and the pound saw similar performances with declines of 0.40% and 0.32% respectively while the yen was the best performer with a loss of 0.31%. The yen continues to lag dollar advances on risk-off days as intervention concerns temper yen gains. Accordingly we look for the USD/JPY pair to remain well supported with a risk-on environment likely to see the pair move lower as dollar losses outpace those of the yen.

Tomorrow’s economic calendar is highlighted by the November housing starts and building permits. Consensus estimates call for housing starts to improve by 0.3% m/m, up from a previous decline of 0.3% m/m, while building permits are expected to slide by 1.4% from a previous print of 10.9%. As the Fed continues to carry out “operation twist” traders will be looking for some relief in the housing market as concerns over the health of the sector continue to loom. Look for a positive read to further support the dollar with our medium-term bias still weighted to the topside.