US Dollar Drifts Lower- Index Holds Above Key Support at 10,000 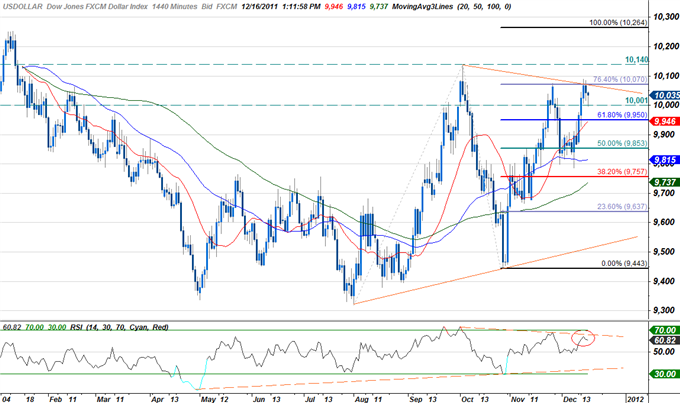 The greenback was modestly weaker two hours ahead of the close in New York with the Dow Jones FXCM Dollar Index (Ticker: USDollar) off by 0.11% on the session. Equity markets rallied early in the session after the Italian Lower House approved new austerity measures and Euro group president Jean-Claude Junker cited that officials are likely to meet an informal December 19th deadline to arrange loans to the International Monetary Fund as a part of a comprehensive plan to battle the region’s deepening debt crisis. The rally quickly faded however as the major indices pared gains with the Dow off by 0.12% while the S&P and the NASDAQ managed to stay in the black with a marginal advance of 0.29% and 0.58% respectively at 1:30pm ET. Fueling the decline off session highs were headlines out of rating agency Fitch which warned of impending downgrades to Belgium, Spain, Slovenia, Italy, Ireland, and Cyprus. The news saw risk appetite quickly reverse with the dollar rebounding off session lows.

The dollar continues to hold above the 10,000 level after attempting a topside break at the convergence of trendline resistance and the 76.4% Fibonacci extension taken from the August 1st and October 27th troughs at 10,070.The daily relative strength index looks to be flattening out with a break above RSI resistance likely to see the dollar gain enough momentum to breach the 10,070 mark. Such a scenario would eye resistance targets at the October highs at 10,140. 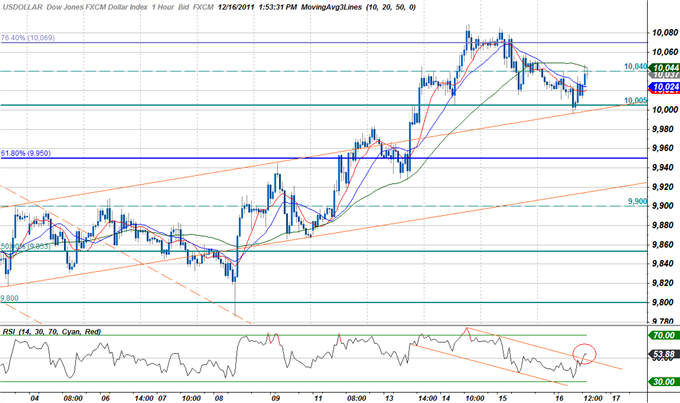 An hourly chart shows the index rebounding off the 10,000 level to trade just below interim resistance at 10,040. A break below 10,000 eyes downside targets at the 61.8% extension at 9950, 9900, and the 50% extension at 9855. So long as the index holds above this level, our medium-term bias remains weighted to the topside as traders seek refuge in the perceived safety of the reserve currency amid ongoing concerns over the European debt crisis.

The greenback posted marginal advances against two of the four component currencies, highlighted by a 0.12% advance against the British Pound and a 0.04% advance against the euro as both currencies succumb to the news out of Fitch. The Australian dollar is the top performer of the lot with and advance of 0.37% on the session. Despite the advance, the aussie looks to close the week lower by nearly 2.6% against the greenback as the high yielder continues to track broader market sentiment. The yen is also modestly firmer on the day as risk-on flows early in the session saw dollar losses outpace those of the yen. As we have continued to cite, look for the USD/JPY pair to remain fairly static as intervention concerns continue to temper gains in the yen.

There is no economic data on tap for the US until Tuesday when the US Commerce Department’s Bureau of the Census releases November housing starts and building permits. Until then traders will remain on “rating watch” as the debt crisis in Europe continues to deepen and ongoing concerns over global growth continue to take root. The dollar is likely to remain well supported heading into the weekend with trade next week likely to quiet down ahead of the Christmas holiday.

To be added to Michael's email distribution list, send an email with subject line "Distribution List" to mboutros@dailyfx.com