US Dollar Consolidation Underway- Weakness to be Short-Lived 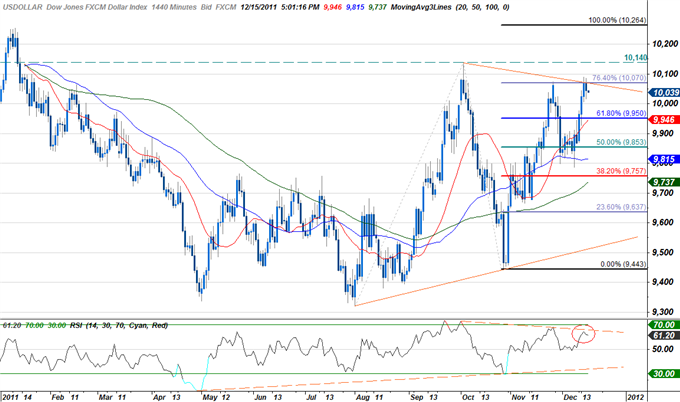 The greenback snapped three days of advances today with the Dow Jones FXCM Dollar Index (Ticker: USDollar) closing off by 0.19% on the session. Stronger-than-expected US economic data and a well subscribed Spanish bond auction fueled a rally in risk that carried over into North American trade. Equity markets spend the majority of the session drifting lower however as the rally quickly lost steam, suggesting investors are remaining cautious as the European crisis and concerns of a slowdown in China threaten global growth prospects. The Dow, the S&P, and the NASDAQ closed modestly higher on the session with an advance of 0.38%, 0.32%, and 0.07% respectively.

As noted in yesterday’s USD Trading report, the dollar remains in consolidation after testing key resistance at the 76.4% Fibonacci extension taken form the August 1st and October 27th troughs at 10,070. Strong resistance holds here with a topside break exposing targets at the October highs at 10,140. Daily support rests at the 61.8% extension at 9950. As expected, the relative strength index did rebound off RSI resistance with a topside break likely to see the dollar gain enough momentum to breach the 10,070 mark with such a scenario eyeing resistance targets at the October highs at 10,140. 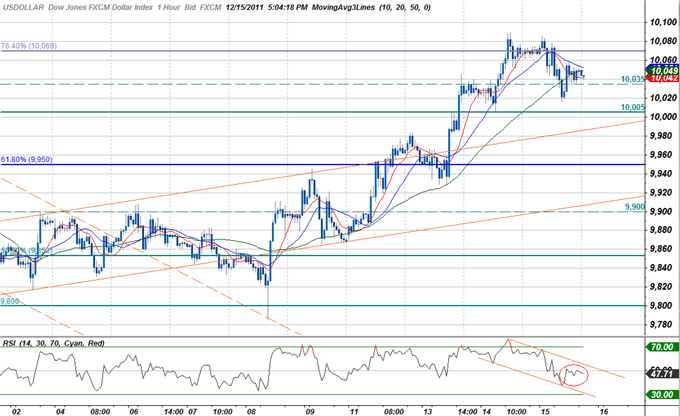 An hourly chart shows the index failing to hold above the 76.4% extension with a break back below finding solace just above the 10,035 support level. A break below this level eyes subsequent floors at 10,000, the 61.8% extension at 9950, and the 9900 level. Our medium-term bias remains weighted to the topside as traders seek refuge in the perceived safety of the reserve currency.

The greenback fell against all four component currencies highlighted by a 0.29% decline versus the British pound. Both the pound and the euro were well supported today after a Spanish bond auction was well received by investors and temporarily eased debt concerns. Although the yen was weaker against most of its counterparts, it was stronger against the dollar as risk-on flows saw dollar losses outpace those of the yen with the low yielder advancing 0.21% against the greenback. The aussie was the worst performer of the lot with an advance of just 0.09% on the session as traders remained reluctant to move into the aussie amid continued weakness in commodity prices. As noted in today’s AUD/USD Scalp Report, ongoing growth concerns, specifically as it pertains to China, continue to weigh on the aussie with the high yielder likely to remain under pressure in the coming days.

Tomorrow’s economic docket is highlighted by the November consumer price index with consensus estimates calling for prices to hold at an annualized rate of 3.5% while core prices are expected to hold at 2.1% y/y. The dollar is likely to remain well supported with an at-expectation print or better after the Fed made no mention of further quantitative easing at this week’s FOMC rate decision. In the meantime the greenback will continue to be a barometer of broader market sentiment with a shift back into risk aversion likely to see the dollar make another attempt at a breach above the 10,070 level.