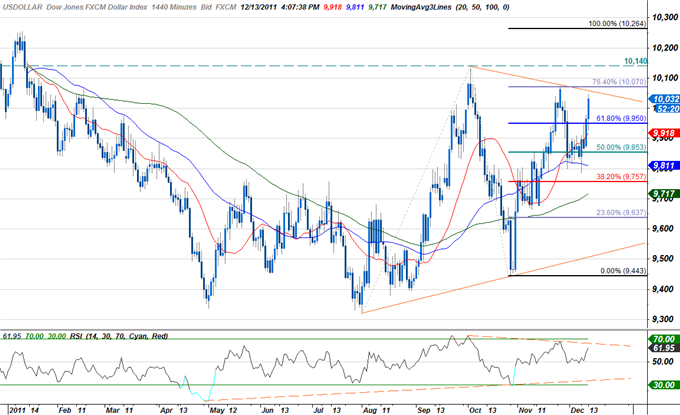 The greenback advanced for a second consecutive day at the close of North American trade with the Dow Jones FXCM Dollar Index (Ticker: USDollar) advancing 0.72% on the session. Equity markets relinquished early gains after reports cited that German Chancellor Angela Merkel had rejected proposals to increase the firepower of the ESM (European Stability Mechanism) sovereign bailout fund. Exacerbating the decline in risk appetite was the FOMC rate decision where the central bank reiterated that rates are to stay near record lows through mid-2013 as “Strains in global financial markets continue to pose significant downside risks to the economic outlook.” The Fed made no mention as to another round of quantitative easing, sparking a sell-off in stocks with the Dow, the S&P, and the NASDAQ closing lower by 0.55%, 0.87% and 1.26% respectively. Although the central bank did say that they will continue “its program to extend the average maturity of its holdings of securities” dubbed by market participants as “operation twist,” the omission of further easing measures weighed on risk appetite with higher yielding currencies coming under pressure as investors flocked into the perceived safety of the reserve currency and the Japanese yen.

The dollar held above the key 61.8% Fibonacci extension taken from the August 1st and October 27th troughs at 9950 cited in yesterday’s report. This level remains paramount for the greenback with topside targets held at trendline resistance dating back to the October highs, the 76.4% extension at 10,070 and the November nine-month high at 10,140. Subsequent targets are held higher at the 100% extension at 10,260 and 10,400. Note that a steeply sloped RSI suggests that the index may yet have room for topside moves as the index looks poised test daily RSI trendline resistance. 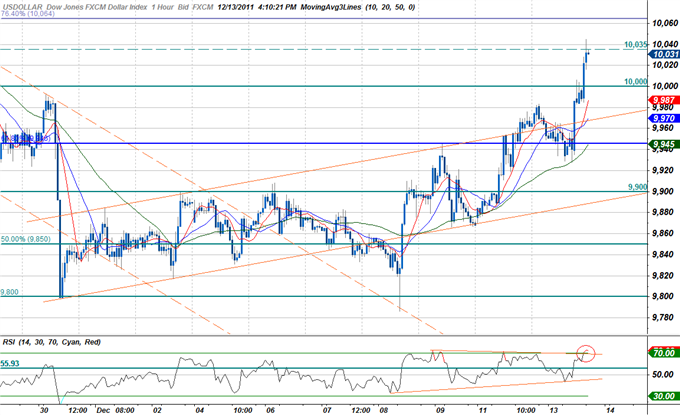 An hourly chart shows the index breaching channel resistance before encountering resistance at the 10,035 level. The move was coupled with an RSI breach into overbought territory with a likely short-term pullback in the interim eyeing support targets at 10,000, 9980, and the 61.8% Fibonacci extension at 9950. The medium to longer-term outlook for the dollar remain weighted to the topside in light of today’s developments.

The greenback advanced against all four component currencies highlighted by a 1.17% advance against the euro. As prospects for the Euro zone turn increasingly bleak, the euro has come under substantial pressure with the single currency off by more than 2.64% in the first two days of this week alone. Look for any positive developments to spark a relief rally of some magnitude, with our medium-term bias remaining weighted to the downside. Higher yielding currencies like the aussie also came under pressure sought refuge in lower yielding “haven” assets. The yen was the best performer of the lot with a marginal decline of just 0.09% as a flight to safety supported the low yielder. However with intervention concerns continuing to temper gains, advances in the greenback should continue to outpace those of the yen.

Tomorrow’s economic docket offers little in the way of event risk for the dollar with November import prices the only piece of data on tap. Consensus estimates call for prices to rise by 1.1% m/m, up from a previous decline of 0.6% m/m, while the year on year print is expected to climb to 10.4% y/y from 11.0% y/y. Accordingly dollar price action will continue to take cues off of broader market sentiment with ongoing concerns over deteriorating conditions in Europe likely to weigh on risk-appetite and continue to support the reserve currency and US Treasuries.