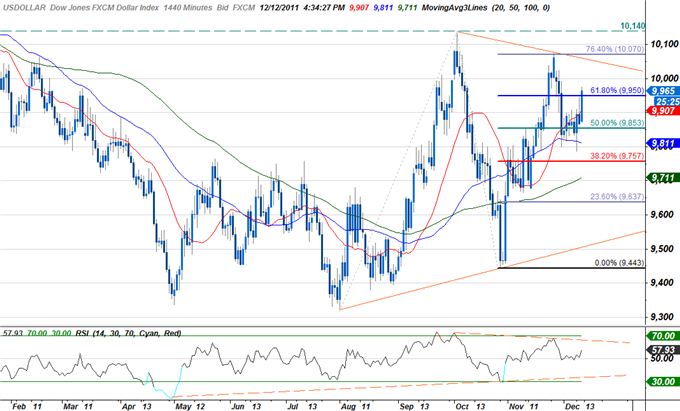 The greenback was sharply higher at the close of North American trade with the Dow Jones FXCM Dollar Index (Ticker:USDollar) advancing 0.93% on the session. Equity markets tumbled today as ongoing European debt concerns were exacerbated by a statement from rating agency Moody’s who warned that all the EU nations would be put on review after last week’s EU summit failed to yield, “decisive policy measures” to address the region’s deepening crisis. Yields on European sovereign debt rose with Italian, Spanish, and French paper coming under pressure as traders sought refuge in the German Bund and US Treasuries. US stocks were down sharply at the close, albeit off session lows, with the Dow, the S&P, and the NASDAQ off by 1.34%, 1.49%, and 1.31% respectively.

A fresh Fibonacci extension taken from the August 1st and October 27th troughs shows the index breaching the 20-day moving average and the 61.8% extension at 9950 to close at 9965. Interim support rests with the 61.8% extension followed by the 50% extension at 9850 and 9800. Initial resistance now stands with trendline resistance dating back to the October 4th top with subsequent ceilings seen at 76.4% extension at 10,070 and 10,140. An upwardly sloped RSIsuggests the dollar remains poised for further gains, although the magnitude of today’s advance is likely to see a short-term pullback before continuing higher. 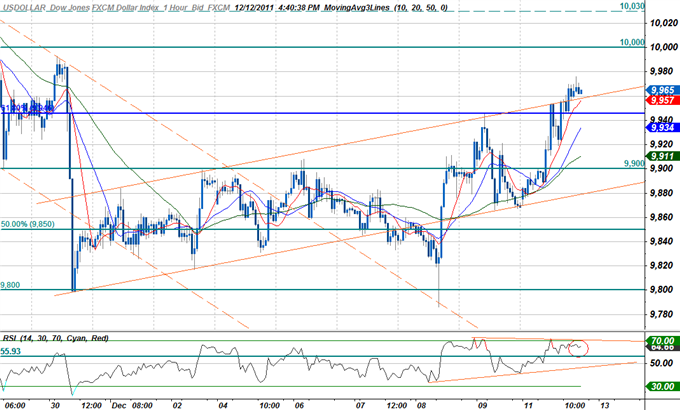 An hourly chart shows the index closing above channel resistance dating back to the start of the month after breaking above the 61.8% Fibonacci extension taken from the August 1st and October 27th troughs at 9946. Interim resistance stands at the psychological 10,000 mark and is backed by soft resistance at 10,030. Support now rests at 9946 with subsequent floors seen at 9900 followed by channel support, the 50% extension at 9850, and 9800.

The greenback advanced against all four component currencies highlighted by a 1.49% advance against the euro. As markets now brace for the possibility of further sovereign debt downgrades, the focus remains fixated on Europe’s most indebted periphery nations as yields continued to climb. The Australian dollar closed off by 1.35% as classic haven flows saw traders jettison higher yielding assets in favor of the perceived safety of the reserve currency. The yen was the best performer of the lot with a decline of just 0.35% as a flight to safety benefitted the low yielder. Still, the rally in the yen was outpaced by those of the dollar as intervention concerns are likely to keep yen advances tempered.

Tomorrow’s economic docket is highlighted by the November advanced retail sales report and the FOMC interest rate decision. Sales are expected to show further strength with consensus estimates calling for a print of 0.6%, up from a previous read of 0.5%. Although the Fed is widely expected to hold the benchmark interest rate at 0.25%, investors will be closely eyeing the accompanying policy statement for insight into the central bank’s assessment of the economy. Traders will be specifically looking for references to further quantitative easing as improving economic data out of the world’s largest economy continue may see committee stray away from further easing measures in the interim. Accordingly the dollar is likely to remain well supported should the statement suggest that another round of quantitative easing is off the table. However with the European crisis continuing to cast a shadow over the global recovery, Bernanke and company may see fit to leave the door open for another round of large-scale asset purchases as the threat of sovereign defaults materialize.