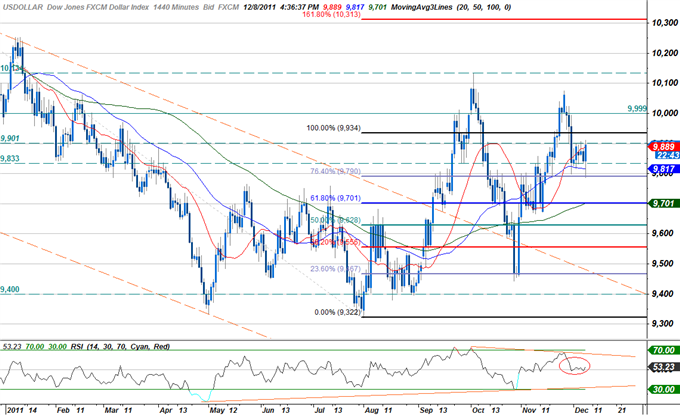 The greenback was stronger at the close of North American trade today with the Dow Jones FXCM Dollar Index (Ticker:USDollar) advancing 0.53% on the session. Although rate decisions from the BoE and the ECB came in at expectations, remarks made by ECB President Mario Draghi fueled a massive global risk sell-off after he cited that the ECB would not continue purchasing sovereign debt to cap bond yields. One of the major takeaways is that the voting members were not unanimous in this decision, suggesting a growing rift in the central bank may be taking root just two months after former president Jean-Claude Trichet stepped down. With markets eagerly anticipating the results from the EU summit tomorrow, the news continues to fuel further bearish sentiment as officials scramble to come up with a viable and concrete solution to Europe’s crisis. Stocks closed sharply lower on the day as Treasury yields plummeted with the Dow, the S&P, and the NASDAQ ending the session off by 1.63%, 2.11%, and 1.99% respectively.

The dollar briefly broke below the 9830 level cited over the past week as key support before surging on Draghi’s remarks as investors aggressively sold-off risk in favor of the perceived safety of the greenback. The index closed just below interim resistance at 9900 with a breach here eyeing topside targets at the 100% Fibonacci extension taken from the 2010 and 2011 lows at 9934 and 10,000. Key daily support continues to hold at the 76.4% extension at 9790 with subsequent floors seen at the 61.8% extension at 9700. Note that the dollar continues to range between the 20 and 50-day moving averages at 9889 and 9817 respectively with a steepening RSI suggesting the dollar may be poised for a break higher in the interim. 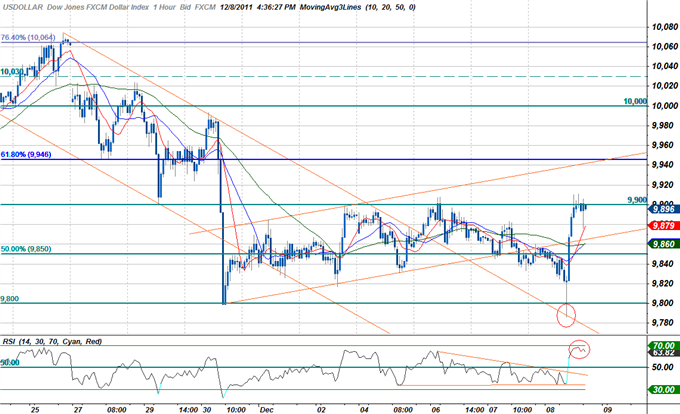 An hourly chart shows the index rebounding off support at 9800 before breaking back into the ascending channel formation dating back to the November 30th low. Against we note interim resistance at 9900 with intra-day topside targets eyed at the convergence of channel resistance and the 61.8% Fibonacci extension taken from August 1st and October 27th troughs at 9946. A break here exposes subsequent targets at 10,000, 10,030, and the 76.4% extension at 10,060. Interim support holds with the lower bound channel trendline backed by 9800 and the 38.2% extension at 9754.

The greenback advanced against all four component currencies highlighted by a 1.21% advance against the Australian dollar. The aussie alongside the kiwi and loonie were the worst performing currencies against the dollar as traders jettisoned higher yielding assets in favor of safety. Weaker than expected employment data out of Australia last night also added to the downside pressure after the RBA cut interest rates a day earlier citing concerns over the European crisis as well as an expected slowdown in Chinese demand. The euro and the sterling were also heavy throughout the session, sliding 0.48% and 0.45% respectively. The Japanese yen was the top performer against a stronger dollar with a fractional decline of just 0.01% as risk aversion flows saw dollar advances outpace those of the yen. The low yielder was stronger against all the majors save the dollar as the yen continues to maintain its haven status.

Investors will be eyeing tomorrow’s US economic calendar with the October trade balance figures and the December University of Michigan confidence survey on tap. Consensus estimates call for the trade deficit to show a marginal contraction with a print of -$43.0B, from a previous read of -$43.1B in September, while confidence is expected to improve to 65.5 from a previous print of 64.1. Should confidence come in at expectations, the print would be the highest read on the survey since June and could fuel further flows into the dollar.

The single largest event risk this week comes in tomorrow with the conclusion of the EU summit as investors look for officials to outline a plan to strengthen fiscal integration among member nations and finally provide relief for the debt crisis which has dominated headlines for more than year. Rumors of further dissention among leaders surfaced towards the end of the session in New York as report cited that Germany had rejected proposed measures at the summit regarding a permanent bailout fund and the issuance of a common euro zone bond. With so much at stake, tomorrow’s price action could be profound for the dollar as investors contemplate the possibility of the demise of the euro.