US Dollar Slides Ahead of BoE, ECB- Index Holds Above Key Support 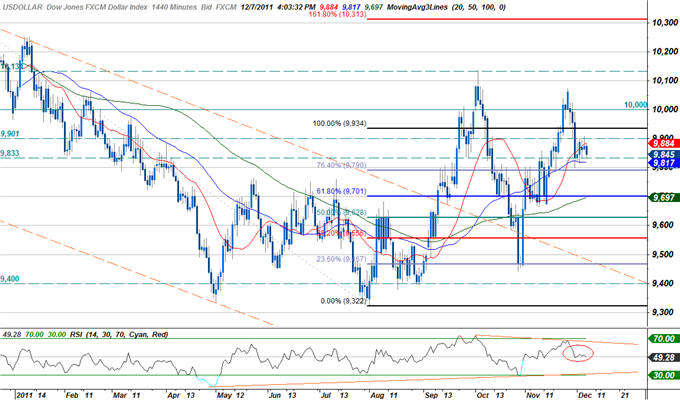 The greenback was weaker at the close of North American trade with the Dow Jones FXCM Dollar Index (Ticker:USDollar) sliding 0.38% on the session. Markets continue to sharply react to any headlines crossing the newswires with today’s rumor from the Nikkei regarding a possible $600 Billion IMF lending program for Europe sparking a rally in risk that lifted the major indices to session highs 20mins ahead of the close. As expected, the rumor was quickly refuted minutes later with stocks paring gains to close well off session highs. When all was said and done, the Dow and the S&P were higher by 0.38% and 0.20% respectively with the NASDAQ closing virtually flat on the session. The move demonstrates the extreme hypersensitivity in today’s environment as markets yearn for resolution to the crisis which has continued to fuel radical swings in sentiment on almost a daily basis.

The dollar continues to hold above the 9830 support level cited in previous reports with the index trading within its recent range throughout the session. Interim daily resistance holds at 9900 with stronger resistance seen just higher at the 100% Fibonacci extension taken from the 2010 and 2011 lows at 9934. A break below 9830 eyes the 76.4% extension at 9790 and the 61.8% extension at 9700. Look for the greenback to continue to consolidate into the close of the week with our medium term bullish bias remaining intact so long as the index holds above 9700. Note that the index continues to range between the 20 and 50-day moving averages at 9884 and 9817 respectively with a flattening RSI suggesting the dollar may be poised for a break lower in the interim. 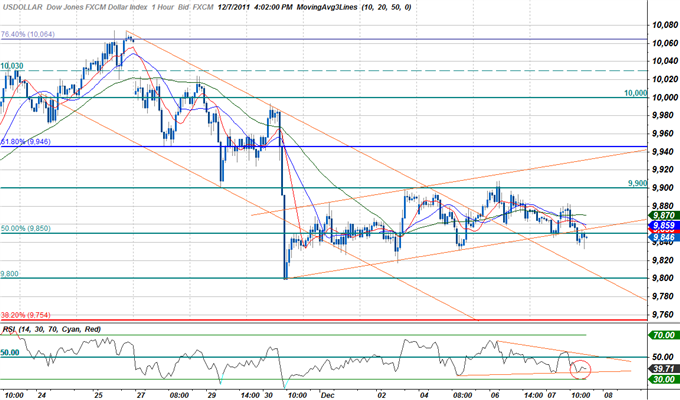 An hourly chart shows the index breaking below the convergence of the 50% Fibonacci extension taken from the August 1st and October 27th troughs at 9850 and channel support dating back to the November 30th low. However the move lacked any follow through and the index may quickly pare losses should market sentiment shift ahead of key event risk tomorrow and Friday. Interim support now rests with former channel resistance from the previous descending channel followed by 9800 and the 38.2% extension at 9754. A break back above the 50% extension eyes topside targets at 9900 and the 61.8% extension at 9946.

The greenback fell against all four component currencies highlighted by a 0.74% declines against the British pound which bested all the majors after moving more than 89% of its daily average true range. We highlighted the pound’s advance in this morning’s Winners/Losers report as traders looked to close out shorts ahead of the BoE rate decision tomorrow morning. The yen was the weakest performer of the lot with a marginal advance of just 0.11% on the session. Despite the gains, the USD/JPY continues to hold within a tight range between 77.65 and 77.85 with our longer-term outlook weighted to the topside.

Tomorrow’s US economic calendar provides little in the way of event risk with weekly jobless claims and October wholesale inventories the only piece of data on the docket. Traders will continue to eye developments out of Europe with the BoE and ECB rate decisions on tap tomorrow morning. Although the BoE is widely expected to hold rates, the MPC could move to further expand the central bank’s asset purchases after UK growth forecasts were lowered last week. Contrastingly, the ECB is expected to cut rates by 25 basis points as ECB president Mario Draghi and company brace for what is anticipated to be a “mild recession.” Investors will be lending a keen ear to the subsequent press conference where Draghi will outline the ECB’s assessment of the health of the currency bloc. The EU summit which concludes on Friday remains the single largest event risk this week as investors look for officials to outline a plan to strengthen fiscal integration among member nations and finally provide relief for the debt crisis which has dominated headlines for more than year. The dollar remains at risk here as a firm resolution from European officials could see a surge in risk appetite as debt concerns subside, with such a scenario likely to weigh heavily on the dollar as traders go back on the hunt for yields.