USD to Advance as Stocks Drift Ahead of Significant Event Risk 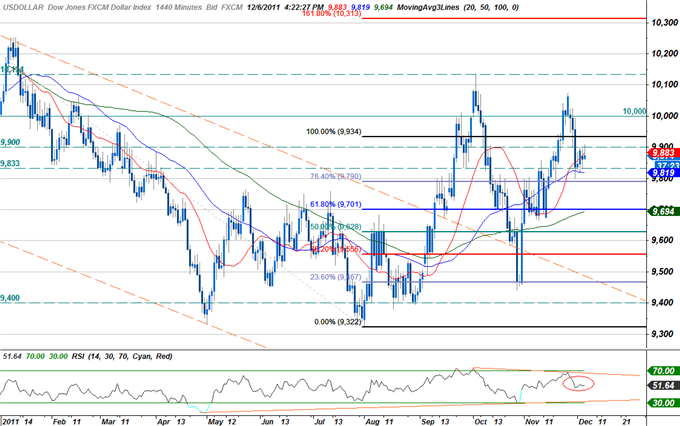 The greenback was firmer at the close of North American trade with the Dow Jones FXCM Dollar Index (Ticker:USDollar) climbing a modest 0.19% on the session. Markets continue to lack conviction ahead of major event risk later this week as traders look to interest rate decisions from the RBNZ, BoE, and the ECB, and Friday’s much anticipated EU summit. Reaction to yesterday’s credit watch warning from rating agency Standard & Poor’s saw a mixed performance in European equities which carried over into the US session with the Dow and the S&P climbing 0.43% and 0.11% respectively, while the NASDAQ fell by 0.23%.

The dollar continues to hold above the 9830 level cited in previous reports with a test of topside resistance at 9900 failing to produce any significant advances for the reserve currency. A fresh long-term Fibonacci extension taken from the 2010 and 2011 lows offer better guidance moving forward with downside support highlighted by the 76.4% extension at 9790 and key 61.8% extension at 9700. Daily topside targets are held at the 100% extension at 9930 and the psychological 10,000 level. Look for the greenback to continue to consolidate into the close of the week with our medium term bullish bias remaining intact. Note that the index continues to hold between the 20 and 50-day moving averages at 9883 and 9819 respectively with a flattening RSI suggesting the dollar may be poised for a breakout. 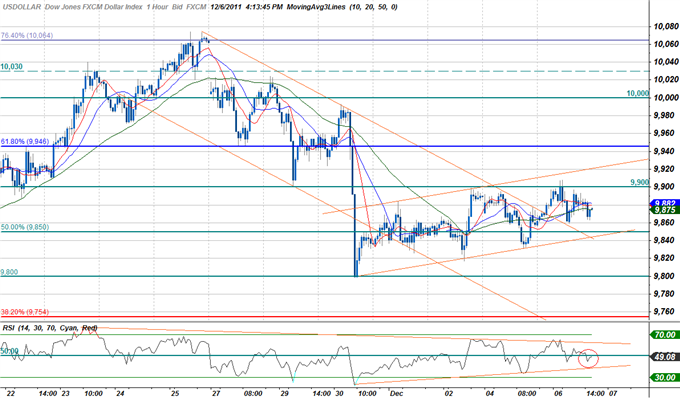 An hourly chart shows the index trading within the confines of a newly formed ascending channel formation after breaking a previous channel dating back to November 25th. Interim support now rests at the convergence of channel support and the 50% Fibonacci extension taken from the August 1st and October 27th troughs at 9850, with subsequent floors seen at 9800 and the 38.2% extension at 9754. And RSI break above 50 eyes topside resistance at 9900 with a breach here eyeing targets at the 61.8% extension at 9946 and 10,000.

The greenback advanced against three of the four component currencies highlighted by a 0.35% advance against the British pound. The sterling, which is featured in today’s Scalp Report, continues to face headwinds ahead of the Bank of England rate decision on Thursday with ongoing concerns about the European crisis and its impact on the UK continuing to limit advances in the pound. The strongest performer of the lot was the yen which advanced a modest 0.11% as yen advances outpaced those of the dollar. As risk continues to taper off, both the yen and the dollar look to benefit as traders seek refuge in lower yielding assets. The euro was virtually unchanged on the session as price action continues to hold between the 61.8% and 50% Fibonacci extensions taken from October 27th and November 13th crests at 1.3335 and 1.3425 respectively. Click here for EUR/USD scalp chart.

Tomorrow’s US economic calendar provides little in the way of event risk with dollar price action likely to continue to take cues from broader market sentiment. Accordingly the reserve currency may within its recent range as traders eye GDP figures out of Australia later tonight and data out of Europe tomorrow with the UK industrial/manufacturing production, and German industrial production on tap.

Join Michael tomorrow for Live Coverage of the US NFP Print at 1315GMT (8:15ET)