What Do NFPs Tomorrow Mean for the Dollar? 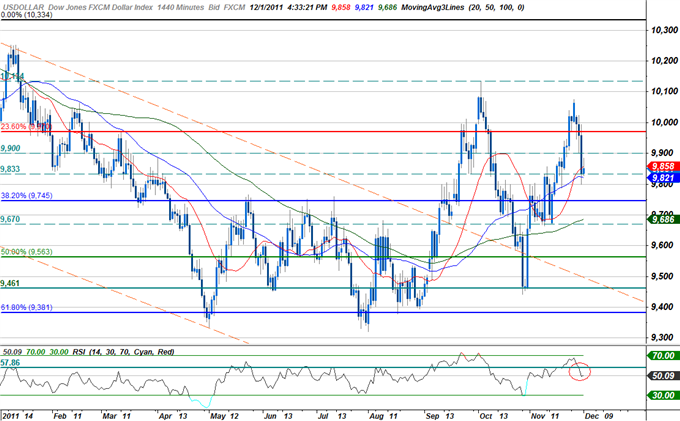 The greenback reversed course in North American trade after three consecutive days of sharp declines with the Dow Jones FXCM Dollar Index (Ticker:USDollar) closing well off its highs for a modest advance of just 0.17%. The reprieve in dollar selling came as broader risk appetite diminished ahead of key employment data out of the US tomorrow. Mixed economic data out of the US this morning contributed to the lackluster performance in stocks with the Dow and the S&P advancing 0.21% and 0.19%, while the NASDAQ managed to stay in the black with an advance of 0.22%.

The dollar held above the 9830 level noted in yesterday’s USD Trading report as risk currencies pared advances from earlier in the week. Daily interim support holds here with topside targets eyed at 9900 and the 23.6% Fibonacci extension taken from the June 2010 and November 2010 crests at 9970. Note that the index currently rests between the 20 and 50-day moving averages at 9858 and 9820 respectively with a flattening RSI suggesting the dollar may be poised for a breakout. A topside break of RSI resistance would further support topside moves in the greenback. 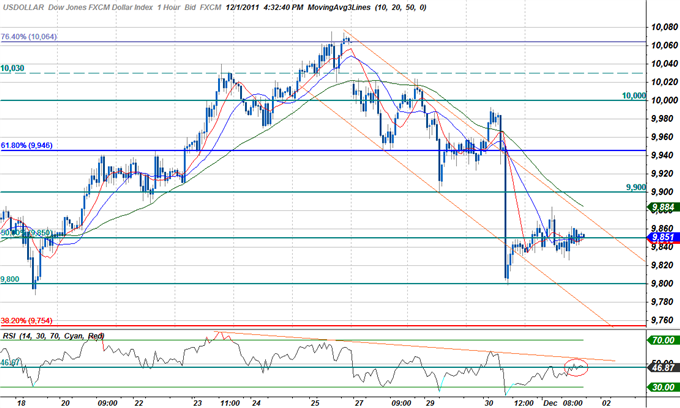 An hourly chart shows the index holding within the confines of the descending channel which has been compromised twice already since the start of the week. The dollar continues to straddle the 50% Fibonacci extension taken from the August 1st and October 27th troughs at 9850 with subsequent floors seen at 9800 and the 38.2% extension at 9754. A breech above channel resistance coupled with an RSI break above trendline resistance eyes topside targets at 9900, the 61.8% extension at 9946, and the 10,000 level.

The greenback advanced against three of the four component currencies highlighted by a 0.54% advance against the Australian dollar. The aussie’s decline comes on the heels of the largest three day advance in over three years as traders unwound risk-on trades ahead of major US event risk tomorrow. The euro is the top performer of the lot and has remained surprisingly resilient with a fractional advance of just 0.10% amid a quiet session in New York. Next week will be a crucial one for the single currency with the ECB rate decision and the EU summit on tap. As noted in today’s Winners / Losers report the summit will be paramount for the euro with German Chancellor Angela Merkel and French President Nicolas Sarkozy expected to reveal a new proposal on a so-called euro zone overhaul. The sterling and the yen were both marginally lower on the day as the battered dollar struggled to recover from the massive sell-off seen yesterday.

Traders will be eyeing key economic data tomorrow highlighted by November non-farm payrolls and the unemployment rate. Consensus estimates call for employment in the world’s largest economy to increase by 125K, up from a previous print of 80K, while the unemployment rate is expected to hold at 9.0%. The implications for the print are profound with a faster pace of job growth likely to dampen expectations for further quantitative easing from the Federal Reserve as officials continue to call for private sector growth to gradually improve over the coming quarters. However to effectively reduce the unemployment rate, job creation would need to top 400K a month and the print may see a subdued reaction if the data fails to impress. The dollar is likely to react favorably to a strong print as expectations for further dollar diluting measures from the central bank diminish.

Join Michael tomorrow for Live Coverage of the US NFP Print at 1315GMT (8:15ET)