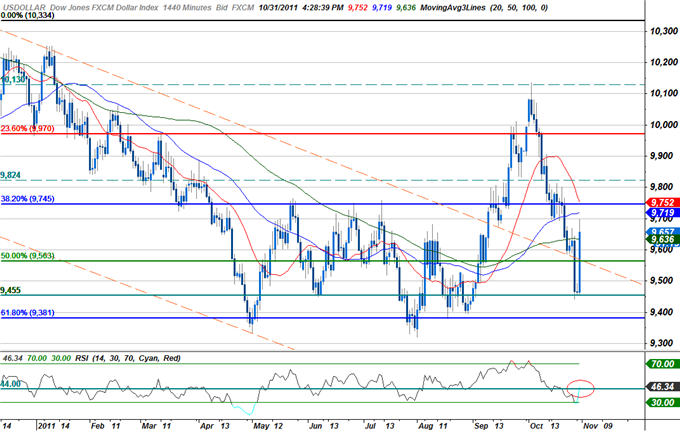 The greenback surged in North American trade with the Dow Jones FXCM Dollar Index(Ticker: USDollar) soaring 2.01% on the session. US equity markets followed suite from a dismal performance in European stocks with the Dow, the S&P, and the NASDAQ plummeting 2.26%, 2.47%, and 1.93% respectively. Traders unwound risk trades at the close of the month today with higher yielding currencies coming under considerable pressure as Treasuries climbed and yields fell. Renewed concerns over the viability of the European rescue plan were called into question after Greek Prime Minister Papandreou called for a referendum on the newly proposed package. The news fueled speculation that the rescue plan may lack support jeopardizing stability in the region which had recently sounded a sigh of relief on the passage of the bailout package. Coupled with an intervention from the Japanese Finance Ministry, the risk trade come under substantial pressure as the re-established its footing and went on the offensive.

The dollar broke above key resistance at the convergence of long-term trendline resistance and the 50% Fibonacci extension taken from the June 2010 and November 2010 crests at 9563 before losing steam just ahead of the 9700 mark. A hold above this level remains paramount for the index with a break back below risking significant losses. Note that daily relative strength looks poised for a move above interim RSI resistance at the 44-level. A topside break bodes well for further dollar advances. 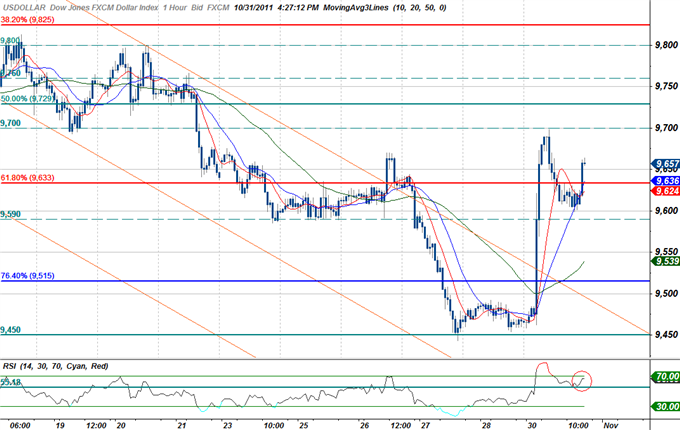 The greenback advanced against all four component currencies highlighted by a 2.98% advance against the Japanese yen which moved a staggering 570% of its daily average true range. As noted in this morning’s Winners / Losers report, the yen suffered substantial losses after the Japanese Finance Ministry intervened to stem the rapid rise currency in an attempt to protect the export driven economy. Although the yen suffered nearly 400 pips on the heels of the intervention last night, the USD/JPY pair now sits more than 150 pips off the overnight high around 79.50. Historically, investors have used interventions as an opportunity to fade the massive run-up with the pair likely to gradually come under pressure in the coming days. Price action continues to respect the sterling scalp targets noted on Thursday’s report, with the GBP/USD pair closing just above support target 1 at 1.6075.

The Euro follows closely with a loss of 2.14% against the greenback as doubts regarding the sustainability of region’s debt loads mounted with investors closely eying Italy after spreads between Italian and German debt reached their widest levels since the inception of the euro. The Australian dollar also came under pressure as traders jettisoned higher yielding assets in favor of the greenback with the pair off by more than 1.46% at the close of trade in New York. The top performer of the lot was the sterling which continued to lag the majors with investors eagerly awaiting tomorrow’s 3Q GDP data. The data is expected to confirm slowing growth in the UK with expectations for a print of just 0.4% y/y, down from a previous read of 0.6%.

Tomorrow’s economic docket is highlighted by September construction spending and October ISM data. Construction spending is expected to have softened in September with consensus estimates calling for a print of just 0.3% m/m, down from a previous read of 1.4% m/m. ISM manufacturing is released at the same time with median forecasts calling for a slight improvement to 52.2 from 51 while prices paid are expected to ease to 55.0 form 56.0. Despite the significance of tomorrow’s data, markets may be rather muted ahead of key data this week with interest rate decisions on tap from the ECB and the FOMC and Friday’s much anticipated non-farm payroll report. Note that overnight investors will be closely eyeing the RBA interest rate decision where the central bank is widely expected to cut interest rates by 25 basis points. Credit Suisse overnight swaps are currently factoring in an 83% chance for a cut tonight with twelve month expectations calling for a 105 basis points in additional cuts.