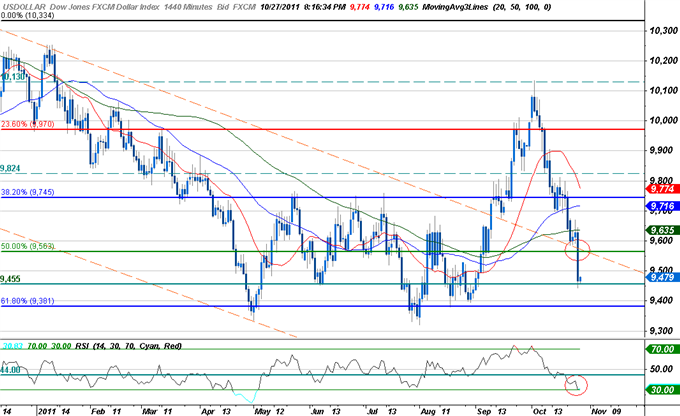 The greenback suffered massive losses in North American trade with the Dow Jones FXCM Dollar Index(Ticker: USDollar) plummeting 1.69% on the session. Euphoria over the European crisis plan and a string of stronger than expected economic data fueled a substantial rally in risk with the Dow, the S&P, and the NASDAQ soaring 2.86%, 3.43%, and 3.32% by the close of trade. The rally was carried over from European markets which surged across the board with the CAC 40 and the DAX advancing 5.35% and 6.28% respectively. Stocks now are poised to post their largest monthly advance in nearly 37 years with both the two major averages up more than 9% in October alone. The implications for the greenback are profound as markets turn focus back to domestic affairs with the reserve currency at risk for further losses after breaking key support with price action moving back into a descending channel formation dating back to November.

The dollar broke crucial support at the convergence of long-term support and the 50% Fibonacci extension taken from the June 2010 and November 2010 crests at 9563 before finding solace at 9450. A break here risks significant losses for the greenback with no support in view until the 61.8% extension at 9380. Note that daily relative strength looks to cross below 30 into oversold territory and although further losses are expected, a pullback of some magnitude is likely before posting lower lows. 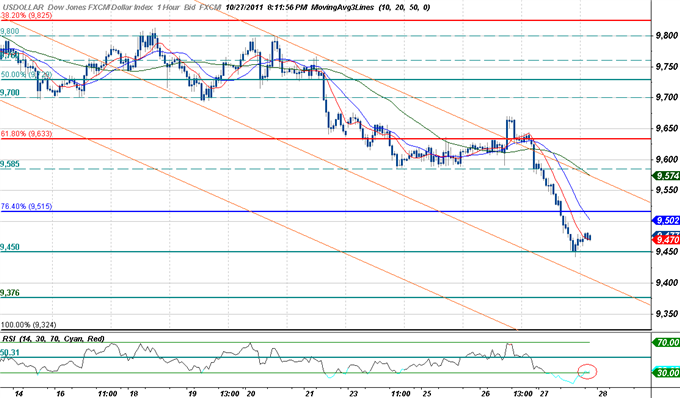 An hourly chart shows the index breaking below the 76.4% Fibonacci retracement taken from the August 1st advance at 9515 before encountering support at the 9450 level. Crucial support now rests here with a break eyeing subsequent floors at 9376 and the 100% retracement at 9324.Topside resistance holds at 9515 followed by the 9585 and the 61.8% retracement at 9633.

The greenback fell against all the component currencies highlighted by a staggering 3.18% decline against the Australian dollar. The aussie surged as improved risk appetite saw traders go back on the hunt for yields. The euro followed up with a 2.04% advance as debt concerns eased and traders saw a massive unwinding of shorts triggered by yesterday’s EU announcement. As detailed in today’s Scalp Report, the sterling lagged most of the majors despite significant dollar losses with the pound climbing just 0.78% on the session. The worst performer of the lot was the yen which advanced 0.27% after making fresh record highs against the dollar at 75.65 earlier in the session. Although intervention fears have limited the magnitude of the yen’s ascent, its likely traders will test the BoJ’s resolve once more before coming off.

Tomorrow’s economic docket is highlighted by the September personal income/spending data and the final University of Michigan confidence survey. Both income and spending are expected to improve with consensus estimates calling for income to rise by 0.3% from -0.1% with spending rising by 0.6%, up from a previous read of 0.2%. Confidence data wraps up the week with expectations for a read of 58.0 from 57.5. The data has the capacity to further fuel the recent rally in risk after consumer confidence data posted its lowest print since March of 2009 earlier in the week.