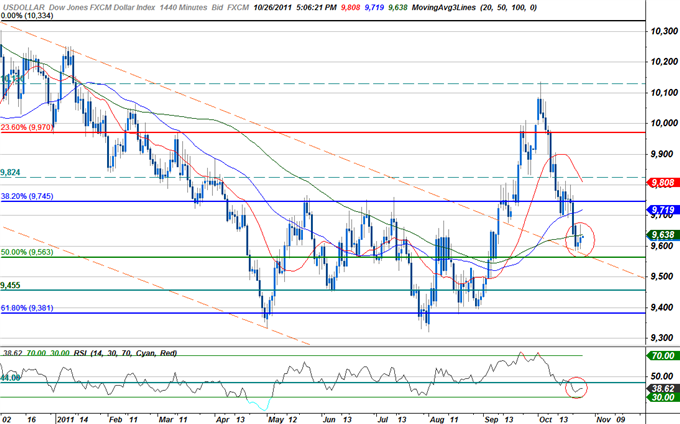 The greenback was stronger at the close of North American trade with the Dow Jones FXCM Dollar Index (Ticker: USDollar) advancing a modest 0.18% after paring the bulk of the day’s gains. Despite an extremely volatile session equity markets were markedly higher at the close with the Dow, the S&P, and the NASDAQ advancing 1.39%, 1.05%, and 0.46% respectively. Investors eagerly anticipated developments out of Europe after officials wrapped up the highly publicized EU summit where discussions about how to resolve the ongoing debt crisis in Europe yielded little clarity to market participants. Stocks seemingly shrugged off European concerns as a mid-day rally erased early losses, with the dollar simultaneously paring early gains.

In a statement released by the EU, officials listed key points that were to be addressed urgently including ensuring medium funding for banks and the need to enhance the quality and quantity of bank holdings so as to withstand unforeseen economic shocks. The statement went into further details on capital ratios with “broad agreement” on raising the required amount to 9% in order, “to create a temporary buffer, which is justified by the exceptional circumstances.” Although details about the structure and logistics of implementing such framework have yet to be released, markets seem to have taken the news in stride, with equities closing just off session highs.

The dollar continues to hold above crucial support at the former long-term trendline resistance noted yesterday. The index continues to hold below the 100-day moving average at 9638 with a break above eyeing longer-term targets at the 38.2% Fibonacci extension taken from the June 2010 and November 2010 crests at 9745.The 50% Fibonacci extension at 9563 remains paramount for the greenback, with a break here risking substantial dollar losses. Note that daily RSI continues to level out suggesting price action lacks clear conviction here. 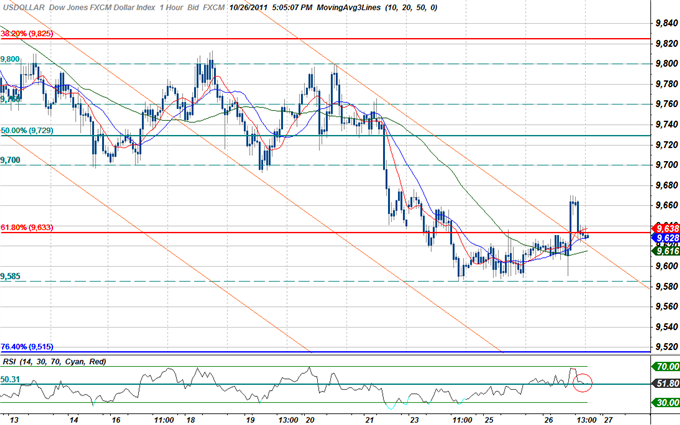 An hourly chart shows the index breaking above the convergence of trendline resistance and the 61.8% Fibonacci retracement taken from the August 1st advance at 9633 before losing steam just ahead of the 9680 mark. A mid-day reversal saw the greenback pare early gains to close back below the 9633 level. Interim support now rests with former trendline resistance with a break below eying subsequent floors at 9585 and the 76.4% retracement at 9515. A break back above the 61.8% extension eyes targets at today’s highs followed by 9700 and the 50% retracement at 9730.

The greenback advanced against three of the four component currencies highlighted by a 0.20% advance against the aussie. Although the greenback was higher at the close, it was well off its session highs as risk assets mounted a counter-offensive later in the day. Aussie price levels mapped out in the latest Scalp Report remain intact with our bias remaining weighted to the downside. The euro was the best performer of the lot, advancing a fractional 0.03% after surging off session lows on news that officials were indeed making headway at the EU summit. A look at daily price action again suggests a lack of conviction as markets continue to react to every development out of the region. Risk at this point remains to the downside as investors wait for further details on the proposed package.

Tomorrow’s economic docket sees a flurry of economic data with 3Q GDP, personal consumption, weekly jobless claims, and pending home sales on tap. Consensus estimates call for GDP to grow by an annualized 2.5% in the third quarter, up from a previous read of 1.3%. Personal consumption is expected to see an even larger jump with estimates calling for a print 1.9%, up from a previous read of just 0.7%. Investors get an update on the housing market tomorrow with September pending home sales expected to rise by 10.8% y/y, easing off a 13.1% y/y print the previous month. If European developments continue to appease markets, stronger data tomorrow could see stocks extend today’s rally with the dollar likely to come under pressure once more as investors go back on the hunt for yields.