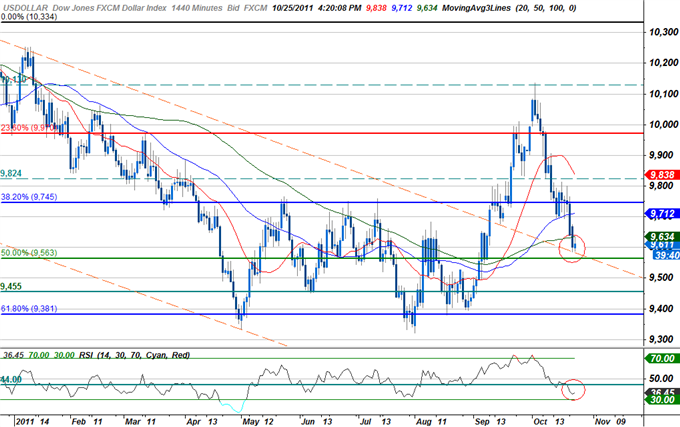 The greenback snapped a five day losing streak today with the Dow Jones FXCM Dollar Index(Ticker: USDollar) advancing a modest 0.13% by the close of US trade. The gain comes on the heels of a dismal performance in equities that saw the Dow, the S&P, and the NASDAQ fall 1.74%, 2.00%, and 2.26% respectively. Cautious guidance from the likes of Netflix and Amazon coupled with the weakest print on consumer confidence since March of 2009, fueled haven flows as investors jettisoned risk assets in favor of US Treasuries and lower yielding currencies. Investors continue eye tomorrow’s EU summit where leaders are scheduled to announce new measures to ensure stability in the region and put an end to the debt crisis which has ravaged the region for well over a year now. However with expectations for a “euro-fix” continuing to climb, risk remains heavily weighted to the downside as its likely that the plan will not address the longer-term structural issues plaguing the region.

The dollar held above crucial support at the former long-term trendline resistance noted yesterday. The index tested the 100-day moving average at 9634 before paring gains later in the session. A break above this level puts longer-term targets at the 38.2% Fibonacci extension taken from the June 2010 and November 2010 crests, back into view. The 50% Fibonacci extension at 9563 is now key for the greenback with a break here risking substantial losses. Note that RSI looks to turn ahead of the 30-level with a break back above the 44-mark supporting the argument for further dollar advances. 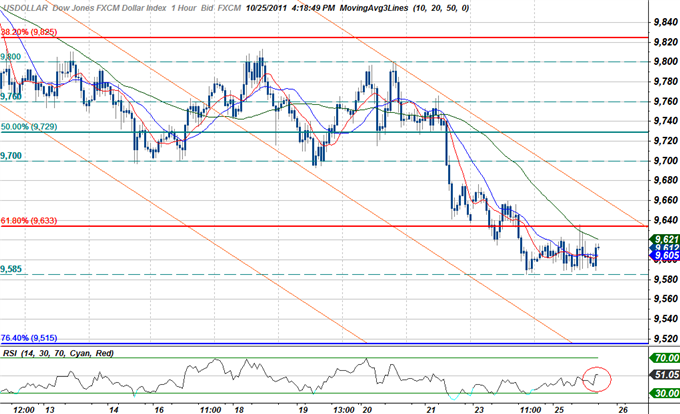 An hourly chart shows the index holding above the 9585 interim support level. As noted in yesterday’s report, a break below this level risks significant losses for the greenback with subsequent floors seen lower at the 76.4% Fibonacci retracement taken from the August 1st advance at 9515 and 9450. Topside resistance holds at the 61.8% retracement at 9633 followed by 9700, the 50% retracement at 9730, and 9760.

The greenback weakened against two of the four component currencies highlighted by a 0.21% decline against the Japanese yen. As noted in today’s Winners/Losers Report, the yen has continued to strengthen as increased speculation that the Fed may look to implement another round of quantitative easing saw haven flows diverted into the low yielding yen. This same effect can be seen in the Swiss franc which also advanced against the dollar today. It should come as no surprise that the Australian dollar is the worst performer of the lot today with a decline of 0.46% against the reserve currency. The aussie remains under pressure as market sentiment deteriorates ahead of tomorrow much anticipated European announcement. Our Aussie scalp setup awaits further downside pressure to trigger with traders eyeing inflation data overnight. The euro drifted ahead of tomorrow’s event risk with the single currency shedding 0.19% by the close of trade in New York.

Tomorrow’s economic docket is highlighted by the September durable goods orders and new home sales. Orders are expected to slide by 0.7% last month after a previous loss of 0.1%, while new home sales are expected to increase by 1.7% m/m, up from a previous loss of 2.3% m/m. Despite this key data, all eyes will remain fixated on Europe as investors wait to hear details about the proposed plan to shore-up distressed banks and stem the threat of debt contagion to the periphery nations. Should the plan fail to satisfy market participants, look for risk assets to come under substantial pressure, with the dollar likely to strengthen on the back of risk aversion flows.