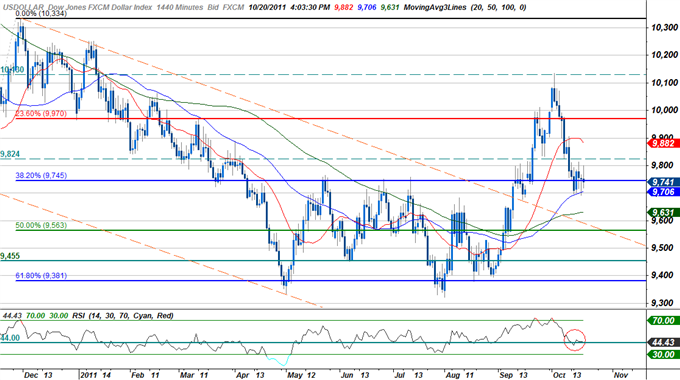 The greenback was weaker at the close of a choppy trading session in North America with the Dow Jones FXCM Dollar Index(Ticker: USDollar) sliding 0.11%. The dollar pared early losses fueled by news that German Chancellor Angela Merkel had cancelled a statement scheduled for tomorrow ahead of the EU summit this weekend. Investors took the news as a sign that officials may be at odds about how the EFSF should be restructured to expand its scope and provide a backstop to indebted Euro zone nations. However later in the day, newswires reported that the European leaders were now planning on holding another summit next week no later than October 26th where officials plan on announcing an “ambitious” package to address the ongoing debt crisis. Details later trickled out throughout the day with Bloomberg reporting that the EU may look to expand the European Financial Stability Facility (EFSF) by as much as $1.3 trillion.

Equities saw a surge in volatility as stocks dipped in and out of positive territory with investors trying to digest a slew of conflicting reports and headlines out of the euro region. The major averages were mixed at the close with the Dow and the S&P closing higher by 0.32% and 0.42% respectively, while the NASDAQ lagged with a loss of 0.21%. With markets sharply reacting to every data point and remark out of Europe, much is now riding on the events of this weekend as participants eagerly wait for leaders to come up with a credible plan to save the Euro zone. In the meantime, pictures and videos of violent demonstrations in Greece dominated headlines as citizens took to the streets to protest the implementation of new strict austerity measures needed to guarantee the next tranche of bailout funds. With the situation now reaching critical mass, officials will need to ensure the proposed crisis package will be “ambitious” enough to calm nervous investors.

The index continues to straddle the 38.2% Fibonacci extension taken from the June 2010 and November 2010 crests at 9745 with a move above interim resistance at 9825 needed to give the greenback enough momentum to break out of its current range. A break below the 50-day moving average at 9706 risks substantial losses for the dollar with no significant support in view until the 100-day moving average at 9630. Note that daily relative strength continues to test RSI support at 45, with a break below likely to weigh heavily on the greenback. 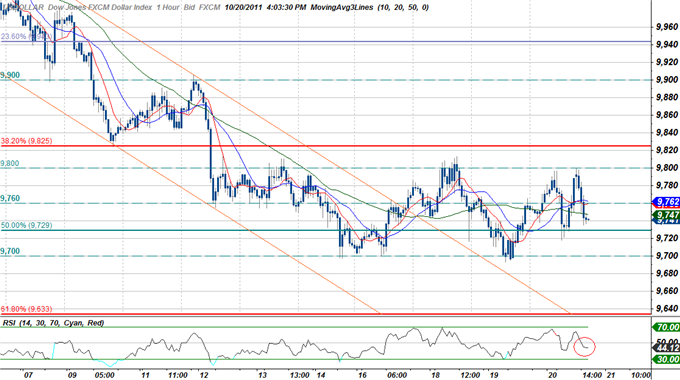 The greenback fell against three of the four component currencies highlighted by a 0.20% decline against the Australian dollar. The aussie pared sharp declines early in the session after news out of Europe supported demand for higher yielding assets. The euro and sterling saw similar price action, with early declines quickly reversing to end the session higher with both currencies advancing 0.16%. The yen was the weakest performer of the lot closing fractionally lower by just 0.04% with the USD/JPY pair continuing to trade within a tight range.

With no economic data out of the US tomorrow, investors will remain poised as central bank and government officials continue to disseminate expectations for this weekend’s EU meeting. The dollar will continue to react sharply to these shifts in expectations as Euro zone nations scramble to come up with a concrete plan to stem the threat of contagion and shore up the regions banks while at the same time satisfying market expectations for an aggressive and viable solution to the ongoing debt crisis that has plagued the region for well over a year now.