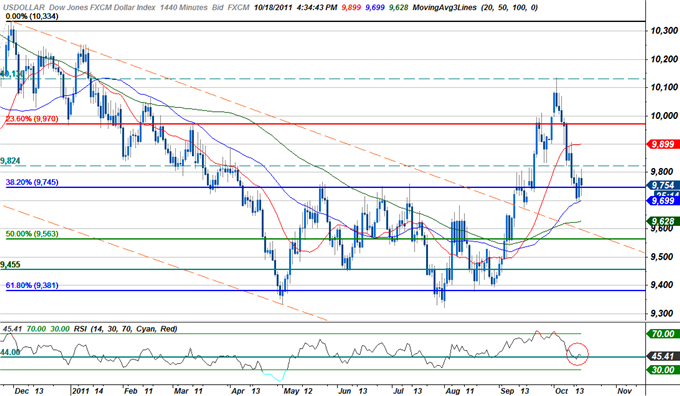 The greenback modestly lower at the close of a volatile US trading session with the Dow Jones FXCM Dollar Index (Ticker: USDollar) sliding 0.20%. Equity markets pared early losses and continued to trade higher into the afternoon hours when news that Germany and France had agreed to increase the EFSF bailout fund by &euro;2 trillion saw stocks break higher. The Guardian report was refuted just moments after with markets sharply paring the majority of the late-day rally. The major averages were markedly higher nonetheless with the Dow, the S&P, and the NASDAQ advancing 1.58%, 2.04%, and 1.63% respectively. Strong corporate earnings and hopes for some sort of resolution this weekend from the EU meeting in Cannes France regarding the European debt crisis have continued to support risk sentiment despite yesterday’s sharp sell-off.

The greenback was higher early in US trade as investors sought refuge amid a lackluster performance in European equities. Dollar gains were slowly eroded throughout the course of the day however as sentiment shifted and stocks steadily advanced. The index closed above the key 38.2% Fibonacci extension taken from the June 2010 and November 2010 crests at 9745. A hold above this level remains paramount for the greenback with a break below eying the 50-day moving average at 9700. Note that daily relative strength looks poised to break below RSI support at 45, suggesting the index may not have the momentum needed to break interim resistance at 9825. 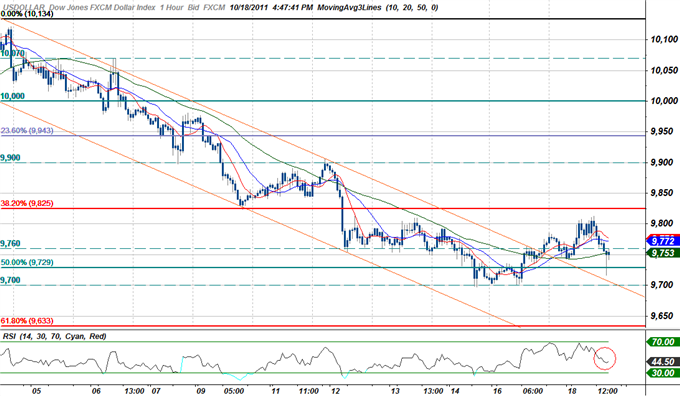 A closer look at the index shows the dollar holding above the 50% Fibonacci retracement taken from the August 1st advance at 9730 after breaking out of the descending channel formation yesterday. Interim support rests here with subsequent floors seen at 9700 and the 61.8% retracement at 9633. Topside resistance holds at 9800 backed by the 38.2% retracement at 9825 and 9900.

The greenback declined against two of the four component currencies highlighted by a 1.24% decline against the Australian dollar. The aussie nearly doubled the day’s advance after rumors of a German/French agreement to expand Europe’s bailout fund hit newswires. Although the data was refuted, the aussie continues to remain well-supported at these levels as broader market sentiment improves. The pound was the worst performer of the lot, down 0.13% against a weaker dollar. As noted in this morning’s Winners/Losers report, the sterling remains under pressure after UK September CPI matched record highs at 5.2% y/y. With the BoE committing an additional £75 billion in bond purchases earlier this month and concerns about domestic growth and exposure to the European crisis mounting, the pound is likely to remain under considerable pressure. Traders will be eying minutes from the last BoE policy meeting tomorrow morning with investors eagerly eyeing the data for insight into the central bank’s outlook and plans to keep the recovery on proper footing.

Tomorrow’s economic docket is highlighted by September CPI and housing data. Inflation in the world’s largest economy is expected to hold within its recent range with consensus estimates calling for a print of 3.8% y/y, with the core figure expected to increase to 2.1% y/y from 2.0% y/y. Although the Fed has stated that inflation expectations are well anchored at these levels, today’s stronger than expected PPI print has trader closely eying tomorrow’s CPI data.

Investors also get an update on the housing sector tomorrow with September housing starts expected to rise by 3.6% m/m with the addition of 592K starts. Consensus estimates call for building permits to ease however, with expectations for a contraction of 2.4% m/m last month after a previous addition of 3.2% m/m. Last on tomorrow’s calendar is the Fed’s Beige Book at 1800GMT where investors will be combing though the report for an updated assessment of current economic conditions in the Federal Reserve’s twelve districts. The greenback remains at risk here, with a continued rally in risk likely to put the dollar back on the defensive as investors go back on the hunt for yields. However with the EU meeting scheduled for this weekend, traders may favor safety as markets wait to hear the proposed plan to save the Euro-region.