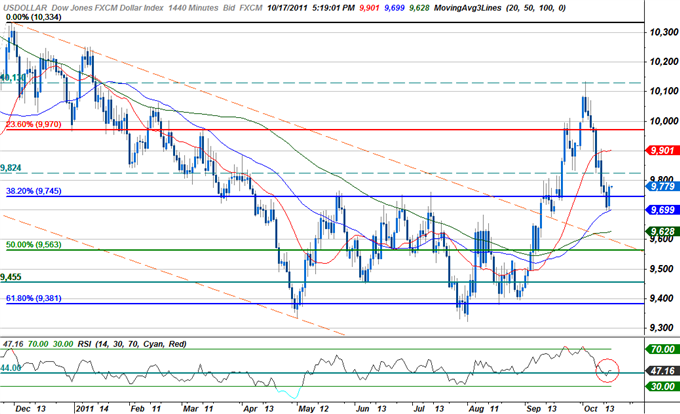 The greenback snapped a three day losing streak today with the Dow Jones FXCM Dollar Index (Ticker: USDollar) climbing 0.63% by the close of North American trade. Equity markets were in a steady decline throughout the session as investors scaled back on risk assets with the Dow, the S&P, and the NASDAQ falling 2.13%, 1.94%, and 1.98% respectively. Debt concerns were rekindled after officials failed to produce a viable plan to avoid a Greek default and recapitalize ailed banks at the G20 meeting this weekend and although leaders cited plans to be released by next weekend’s EU meeting, comments made by German Chancellor Angela Merkel suggested that the resolution will not be the “silver bullet” markets participants were searching for. Accordingly investors went back on the defensive with higher yielding assets and risk currencies sliding across the board.

The dollar pared early losses as stock continued to slide throughout the session. The index broke back above the key 38.2% Fibonacci extension taken from the June 2010 and November 2010 crests at 9745 after encountering support at the 50-day moving average just shy of 9700. A hold above this level remains paramount for the greenback with a break below risking substantial losses for the reserve currency. Look for the slope of daily relative strength to steepen after rebounding off RSI support at the 44-level. 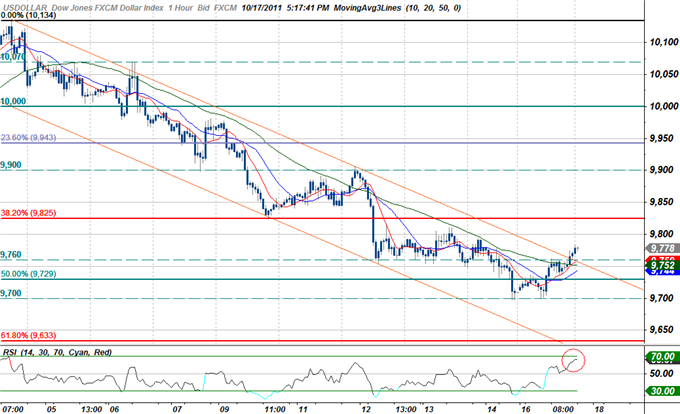 A closer look at the index shows the dollar breaking out of a well defined descending channel formation dating back to October 4th with the greenback likely to move higher as investors seek refuge from growing global growth and default concerns. Interim resistance now stands at the 38.2% Fibonacci retracement taken from the August 1st advance at 9825 with subsequent ceilings seen at 9900 and the 23.6% retracement at 9943. Immediate support rests at 9760 backed by the 50% retracement at 9730 and 9700.

The greenback advanced against three of the four component currencies highlighted by a 1.77% advance against the Australian dollar. As market sentiment takes a defensive stance, the aussie is likely to remain under pressure as investors jettison higher yielding assets in favor of the safety of the greenback. Overnight the RBA releases minutes from the October 4th policy meeting which could add pressure on the battered aussie as the central bank highlights growing uncertainty regarding both the European sovereign debt crisis and prospects for global growth. The yen tops the performance charts at the close, just as it did at the open, advancing 0.50% against the dollar after moving a full 142% of its daily average true range. Despite much speculation, the yen has maintained its haven appeal and remains well supported on the back of risk-off flows. However as the USD/JPY pair approaches pre-intervention levels, investors may find it increasingly difficult to move into the yen on concerns of further action from the Bank of Japan.

Tomorrow’s economic docket is highlighted by the September producer prices report with consensus estimates calling for price pleasures to ease with a print of 0.64% y/y, down from 6.5% y/y. Traders will also be lending a keen ear to remarks made by Fed Chairman Ben Bernanke tomorrow when he speaks to the Boston Fed Bank on the long-term implications of the great recession. The dollar should remain well supported so far as investor appetite remains subdued, with risk assets likely to continue to pare some of the sharp advances seen last week.