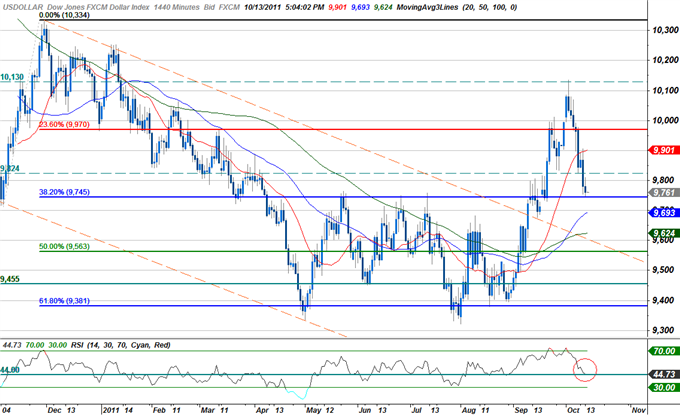 The greenback was weaker at the close of North American trade with the Dow Jones FXCM Dollar Index (Ticker: USDollar) off by 0.29% on the session. Equity markets spent the majority of the day paring early losses after global growth concerns were rekindled on the back of weaker than expected trade data out China. The major averages were mixed at the closing bell with the Dow and the S&P sliding 0.35% and 0.30% respectively, while the NASDAQ managed to close in the black with a gain of 0.60%. The recent rally in equities remains at risk however as the advance fueled by optimism over the European crisis may be over extended at this point. Today cautious investors took some risk off the table but remain poised as we await further developments regarding the ongoing sovereign debt crisis in euro region.

The dollar pared early gains throughout the session as risk assets slowly fought their way back. The index continues to hold above the key 38.2% Fibonacci extension taken from the June 2010 and November 2010 crests at 9745. A hold above this level remains paramount for the greenback with a break risking substantial losses for the reserve currency. Note that daily RSI is now testing support at the 44-level. 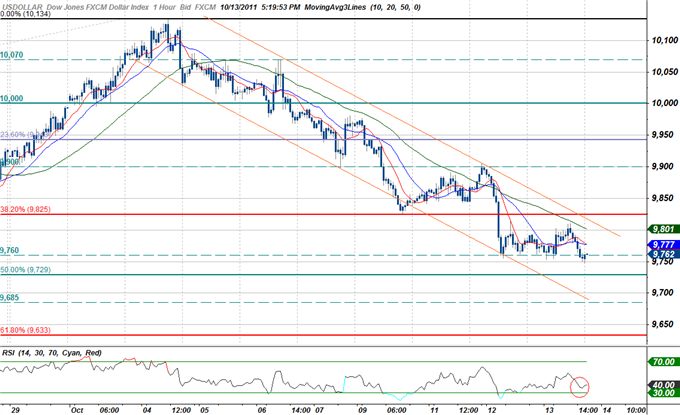 A closer look at the index shows the dollar holding within a well defined descending channel formation dating back to October 4th. Interim support now rests at the 50% Fibonacci retracement taken from the August 1st advance at 9730 with subsequent floors seen at 9685 and the 61.8% retracement at 9633. Topside resistance holds at the 38.2% retracement at 9825 backed by 9900 and the 23.6% retracement at 9940.

The greenback fell against three of the four component currencies highlighted by a 0.53% decline against the Japanese yen. We highlighted the currency’s advance in this morning’s Winners/Losers report with the yen continuing to pare the sharp losses seen yesterday. The USD/JPY pair now rests just above key support at the 38.2% Fibonacci extension taken from the September 9th and October 12th crests at 76.80 (Updated Chart).The aussie and the sterling saw modest advances of 0.11% and 0.53% respectively. The euro was virtually unchanged at the close of trade in New York, sliding a mere 0.05% after rebounding off support at the 1.37-figure early in the session (Updated Chart).

Tomorrow’s economic docket is highlighted by the September advanced retail sales report and the October University of Michigan confidence survey. Consensus estimates call for sales to increase by 0.6%, up from a flat read the previous month, with consumer confidence expected to climb to 60.0 from 59.4. The data has the capacity to fuel the recent shift into risk assets with the dollar likely to remain under pressure should investor appetite continue to improve.