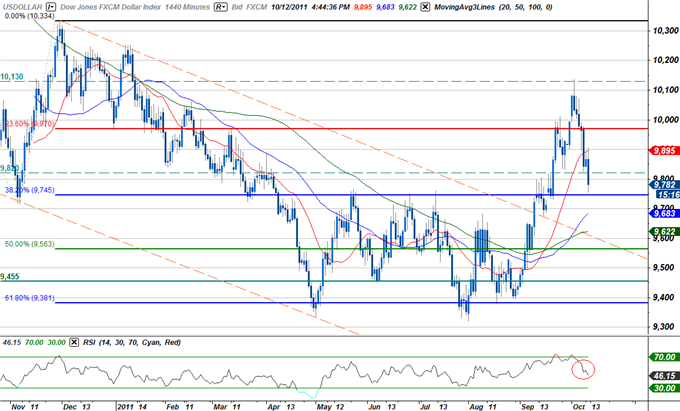 The greenback was sharply lower at the close of North American trade with the Dow Jones FXCM Dollar Index (Ticker: USDollar) sliding 0.63% on the session. Equity markets rallied for the better part of the day before significantly paring gains in the last hour of trade with the Dow, the S&P, and the NASDAQ closing higher by 0.90%, 0.98%, and 0.84% respectively. Markets continued to rally on hopes that the Slovakian parliament would inevitably vote to expand the EFSF bailout fund until an article by the Financial Times sparked a substantial sell-off late in the day. A report suggested European banks may look to sell-off assets as opposed to raising new capital to meet EU demands for higher capital ratios. The move would likely cause further contraction in credit and could greatly impact growth prospects for the already battered region and threaten the stability of the financial sector.

The dollar was on the defensive throughout the session as a surge in risk appetite saw equities and higher yielding currencies soar at the expense of the greenback. The index broke below interim support at the 9820 level cited in yesterday’s USD Trading Report before finding solace just above the 38.2% Fibonacci extension taken from the June 2010 and November 2010 crests at 9745.This level remains key for the greenback with a break risking substantial losses for the reserve currency. 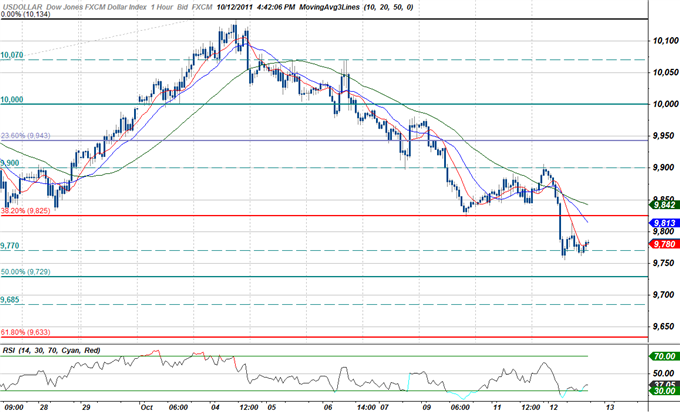 The greenback fell against three of the four component currencies, highlighted by a 2.10% decline against the Australian dollar. Higher yielding currencies like the aussie and the kiwi surged as investor appetite picked up on eased concerns over the European debt crisis. Note that these concerns are likely to be rekindled as Europe’s largest banks now consider the benefits of shrinking the size of their balance sheets as opposed the undertaking the difficult task of raising capital to meet stricter capital reserves ratios. The sterling and the euro were also significantly higher at the close as investor’s jettisoned the dollar in favor of yields. The yen was the worst performer of the lot with a loss of 0.82% against the greenback. The low yielder surged in overnight trade before a massive sell-off sharply reversed the advance, with the yen falling against all its major counterparts by the close of trade in New York.

Minutes from the latest FOMC meeting revealed a softer tone for domestic growth with the report citing “considerable uncertainty,” as the recovery remained “more vulnerable” to shocks. Highlighting the minutes were talks of QE3 with officials seeking to retain the option of another round of quantitative easing which was quoted as being a “more potent tool.” The implications for the dollar are paramount with another round of QE likely hit the dollar hard as the system is flooded with excess liquidity.

Tomorrow’s economic docket is highlighted by the August trade balance and weekly jobless claims report. Consensus estimates call for the trade balance to show a deficit of -$46.0B, down from the previous print of -$44.8B, with weekly claims seen rising to 405K from 401K. The data has the capacity to shift investor focus back on to the domestic prospects, especially after the Fed’s cautious outlook for the economy. The dollar now stands at risk having fallen six out of the past seven sessions. However with today’s late day sell-off unnerving investors, the reserve currency may yet find some support as global growth concerns come back into focus.