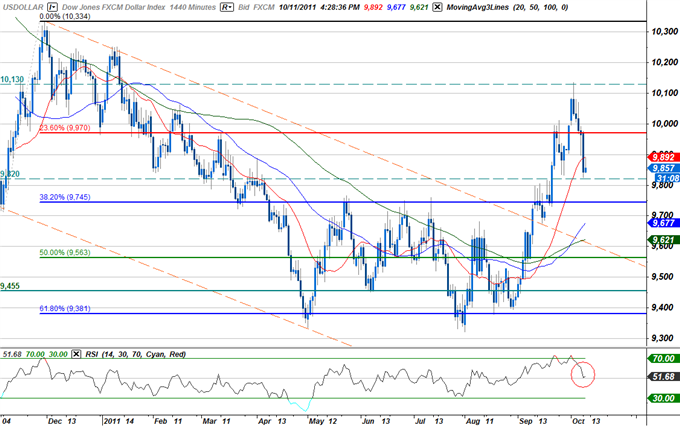 The greenback is virtually flat at the close of North American trade with the Dow Jones FXCM Dollar Index (Ticker: USDollar) higher by just 0.01%. Trading in the New York session lacked conviction with the major indices drifting in and out of positive territory throughout the day. The Dow was lower at the close with a decline 0.15% while the S&P and the NASDAQ were higher by 0.05% and 0.66% respectively. Investor’s were eagerly anticipating results from Slovakia as the parliament voted on the expansion for the EFSF bailout fund. News that leaders had rejected the 1st vote came after the close, with the risk currencies sliding in afterhours trading.

The dollar advanced early in the session before paring gains in the afternoon, with the index holding just above the 9820 interim support level. The dollar moved just 54% of its daily average true range as markets lacked the directional momentum needed to break its current range. 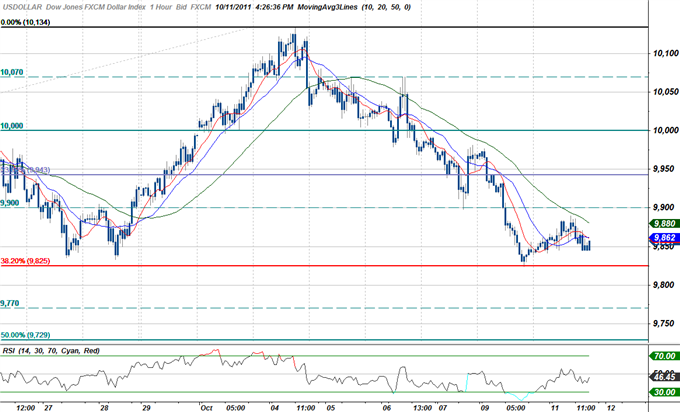 A closer look at the index attests to the dollar’s run-up in European trade well into the US session, holding just above key support at the 38.2% Fibonacci retracement taken from the August 1st advance. A break below interim support sees an increased risk for substantial losses for the dollar with subsequent floors eyed at 9770 and the 50% retracement at 9730. Topside resistance holds at 9900 and is backed by the 23.6% retracement at 9940 and the psychological 10,000 threshold.

The greenback was mixed against the component currencies with the 0.33% advance against the sterling offset by a 0.25% loss against the euro and a lackluster performance against the yen and the aussie. The pound is likely to remain on the defensive as concerns over the health of the fragile economy continue to take root. Last week the BoE decided to increase their asset purchases to £275B from £200B in an effort to boost further liquidity into the system, and with interest rate expectations continuing to diminish, the sterling will likely come under further pressure in the weeks ahead. Although the euro remained rather resilient in the face of today’s much anticipated Slovak vote, the single currency may quickly go back on the defensive as investors react to the news that parliament had rejected to expand the EFSF, with political gesturing weighing on the country’s ability to reach a consensus. Accordingly we may see the recent rally in risk quickly fade as investors look to move back into lower yielding ‘safety’ assets like the dollar as economic uncertainty reaches a climax.

Tomorrow’s economic docket is light on data, but presents event risk nonetheless with the release of the FOMC meeting minutes highlighting the calendar. Investors will be closely eyeing the minutes for insight into the number of dissenters and a look at the broader sentiment for the voting members. Traders will be specifically looking for hints of further quantitative easing measures as the Fed remains poised to support the ongoing recovery. However with recent economic data meeting or beating expectations, the central bank may maintain its wait-and-see approach, with Chairman Bernanke likely to keep the door open for further Fed action. If the minutes reveal further dissention among voting members, look for the dollar to remain well supported as the growing uncertainty weighs on risk. A more dovish tone may see the greenback go on the defensive as speculation for further dollar diluting, quantitative easing measures weigh on the reserve currency.