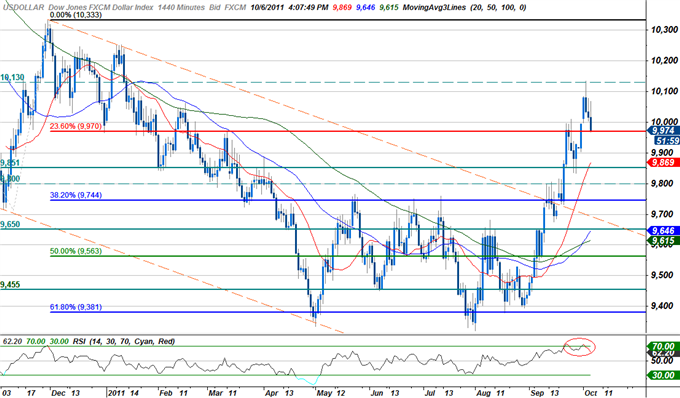 The greenback fell for a third consecutive session in North American trade with the Dow Jones FXCM Dollar Index (Ticker: USDollar) declining by 0.44% on the day. The losses come on the back of another stellar performance in equities with all three major indices paring early losses to close at session highs in New York. The Dow, the S&P, and the NASDAQ surged 1.68%, 1.83%, and 1.88% respectively as Treasury sold off with yields rising across the curve. This morning’s winners/losers report highlighted how the ECB and BoE interest rate announcements sparked wide spread volatility in currency markets as investors reacted positively to the fact central banks were looking to expand easing measures to shore up distressed banks and ensure the flow of liquidity. However with key employment data on tap for tomorrow, traders will remain poised to react to what promises to be a momentous print.

As noted in yesterday’s USD Trading report, the greenback broke below the psychological 10,000 level before encountering support at the 23.6% long term Fibonacci extension taken from the June 8th and December 1st 2010 crests at 9970. This level remains paramount for the dollar with a break below risking substantial losses for the reserve currency. 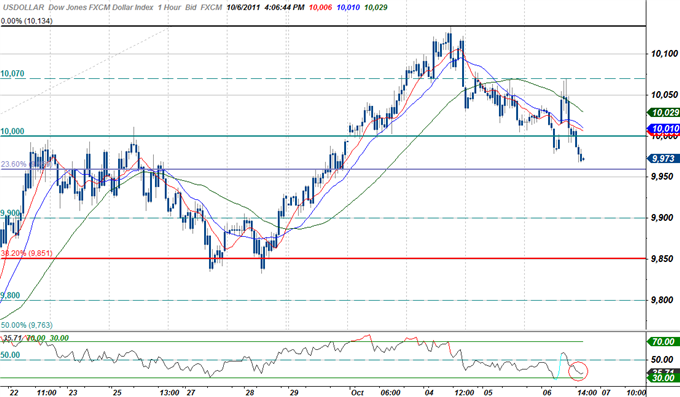 A closer look at the index attests to the dollar’s decline after pulling back sharply from nine-month highs at the 10,130 level on Tuesday. The dollar attempted to break higher early in the session but encountered strong resistance at the 10,070 level before breaking back below 10,000. A break below daily support at 9970 encounters interim support at the 23.6% Fibonacci retracement taken from August 30th advance at 9960. Support below this level doesn’t appear until 9900 and is backed by the 38.2% retracement at 9850. Interim resistance holds at 10,070 with subsequent ceilings eyed at 10,130 and 10,200.

The greenback fell against three of the four component currencies, highlighted by a 1% decline against the Aussie which surged today on improved risk appetite. The Australian dollar (Chart) is nearly 400 pips off Tuesday’s low and remains just below crucial resistance at the 100% Fibonacci extension at 9765 mark. The sterling was the worst performer against a weaker dollar after the BoE announced that it planned to expand its asset purchases from &pound;200 billion to £275 billion in an effort to support the ailed economy. The pound is likely to remain under pressure as these currency diluting measures take effect.

Tomorrow’s economic docket is highlighted by the much anticipated non-farm payroll report where investors will get a detailed breakdown on the health of the employment sector. Consensus estimates call for September payrolls to rise by 55K after last month’s dismal flat read. With concerns of a possible double dip recession and sluggish global growth prospects taking root, the print has the capacity to alter the economic outlook for the world’s largest economy as unemployment remains stubbornly high at 9.1%. The greenback stands to benefit from a weaker print as trader rush into the safety of the reserve currency in times of uncertainty. A stronger print is likely to support the recent rally in risk as confidence in the recovery builds.

To be added to Michael’s email distribution list, send an email with subject line “Distribution List” to mboutros@dailyfx.com.