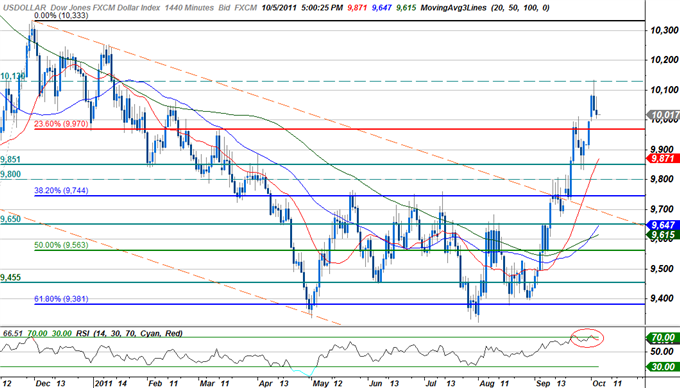 The greenback was markedly weaker at the close of yet another volatile session in North American trade with the Dow Jones FXCM Dollar Index (Ticker: USDollar) declining by 0.37% on the day. A lackluster performance in equity markets early in the session amassed some momentum throughout the day with the Dow, the S&P, and the NASDAQ surging 1.21%, 1.79%, and 2.32% respectively to close at session highs. As market participants turned optimistic that European officials will do what is necessary to support the ailed banking sector, the dollar came under pressure as investors chased yields. So called “risk currencies” surged across the board with aussie, the kiwi, and the loonie all advancing nearly 1% on the session.

As noted in yesterday’s USD Trading report, the greenback continued to move lower as a surge in risk appetite fueled flows into higher yielding assets. The index closed above session lows, closing just above psychological 10,000 mark. Key support now rests at the 23.6% long term Fibonacci extension taken from the June 8th and December 1st 2010 crests at 9970.

A closer look at the index sees the dollar approaching interim support at 10,000. Although RSI suggests the dollar could remain under pressure here we note that so long as the signal line remains above oversold levels the index may see scope to move higher with a rebound off 10,000. Topside resistance holds at 10,130 with subsequent ceilings eyed at 10,200 and 10,250. A break below interim support eyed subsequent floors at the 23.6% Fibonacci retracement taken from August 30th advance at 9960 and 9900.

The greenback fell against two of the four component currencies highlighted by a 0.90% decline against the Australian dollar. The aussie continues to benefit from improved risk appetite with the high yielder advancing against all its major counterparts in North America trade. The sterling was the weakest of the lot, sliding more than 0.17% ahead of the Bank of England’s interest rate decision tomorrow. While the central bank is certain to leave rates unchanged at .50%, speculation that the MPC will look to expand its asset purchase program in an effort to shore up the ailed recovery continues to weigh on the pound. The euro was virtually unchanged on day, sliding a modest 0.05% as investors remained wary ahead of the ECB interest rate decision also on tap for tomorrow. Credit Suisse overnight swaps are factoring a 55% chance that the central bank will look to cut rates as the threat of systemic contagion gains traction. We find it unlikely the bank will move on rates as inflation remains above the ECB targeted rate of at or below 2%. The July print showed Euro zone CPI holding at 2.5% y/y.

Tomorrow’s economic docket is rather light with only weekly jobless claims on tap. Claims are expected to increase to 411K from a previous read of 391K with continuing claims easing by 4K to 3725K. Investors will be anticipating Friday’s more encompassing non-farm payroll figures for a closer look at the health of the employment sector with consensus estimates calling for the addition of 60K jobs in September, up from the dismal flat read a month earlier. The fate of the dollar hangs in the balance with the data sure to see a surge in market volatility.