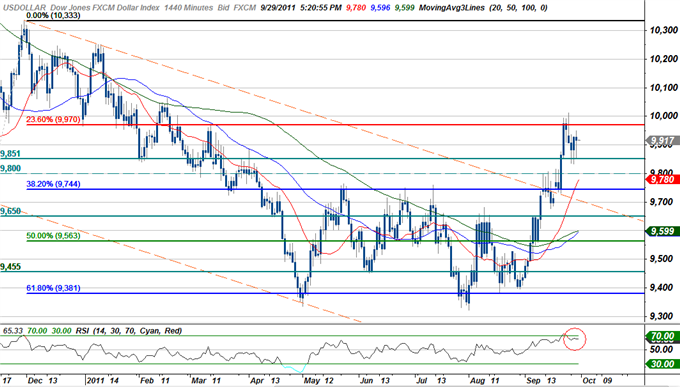 The greenback was marginally weaker at the close of an extremely volatile session in North American trade with the Dow Jones FXCM Dollar Index (Ticker: USDollar) off by just 0.07% on the day. Equity markets saw massive swings throughout the day as news of a downgrade of New Zealand’s credit rating by Fitch to AA from AA+ sent stocks sharply lower before a late day rally pared some of the steep declines. The major stock indices were mixed at the close with the Dow and the S&P closing higher by 1.30% and 0.81% respectively, while the NASDAQ was lower by 0.43%. Better than expected prints on 2Q GDP, personal consumption, and weekly jobless claims were overshadowed by the downgrade, with risk currencies coming under substantial pressure throughout the session.

The dollar held above the 9850 support level as expected but remains vulnerable as relative strength flattens out. Key topside resistance holds at the 23.6% long-term Fibonacci extension taken from the June 8th and December 1st 2010 crests at 9970. A break above this level sees a test of the psychological 10,000 barrier. 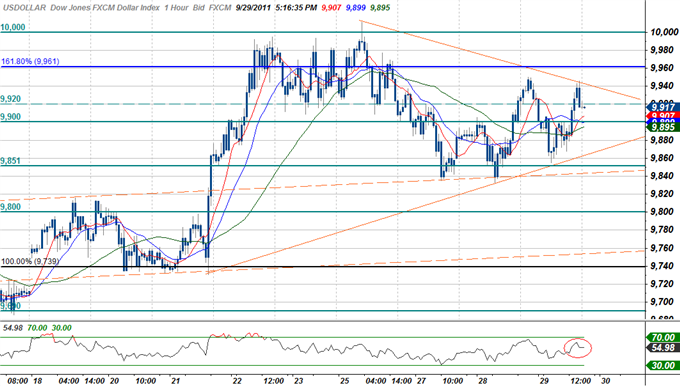 A closer look at the index sees the index consolidating into a wedge formation dating back to the 21st. A topside breach of the formation sees interim resistance the 161.8% Fibonacci extension taken from the August 1st and 17th troughs at 9960 and the 10,000 level. Interim support now rests at 9900 with subsequent floors eyed at 9850 and 9800. As cited yesterday, relative strength held continues to hold above the 50-mark, with a move into overbought territory supporting the case for further dollar advances.

The greenback fell against three of the four component currencies highlighted by a 0.40% decline against the euro. The single currency was bid higher as news that the German parliament had successfully voted to approve the expansion of the EFSF eased debt concerns, with the euro testing 1.3660 in early US trade. The yen was the worst performer of the lot, falling 0.30% against the greenback as demand for lower yielding haven assets waned on news of the German vote. The aussie closed virtually flat on the day after the Fitch downgrade slammed higher yielding currencies. However a late day rally in risk saw the AUD/USD pare losses to close fractionally higher on the session.

Tomorrow’s economic docket is highlighted is highlighted by the August personal income/spending data and the University of Michigan confidence survey. Both income and consumption are expected to have eased last month with consensus estimates calling for a print of 0.1% and 0.2% respectively. The data will be closely eyed by investors after today’s positive read on personal consumption and GDP growth saw recession concerns recede. However if the data print is worse than expected, it’s likely investors will continue to deleverage in favor of haven assets ahead of key data next week on retail sales, industrial production, and the much anticipated non-farm payroll report.